PIAA 6A: Roman gets revenge on Lincoln in state finale 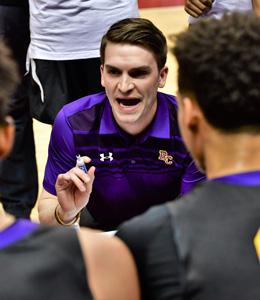 Matt Griffin (above) guided Roman to a state championship in his second season at the helm. (Photo: Mark Jordan/CoBL)

HERSHEY — On one of those memorable streaks as the regular season morphed into postseason play and the stakes grew considerably higher, Roman Catholic’s hoops-playing youngsters had their spiffy run briefly interrupted as they chased Philadelphia’s top entry into state competition.

Well, guess which squad was occupying one of Giant Center’s other locker rooms when Matt Griffin’s Cahillites arrived in Chocolatetown prepped and ready to take home some more hardware?

Yep, it was the same Abraham Lincoln program that handed Roman its only setback since mid-January when the squads squared off earlier this month to decide which of them was going to stay on the left side of the 32-team bracket while the other was going to hang with those on the right.

With that recent setback figuring into its motivation equation, Roman uncorked a wonderfully efficient effort Wednesday night en route to a 92-80 victory over Lincoln in a rapidly paced, back-and-forth affair that would have been just as suited for a Philly Rec Center or a neighborhood playground in mid-July.

“That [earlier loss to Lincoln] motivated us throughout the week,” Griffin said.

“That motivated us during the game and we held on to that.”

What awaited the victor, however, was the PIAA’s Class 6A championship and it was Roman (24-6) that wound up hoisting the gold-tinted trophy and oversized chocolate bar for the third time in four seasons — yet for Griffin’s group and much of his coaching staff it was state title No. 1.

Seth Lundy sparkled throughout for the Philly Catholic League champions, scoring 28 points, snaring nine rebounds, dishing out five assists and blocking two shots as the Cahillites canned better than 62 percent of their field-goal attempts (33-for-53) — and nearly 74 percent (17-for-23) after the break.

“We’ve got good players,” Griffin stated. “This game’s not about plays, it’s about players. I wanted these guys to go out and play with great confidence and they did. They made shots that were open.

“That’s how we win games. We’ve got great players.”

Hakim Hart bagged his last 10 shots from the floor and finished with 26 points, while Lynn Greer III checked in with 20 points. The other player to hit double digits for Roman was Towson recruit Allen Betrand, who totaled 14 points and dropped five dimes despite playing with foul issues.

“Mindset was play together as a team and come out with the win,” Hart revealed.

Lincoln (24-7) was led by wiry 6-3 senior Khalif Meares, who banked 17 of his 28 points in the third quarter while connecting on seven of his nine field-goal attempts. The Railsplitters, who led 8-1 in the opening minutes, also picked up 14 points each from Shikeir Morrison and Emeul Charleston.

“Khalif has been our catalyst for the last few weeks,” Lincoln head coach Al Brown said. “He always brings his ‘A’ game. You don’t have to worry about him defensively. He impacts the game offensively and he looks for all the guys to try to get them involved.

“He just pretty much carried us that quarter, as he’s capable of doing.”

“He’s a terrific player,” Griffin added. “He’s going to be successful wherever he goes.”

Even though Hart’s finish at the rim with 3:17 remaining in the third had the Cahillites holding a 56-47 lead, Lincoln was able to pull within two (61-59) on Meares’ jumper just before the end of the quarter.

Lincoln pulled even with Roman twice in the fourth (65-65 and 67-67) on Meares’ 3-ball and then on Meares’ putback, but once Hart cashed in a transition hoop with 5:24 to go the Cahillites never yielded the lead the rest of the way as Lundy, Hart, Greer and Betrand hooked up for 23 late points.

“Every time we move the ball, everybody scores,” remarked Hart, referring to Roman’s 16 assists.

“That’s how the ball bounces some times,” Brown said. “You can’t coach makes and misses, all you can do is take care of the little things. The rebounding, throw the extra passes, all the things of that nature. At the end of the day, we just came up a little short.”

And when Betrand dropped in a bucket just as the horn sounded, Roman players and coaches were pogoing all over the Giant Center floor just as earlier Cahillites clubs did in 2015 and 2016.

Even though it was a new experience for everyone but Lundy, a freshman on the 2016 unit that was headlined by Penn State sophomores Tony Carr, Lamar Stevens and Nazeer Bostick.

“It is brand new,” Griffin said. “Brand new experience for our guys. And that’s what I think people don’t realize. They say it’s Roman’s third title in four years, but it takes away from these guys. In a sense, it’s a brand new group with a brand new group of coaches, but to get back here took so much work.

“It took so much sacrifice from every player. These guys gave everything they had to get here. And just because we’re Roman, it’s not easy to get here,” Griffin added. “The league we play in is so good. The teams across the state are so good, to get here is truly a blessing.

“The reason why I don’t think we were nervous is we played in big games. … We do that for one reason and that’s so when we get to games like these, we’re ready.”

For Hart, who popped over from Kingsway (N.J.) prior to the 2017-18 school year, Wednesday night’s track meet capped a wonderful postseason run for the sleek 6-5 junior.

“To me, it means a lot, because I’ve got one,” Hart said of winning a state title.

Not only did Hart bag the game-deciding hoop in Roman’s victory over Bonner-Prendergast in the Philly Catholic League title game, but his 25 points and two steals Saturday in overtime helped push the Cahillites past Pine-Richland and into the state title game.

Wednesday night, with Lincoln’s 86-76 victory in the District 12 seed game remarkably fresh in his mind, he capped his season by dropping in a remarkably quiet 26 points.

“It made us come out and play harder,” said Hart, who added three boards and two assists.

Griffin also was jumpy after spending a good portion of the post-game celebration bouncing through Giant Center’s stands searching for family members and friends to hug before returning to the floor.

The 28-year-old skipper, in just his second season since succeeding Chris McNesby, admittedly wished he’d been part of the action that played out at 175 mph several feet in front of him — instead of just directing traffic from his hardly stationary post in front of the Cahillites’ crowded bench.

“I wish I was,” Griffin admitted. “I would trade places with these guys in a second.”

“That’s our pace, that’s our style of play, get up and down the court,” Brown admitted. “I take my hat off to Roman Catholic. They came out and played a good game, and that’s a well-coached team.

“That’s the pace we expected.”

Yet for Lincoln, it was a difficult ending to an otherwise terrific campaign in which the senior-heavy Railsplitters advanced to their first state final — Brown’s high-octane group fell to Carlisle in last season’s second round — despite reaching the PIAA field for merely the second time.

“My guys played a great game,” Brown added. “They had a great season. I’m proud of what they were able to accomplish this year, being the first time Lincoln High School has been to this level.”

“I’m very proud of these guys and what they’ve accomplished this year,” Griffin admitted. “I’m sad it’s over. We had a great group of guys. I just really enjoyed going to practice every day.

“What they’ve accomplished can never be taken away from them. It’s awesome.”