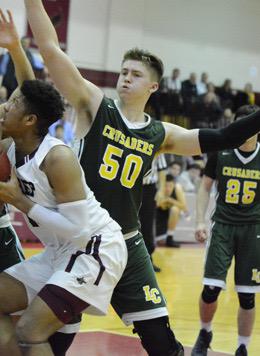 CONSHOHOCKEN -- The first round of the Donofrio Classic continued into its second night of play at the Fellowship House, with two more games taking place in the 58th edition of the annual high school all-star tournament.

Game One: After trailing the Yellow Jackets by between six and 10 points for most of the first half, the Keystone Blazers Black’s depth eventually wore through, as they pulled away for an 84-69 win to set up a second-round match against a powerful WeR1 squad next Thursday evening (April 5). It was a true team effort from the Blazers, who had 10 players contribute to the scoring column, including four in double figures; Vinny DeAngelo (2019/Sun Valley) paced his team with 16, followed closely by 15 from Bishop Shanahan senior Kevin Dodds and 14 from Capital Christian (Md.) senior Fope Okuyigal. Yellow Jackets got 21 points in a typically strong outing from Antwuan Butler (2018/Cardinal O’Hara), plus five 3-pointers in a 17-point outing by Tom Quarry (2018/Father Judge); those two will play college ball at Austin Peay and Johns Hopkins, respectively.

Game Two: While the L&L Rebels led most of the game, PizzaTime kept this one close throughout. Eventually some strong play down the stretch, especially by Phillipsburg senior and Army commit Chris Mann, who had 22 points, led the L&L Rebels to an 84-78 win. They’ll match up with winner of Wednesday’s Team Hardnett and Keystone Blazers Red game. Alex Serrano (Liberty/2018) was the only other Rebels player in double figures with 14 points. Travis Elmore (Pocono Mountain West/2018) and Keeshawn Kellerman (Central Catholic/2018) scored nine and eight points, respectively.. Bartram’s Donte’ DePriest put in a terrific performance in a losing effort, pouring in a game-high 26 points for Pizza Time. La Salle junior Jack Rothenberg scored 12 for Pizza time, including three 3-pointers.

It was February 26, 2017 when Luke Godzieba felt the worst pain he’d ever experienced. The Lansdale Catholic center came down awkwardly on his left leg during a post-season practice with his Crusader teammates, and heard not one but two pops.

“I had a severe meniscus tear and I tore my ACL,” Godzieba said. “It was probably the most painful thing I ever felt, it was radiating, swelled up right away.

“I knew I did something, i was hoping I didn’t do anything bad, but…”

Bad, it was. The initial recovery estimation was 10 months, which would have put the 6-foot-6, 230-pound big man back somewhere around the midpoint of the season, if he was able to get in shape at that point.

Undeterred, Godzieba put everything into his rehab, getting back on the court late in the preseason; when Lansdale Catholic opened its season on Dec. 8 at Souderton, Godzieba was in the lineup for the 51-48 win.

“I felt like Markelle Fultz a little bit,” he joked. “Jittery, I was just going real fast, plays were happening real fast. But after the first half, I settled back in to how I used to play and it’s been getting better every game.”

Godzieba played out his entire senior year with a large brace on his knee, a smaller version of which he was wearing at the Fellowship House on Tuesday night. He admitted he’s not quite yet back to 100 percent, typical considering his injury was still less than 13 months out, but he’s expecting to be close to that by the time the next hoops season starts.

Ursinus college head coach Kevin Small had caught an interest during his junior year, and stayed in touch through the injury. And though other schools like York, PSU-Abington, King’s and Lebanon Valley joined the mix, Godzieba committed to the school that had been on him all along last week.

At Ursinus, he’ll join a program that went 17-10 this year (12-6 Centennial), with a key group of four seniors departing including starting big man Joe LoStracco, though there’s talent throughout the Bears’ roster.

“It’s just the coaching and the tight-knit group that they had,” Godzieba said. “Everybody on the team played well together and it wasn’t like one specific player that was doing all the scoring, it was everybody, it was a real team effort and the coaches were just really good guys.” -- Josh Verlin

Certainly one of the breakout teams this season was Sun Valley. The Vanguards increased their win total by 13 over the year ago, going 19-7, won their first home playoff game in 18 years and set the tone for what could be an even more successful 2018-19.

Leading the way all season long was junior guard Vinny DeAngelo, who became one of the few non-seniors in the area to hit the 1,000-point mark, which he did during the district playoffs; Sun Valley’s season ended at the hands of Northeastern (York) in the first round of the PIAA 5A bracket.

“I thought we kind of exceeded our expectations, no one really believed in us at the beginning of the season, but we ourselves believed that we could do what we did,” he said on Tuesday night. “After seeing what we can do (the offseason is) so much more intensified; you’ve got to set higher goals, higher standards and you’ve got to live up to them.”

DeAngelo’s strong season, which saw him average 22.7 ppg -- second-most in Delaware County, according to the Delco Times’ Matt DeGeorge, earned him his first invite to participate in the Donofrio Tournament, and he didn’t disappoint.

His 16-point outing to lead his team to victory saw his typical slashing abilities put to use, with several impressive finishes around the rim and pull-up jumpers as well; he also had more than a couple assists that showcased strong passing and court vision abilities.

“I actually didn’t hear about (Donofrio) until I started high school basketball,” he admitted, “and then it was definitely one of the things I wanted to do...to get invited to it is pretty cool.”

DeAngelo isn’t the only talented youngster that head coach Steve Maloney has coming back next season. No. 2 scorer Marvin Freeman (13.4 ppg) is also only a junior, as are fellow starters Lance Stone and Issac Kennan. Those four alone should have the Vanguards right in the mix in the Ches-Mont and District 1 5A brackets and beyond.

And the sights are already set sky-high.

“After our state game, I remember we had it within five with two minutes to go,” DeAngelo said. “Right then and there, after that game, we were like we’ve got to get back here and we’ve got to win a game.

“And with the district playoffs, we feel like we have a really good shot next year.” -- Josh Verlin

When KeeShawn Kellman got back to school this fall, his classmates all had one question for him.

“The first question everybody asked me was, ‘How tall are you?” said the Allentown Central Catholic senior forward.

With the new height, he had to get used to some things, like ducking under doorways he was now too tall for. He also had to adjust his game on the basketball court.

“I’m still getting used to it in a way, but I think I’m adjusting to it more and more as days go on,” Kellman said.

As a junior, Kellman said he played more out on the perimeter as an undersized big. He stayed down low as a more traditional post presence this season and put together a breakout year for Central Catholic, averaging about nine points per game for a team that advanced to the PIAA Class 5A quarterfinal.

“I’ve always been an undersized post player, but now I have some size to you use down low,” Kellman said. “It definitely has it’s advantages, just being able to grab the ball over defenders for offensive rebounds, getting tip ins, when I catch the ball down low being able to see over defenders and look for the open guy.”

Kellman said he’s garnered some interest from some Ivy League and Patriot League programs, including Navy, Colgate and Cornell as well as NJIT. But after a breakout senior campaign he announced on Twitter earlier this month that he will take a prep year next season.

As he preps, he also said he will try to work on his shooting and ballhandling to turn himself into a more complete player.

While Kellman is no longer mismatched against opponents down low, he said playing with the mentality he played with before his growth spurt continues to be a big part of his game.

“Just being a shorter big man always made me play very scrappy, physical and aggressive, and I still think I have some of those strengths right now,” he said. --Owen McCue

There are plenty of factors that go into deciding where to go to college: the location, playing time, program prestige, coaching style, etc.

But sometimes the answer to what puts a program over the top is simple, as was the case for Pocono Mountain West senior forward Travis Elmore, who recently gave a verbal commitment to Bloomsburg.

“The campus definitely, that’s what sealed the deal,” Elmore said. “I loved the place.”

The PSAC East school obviously checked off a few more boxes as well for Elmore, who said said he also visited Kutztown and had interest from East Stroudsburg.

Elmore lives about an hour from the school and coach John Sanow preached to him that he was a perfect fit for the program.

“I think it fit pretty good,” Elmore said. “They play fast-paced, up-and-down, and that’s the way I like to play...I can get up and down the court, I like to rebound, so I fit most teams. That’s what coach told me, just keep playing the way I play and I’ll be alright.”

Elmore said Bloomsburg started really showing interest in him about a month ago. The senior forward played some of his best basketball down the stretch of his high school season, as Pocono Mountain West advanced to the second round of the PIAA Class 6A state playoffs.

In team’s opening round win against Chambersburg, Elmore scored 21 points and grabbed 11 rebounds. He scored 14 points in the team’s season ending loss to Hazelton.

Now with his high school season behind him and college picked out, Elmore is excited for the next chapter of his basketball career.

“The season’s over now, so it’s on to new things,” Elmore said. --Owen McCue