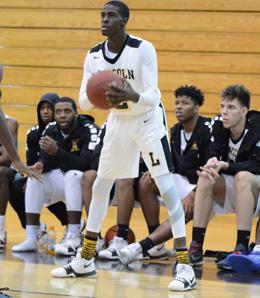 Khalif Mears (above) and several of his Lincoln teammates played in the Donofrio opener on Monday night. (Photo: Josh Verlin/CoBL)

CONSHOHOCKEN, Pa. — The latest edition of the Donofrio Classic began play on Monday night, with the bracket-style, single-elimination tournament of 24 high school all-star teams tipping off for the 58th year.

Here’s a recap from the first two games of the opening night:

Game One: Waterview Danny Rumph and Hunting Park II were dead even for most of the first half, but a late 14-0 run by HPII set the tone for the second half, as they pulled away for a 96-78 win to advance to play Positive Image on Weds., April 4. Six different players scored in double figures for Hunting Park, led by Mastery North junior Jamir Reed’s 18; Khalil Johnson (2019/Hatboro-Horsham) had 15, Shakier Morrison (2018/Lincoln) had 13 and Aaron Harrison (2019/West Philadelphia), Jihad Watson (2019/Martin Luther King) and Tahj Campbell (2019/Mastery North) had 11, 10 and 10 respectively. Reggie Scott (2019/TBD) led the way with 27 points for Danny Rumph, while Bishop McDevitt junior Seneca Willoughby hit four 3-pointers as part of 14 points.

Game Two: The matchup between Del-Val Toros and Triple Threat seemed quite weighted towards one side: Del-Val was full of juniors and seniors, with a roster that showed up 12 deep. Triple Threat, at tipoff, had just five freshmen and sophomores; a sixth showed up early in the first half. But a blowout it was not -- though Del-Val did indeed win, it was only by an 89-86 margin, after Triple Threat had several slim leads late in the second half. Scott Spann (2019/Sankofa Freedom) paced the victors with 31 points, including three crucial 3-pointers late in the second half; California (Pa.) signee Collin MacAdams (2018/Central Bucks West) added 24 in a two-man show. For Triple Threat, Haverford School freshman Jaylen Stinson impressed with a 33-point outing, while Neumann-Goretti sophomore Ahmad Fair dropped 29.

Lincoln seniors warm up for Wednesday

The Lincoln Railsplitters will be playing what is certainly the most important game in the team’s history on Wednesday night, against Roman Catholic in the PIAA 6A championship game.

But despite being just 48 hours away from bringing home what could be the first state title for the Philadelphia Public League school, three of the Railsplitters’ best players first had to help their Donofrio team into the second round.

Khalif Mears, Tyree Corbett and Shakier Morrison all took the court for Hunting Park II in the tournament’s opening game, combining to score 28 points in the victory -- which came only after they had a team workout with Lincoln. But they shook off any concern about playing in such an event just two days before the state title contest, citing the Donofrio’s long history among reasons why it was important for them to come out.

Of all 24 teams to make a state championship between the boys’ and girls’ six respective brackets, Lincoln might be the most surprising of all. The Public League’s ‘B’ Division champs, who shocked Roman in the District 12 title game, survived the top half of a bracket that also included District 1 powerhouses Abington and Lower Merion,

Now they find themselves in a rematch against the Cahillites, which feature high-major targets like junior wing Seth Lundy and sophomore Lynn Greer III, plus senior guard Allen Betrand, a Towson commit. None of the Lincoln players currently have a scholarship offer to play anywhere at the next level.

“We know they’re going to come out real aggressive and they’re going to come at us hard, so we can’t let them get in our heads,” said Mears, who along with Corbett scored 18 points in Lincoln’s district championship win. “We’ve got to stay in our game, continue to do what we’ve been doing.”

Though Lincoln has already quieted many doubters thanks to beating Roman in the district game and then schools like Hempfield, Neshaminy and then District 2 powerhouse Hazleton, the Railsplitters are still very much feeling like the underdogs as they head towards Hershey’s GIANT Center at 8 PM on Wednesday night.

They’re enjoying the ride so far, but considering they’re so close, they want to bring home the first state championship in the school’s history.

“As a senior, it’s been great, a good way to go out,” Morrison said. “Lincoln’s never had nothing, so it’s good to have rings, championships, banners hanging up in the school.”

Well -- Dallas, Pa., located about 10 miles north of Wilkes-Barre up in the far northeast corner of the Keystone state. That’s home to Misericordia University, where Coyle visited this past Friday evening and then committed to head coach Willie Chandler on Saturday morning.

Coyle said he had a feeling his trip north would result in a commitment, even before he went up to see the nearly 100-year-old school of about 2,000 undergraduates.

“I kind of had a feeling going into it, that’s where I wanted to go, I just wanted to make sure I enjoyed myself up there,” he said. “All the teammates were really nice, we played 3-on-3. I just really enjoyed my time up there, and I was just like this is the place I want to go.

The Cougars recent success under Chandler was very much attractive to Coyle, who noted that Misericordia had been to the last two NCAA Tournaments, winning a total of 37 games and a pair of MAC Freedom championships in that time.

Chandler, a member of the Misericordia Hall of Fame, scored 2,898 points during a stellar four-year playing career before graduating in 2003.

“Obviously they’ve got a winning culture up there, they’re returning most of the roster again next season,” Coyle said. “Coach [Chandler] says I’ve got a chance to be the backup point guard next year, and slide into a starting role next season.”

The 6-1 guard was a three-year contributor and two-year starter for Upper Moreland, which made the District 1 5A playoffs this year as the No. 16 seed, losing to top-seeded Penncrest in the first round.

“Definitely have to keep working on my strength, but the coach said they like my jump shot,” he said. “But I’ve got to get back in the gym, weight room and work on my speed, too.”