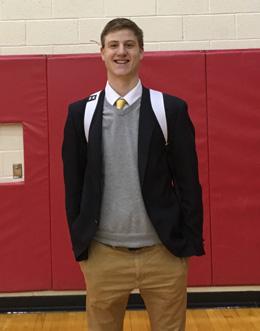 Thomas Schultz (above) put together a double-double to lead Lourdes Regional into the PIAA Class A championship game. (Photo: Michael Bullock/CoBL)

HAMBURG — Even after clipping a piece of the net for posterity, posing for all sorts of keepsake photos with all sorts of well-wishers and maybe even kissing a baby or two, Thomas Schultz stepped back on Hamburg High School’s basketball court Monday night sporting a huge grin.

Even had Schultz smashed any of the hundreds of Hershey’s Kisses that populated the hardwood, he wouldn’t have known because the Lourdes Regional junior also was walking on air.

Nearly popping a triple-double, the 6-5 junior scored 17 points, pocketed 10 rebounds and dished out nine assists as Lourdes flashed terrific ball movement and some wonderfully effective zone defense en route to a decisive 63-38 victory over Faith Christian in a PIAA Class 1A semifinal-round scrap.

Ty Klembara added 15 points — including 12 in the second half — and burly Larry Czeponis finished with 11 points as the Red Raiders (26-4) locked up a spot in Thursday afternoon’s PIAA Class 1A title game opposite two-time state Kennedy Catholic in a 2 p.m. tip at Hershey’s Giant Center.

Hence, the avalanche of chocolate that serenaded Lourdes players, coaches and cheerleaders mere moments after the Red Raiders closed out their seventh consecutive victory.

And while the District 1 champs tried to frustrate Lourdes with early full-court pressure, once James Sandri’s bunch solved it several times the Lions backed off. Of course, it didn’t help that Faith wasn’t making shots consistently (5-for-17 in the first half) and couldn’t lock on its press.

Lourdes started quickly at both ends, however, using its motion offense to attack the basket and its matchup 2-3 zone to freeze the Lions in their tracks at the other. Up 12-7 after one quarter, the Red Raiders created all sorts of separation in the second while stretching their lead to 28-11.

“Early in the game, we wanted to prove that we could score against them and prove to ourselves that we could play with these guys because that was a very good team that we played tonight,” Schultz admitted. “To get off to a good start and getting points and getting stops is crucial.”

“I knew we could win if we could start off well and continue,” Sandri said. “And we did that.”

With Schultz, the 6-3 Czeponis and the 5-10 Klembara effectively working the back line of Lourdes’ stingy zone — with additional help coming from 6-0 senior sixth man Dawson Williams — Sandri’s bunch outrebounded Faith 17-4 in the first half and finished with a 31-22 edge.

Czeponis and Klembara each wound up with eight boards, while Williams snared three.

Faith never got closer than 15 the rest of the way.

“That team is a solid team,” Sandri said. “They destroyed teams. They’d come out firing 3s from all over. I knew we could score, but it was defensively could we hold them.

“Those kids — Adam Sandri and C.J. Reichard — moved like rabbits up top,” Sandri continued. “And then Ty, Thomas and Larry just controlled the boards.”

While all five Lourdes starters landed in the scorebook in the opening half — the constantly moving Schultz pocketed 12 first-half points — each of the Red Raiders had dropped at least two dimes. By the end, Lourdes had assisted on 19 of its 22 made field goals.

“In our scouting report it says, ‘It’s not important who scores but that we do score,’” Schultz indicated. “The extra pass goes a long way in making an OK shot an easy shot. We look for our teammates. We’re brothers, man, and we look for each other so we can get that easier shot.”

So, lots of things were going well for Sandri’s District 4 champions at both ends — the defensive end was where the Red Raiders really made an impact while keeping a lid on the Lions.

“Our 2-3 is a lot different than other people play it,” Sandri admitted. “We move [in it] and we have a little bit of a rotation and it’s hard to pick up.”

“They surprised me, because we kind of play the same matchup, it’s a matchup zone,” DaCosta said. “So we practice against it and it’s a replication of what we do. So I’m not quite sure why we were kind of trying to figure it out. … We just didn’t attack and we got stagnant and we stood instead of just being instinctive. And when you think and it’s not instinctive, that’s not basketball.

“You’re not going to win that way.”

Although Faith picked up its energy level in the third quarter, DaCosta’s Lions never mustered a legitimate charge at the Red Raiders. One sequence was especially telling, as Charles Ervin drew a foul from Czeponis that seemed to light up Faith — yet a tick or two later was assessed a technical.

Ervin, who finished with just three points, fouled out early in the fourth quarter.

Sawyer Smith, Faith’s 6-7 senior and the hero of the Lions’ overtime conquest of Girard College in the District 1 title game, also found Lourdes’ zone extremely troubling. The Lions’ big fella knocked down his first look, yet would go on to miss his next eight shots and finished with two points.

“I don’t see a lot of teams playing the matchup that we play,” Schultz said. “A lot of teams come in confident, but they’re not really truly ready for it.

“That’s what makes us a pretty good team, when we play defense like that.”

As well as Lourdes played for lengthy stretches, Faith fought through all sorts of struggles.

“Not really sure I have an explanation. We prepared like we usually do,” DaCosta admitted. “They’re a good basketball team. No team is making the Final Four and being here by accident. You’ve done some things and you’ve beat some teams to get to this point.

“So a credit to them for basically disrupting what we’ve normally been able to do. Listen, we get a lot of points off of transition and creating turnovers — and they didn’t turn it over and they took care of the basketball. They made free throws (15-for-23),” DaCosta added.

“At this point, [it’s about] being prepared and being ready, but they were. Unfortunately, we weren’t able to win out.”

Even in the third quarter, when it appeared as if the Lions were ready to gain some traction and mount a comeback, Lourdes promptly authored a response. Two came from Klembara, who buried an early trey and another one just before the end of the quarter that had the Red Raiders up 41-21.

More offensive pop came from guards Sandri and Reichard, who finished with nine and eight points, respectively, for the balanced Red Raiders.

The only drama that remained was whether or not the multi-talented Schultz, the Vanderbilt baseball commit, would be able to complete his triple-double and just how long after the final buzzer would the Lourdes student section wait before showering the floor with Hershey’s Kisses.

Let’s just say it was no and not long.

What had taken much longer was the time between state championship appearances for the Shamokin-based Red Raiders. Lourdes’ last trip to a state final was in 1990 — a little more than a generation ago — when a squad featuring assistant coach Matt Reiprish and Mount Carmel frontman John Lazicki squeezed past Kennedy Christian (now Kennedy Catholic) 55-54.

“We have lost to nobody less than 4A still, and we have yet to lose to a Single-A school,” admitted Sandri, whose club dropped regular-season contests to 4A entries Danville, Shikellamy and crosstown rival Shamokin and then fell to Class 5A Blue Mountain in the Schuylkill League playoffs.

“Whether that continues on Thursday [remains to be seen], however we’re up against a tall task. I’m just happy. We’ve been playing hard. We’re playing physical. We’re playing smart.”

And they’re also one of 12 teams slated to play during Pennsylvania’s championship weekend.

No wonder Schultz had a piece of the net resting behind one of his ears.

He and his teammates also stood beaming behind a sign that read, ‘HEADING TO HERSHEY,’ before they each took turns climbing a ladder in order to cut down a celebratory net.

Even after a quick shower and a return to his civvies, Schultz was still giddy.

“It’s a really great feeling right now, but I’m not sure [how I feel]. I’m still not sure,” Schultz said. “I don’t really know what’s going on right now. I didn’t come down yet.

“A lot of us have played together since we were six years old. To finish it like this together and go to the state championship and go to Hershey, the atmosphere is going to be fantastic. It’s going to be a fun week, but we’ll prepare and we’ll be ready. We’ll see what happens.”