PIAA 5A: Well-rounded effort helps Bonner get by Allentown CC 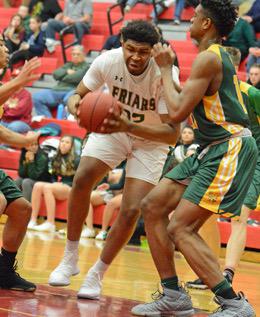 READING--Throughout Bonner-Prendergast’s season, Friars’ head coach Jack Concannon has preached to his team it is going to take a collective effort for them to accomplish their goals.

The Friars are led by a trio of Division I talents in junior guard Isaiah Wong, the Philadelphia Catholic Player of the year, Rider commit Ajiri Johnson and junior forward Tariq Ingraham.

In a tightly contested against Allentown Central Catholic on Friday night at Reading High School, the Friars got 27 points from Wong, but they also got some help from their supporting cast, particularly in the first half when Johnson and Ingraham were quiet.

The well-rounded effort helped deliver Bonner a 71-61 win and send the Friars to the state semifinals, where they will play Abington Heights on Monday.

“We’ve been saying it all year, 4, 5, 6, 7,” Concannon said. “Everybody knows our three can play. They can score and do things, but what about the other four guys? And they came through tonight, played well. When you get to this point you can’t win with three guys.  You need six, seven, eight guys.”

With Allentown locking down on Wong, Johnson and Ingraham from the start, Bonner needed some help from its other parts early on.

Up stepped Yohance Garner. The senior guard started the season as a bench player for the Friars, but after an injury to sophomore Tyrese Watson, he became part of the starting rotation alongside those three and junior guard Mike Perretta.

Garner knocked down two open 3-point shots in the game’s first three minutes to help Bonner jump out to an 8-0 start and keep the Allentown defense honest throughout the rest of the game.

“They weren’t going to guard him,” Concannon added. “They were going to double the bigs and double Isaiah and let’s make somebody else beat us, which is a good strategy. He stepped up and made two threes and it got us off to a good start. It was huge.”

After a timeout by Allentown, the Vikings scored 10 of the game’s next 11 points to go up 10-9 with about two and a half minutes left in the first quarter. The lead was shortlived as Johnson got a quick basket on the other end, and Wong beat the buzzer before the end of the period to put the Friars up 13-10 heading to the second.

Bonner built up a 29-16 advantage with a little more than two minutes to go in the first half. While Wong scored nine points in the first half, Ingraham had just two of his 11 points and Johnson had just five of his 15 points before the break.

The Friars got six points from Garner, four points from sophomore guard Donovan Rodriguez and three from Perretta, who has knocked down plenty of them this season, to go into the half up by.

Though Bonner looked to have taken control of the game, the Vikings reeled off seven straight points to end the half then knocked down two threes one minute into the second half to tie the game. Bonner scored six straight in response to the run, but Allentown made sure it never let the game out of reach, keeping the Friars within six for the rest of the quarter, largely due to the 3-point shot.

Senior guard Jay Vaughn knocked down four 3-point shots, all well beyond the arc, to finish with 17 points, 13 of which came in the second half. Junior Chad Kratzer added another 17 points off the bench, including one 3-point shot. Senior guard Dat Lambert and junior wing Nick FIlchner scored 10 and eight points, respectively, each knocking down a pair of threes.

“We had to get out on their 3-point shooters and make them finish at the rim,” Concannon said. “They hit a couple really deep threes and you’re telling the kids, ‘Get out on him. Get out on him.’ They’re like, ‘Do I really have to guard him 35 feet from the basket?’ But yeah you do.”

After trailing by six to start the fourth, Allentown cut Bonner’s lead down to one with early in the second. Free throws by Bonner gave the Friars’ some breathing room before their best player put the game out of reach.

Wong scored a bucket with a little less than five minutes left in the game to put the Friars up by five. He picked up a steal then assisted a Rodriguez bucket to advance the lead to seven. After a deep three by Vaughn, Wong forced the issue on the other end and got himself to the free throw line, where he knocked down two shots, making it 58-52 Bonner with 3:46 to play.

The 6-foot-3 guard picked up another assist to Johnson to put the Friars back up seven and added a free throw to give Bonner a 62-54 lead with 1:43 left, the team’s largest lead since the 8-0 run to start the game. Wong scored 13 points in the fourth quarter, going 11-of-12 from the line to help put the game away. Along with his 27 points, he added four assists, six rebounds, two blocks and a steal.

“A player of his caliber makes plays, you just gotta let him go. You don’t want to overcoach a kid like that. You just let him go and make a play. That’s what he does. He’s a playmaker, whether it’s for himself or his teammates. That’s what makes him so special. He can get his own, but he also makes other people better.”

The Friars have gone eight deep in their last two games. Sophomore guard Mahir Sharif, who had a tip-in in the third quarter to extend a one-point lead to three, and freshman wing James Welde have come off the bench with Rodriguez in recent games.

In Monday’s game against Abington Heights, it could be one of them who has to make a big play.