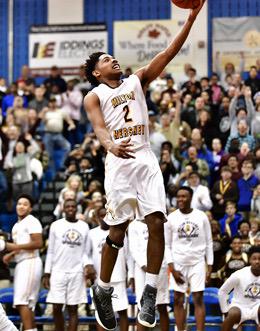 NEW HOLLAND — As they prepped for their latest all-or-nothing postseason outing, Milton Hershey skipper Mark Zerbe posted a concise message that turned out to be mighty profound.

Sensing the opposition might start quickly and put his surging club in arrears — which they did — Zerbe just wanted his talented yet undersized bunch to maintain their composure and hang in there. He figured his explosive group would have an opportunity to make its own timely run.

The early run by the guys on the other bench, as well as the necessity for on-court composure throughout the 32-minute exercise. Even the possibility of his own squad erupting and uncorking a timely run, something that anyone who’s watched the Spartans, knows can happen at any time.

Closing out the contest with a timely salvo that ultimately scuttled the opposition, Milton Hershey motored past Archbishop Carroll 73-65 in a terrific PIAA Class 5A quarterfinal-round encounter before an amped-up gathering Friday night at Garden Spot High School.

Electrically charged Don’yae Baylor-Carroll netted 13 of his 23 points in the fourth quarter, while Pedro Rodriguez chipped in 21 more as the Spartans (26-5) bumped their winning streak to seven games and claimed one of the four spots reserved for those in Monday’s state semifinals.

Josh Parra came off the bench to add 11 points and seven rebounds for Milton Hershey, which will take on WPIAL champ Mars on Monday night at a site and time to be determined.

Mars defeated fellow suburban Pittsburgh side Highlands 60-51 in another quarterfinal.

“Josh has continued to improve throughout the season,” Zerbe said.

“And Pedro is our most improved player from last season, so those guys continue to give us big contributions — and that’s on top of points, whether it’s rebounds or defense or whatever.”

“That’s a really good team and they had to play really well to beat us and they did,” Romanczuk said.

And when Carroll opened the game with eight unanswered points — Hoggard and Justin Anderson (7 points) canned 3-balls in the first 75 seconds — Zerbe’s words became extremely meaningful as his team needed time to find their footing and dig in to counter the Patriots’ quick opening flurry.

“We did and that’s what we hadn’t done in our first two games in states,” said Romanczuk, whose Patriots eliminated Wissahickon and Lampeter-Strasburg. “We got off to slow starts in our first two state games and kind of escaped and survived, but this one was not to be.”

Even when Carroll’s lead grew to 15-4 by the midway point and Zerbe called his second early timeout, Milton Hershey players seemed a bit wobbly.

“When we go down, we keep our poise and we don’t let it worry us,” Baylor-Carroll said. “We’ve been in that situation a lot, especially against high-paced teams and we’ve always managed to fight back. That’s exactly what we did today. We’re really not surprised.” 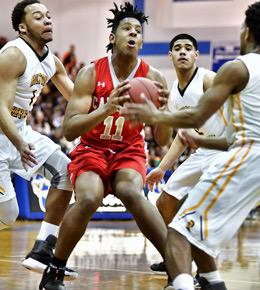 Hey, Milton Hershey trailed by as many as 27 points earlier this season and won by double digits.

“The big word on the board was ‘stay poised,’” Zerbe admitted. “These games a lot of times go right down to the wire. … We knew Don’yae was going to play a better second half than first half, so we just tried to keep him in the flow of the offense and hopefully good things were going to happen.

“Archbishop Carroll is a very talented team. They had a height advantage on us and they’ve got tremendous talent. We have pretty good talent, we have good speed and we play good defense.”

Carroll also sent everyone but the local police department after the 5-9 Baylor-Carroll, who needs just a smidgen of space to get his shot up and over much-taller players. While none of his first three looks fell, his teammates were gladly pitching in and proving the Spartans have much more to offer.

Parra had four early points after checking in. Treyvon Ferguson also had four while trying to keep the dangerous Hoggard in check by making him work for everything he could get.

“We needed more than one guy,” Zerbe said. “We needed multiple contributions.”

While an 8-0 run had the Spartans within three (15-12) at the end of one quarter, Romanczuk’s Patriots responded by opening the second stanza with a 7-0 blast fueled by a couple of buckets in tight from Tairi Ketner. Carroll was able to maintain some order, carrying a 39-33 lead into the lockers.

Aside from a pair of Ferrero pops from the right corner, Carroll couldn’t locate the basket and Zerbe’s opportunistic group pounced, tying the game (46-46) with 23.5 seconds left in the third when Jaiden Young (7 points) canned the back end of a two-shot trip to the free-throw line.

And when Baylor-Carroll popped a step-back 3-ball to open the fourth quarter, the house erupted. Another DBC jumper followed shortly after, extending the Spartans’ lead to five (51-46). While the lead would swap hands five times in the next two minutes, once Parra buried two freebies at the 4:08 mark to push Milton Hershey back in front (58-57) the Spartans never yielded the lead.

Penned in early by Archbishop Carroll’s devoted defensive effort, Baylor-Carroll finished his latest outing by knocking down his last five looks from the field and three of his last four free throws. He also collared five rebounds and hooked up his eager teammates with four assists.

“I was real passive in the beginning because they were real tight on me,” admitted Baylor-Carroll, who had just five points at halftime. “My team and the fans told me, ‘Follow your shot. This is what you do to score. That’s what I managed to do. Get open, knock my shot down and help my team win.”

“Don’yae has the heart of a lion,” Zerbe said. “It’s hard to explain. He just wants so badly to win and he just never gives up. He usually answers the bell and he did again tonight.”

Carroll did pull within one (62-61) with 2:56 to play when Hoggard canned all three of his tries from the line, but the Patriots never could surge back in front. They had it to three (68-65) when Hoggard drilled a 3-ball with 40 seconds left, but Young tossed a length-of-the-court pass to Parra for the answer.

The Patriots tried to respond from deep, but couldn’t get anything to fall. And when Baylor-Carroll poked the ball away from Hoggard in the closing seconds and dropped in a layup, it was over.

“He kind of had an answer for all of them. We threw different players at him and, because of all the attention he gets, he makes his team better. That’s what great players do. When I saw him before, I thought he forced the issue a little bit and I don’t think he forced the issue nearly as much tonight.

“I thought he made some great plays when he had to for others.”

Although Milton Hershey’s players were understandably jubilant, Carroll’s group was just as disappointed by its splendid season coming to an abrupt end — ironically at the same location as last year’s club suffered the same frustrating fate.

Sure, some post-game jawing between these highly competitive groups took place — and there was plenty of jawing and other sorts of things going on throughout the game — but when seasons and careers are riding on the outcome of postseason games sparks will materialize.

“I’m so thrilled [for this group]. This is 10 straight years of 20 wins for this team,” admitted Romanczuk, whose club suffered a blow when Anderson rolled an ankle in the second half and couldn’t go all out. “Do I walk out of here thinking, ‘what if?’ and could this team have gotten state championship? I’ve walked out of a bunch of gyms thinking that we could have gotten a little further or we could have won more games. That’s life and other teams are thinking the same darn thing.

“They had a couple guys that just had a will about them that was unmatched and, like I said, Don’yae Baylor-Carroll is a special kid and there’s going to be one lucky coach in his future.”

And there were a few of the college guys on hand to watch, watch Milton Hershey’s group of racehorses move one round deeper in their collective quest to mine state gold.

“We like the underdog status that we have,” Baylor-Carroll said with a grin.