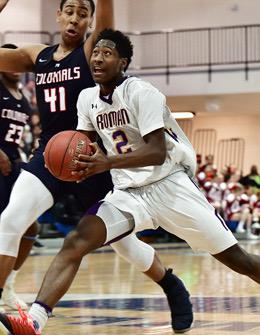 BENSALEM--As Allen Betrand headed out to start the second half of Roman Catholic's state playoff game against Plymouth-Whitemarsh on Wednesday night, his father gave him one word of advice: Attack.

The Cahillities as a whole were stagnant offensively in the first, slowed by 16 turnovers and the imposing presence of PW's 7-foot-2 forward Naheem McLeod there to greet them when they entered the paint. Something was going to have to change if they wanted to erase an 11-point halftime deficit.

Betrand took the ball to the hoop and drew a foul on Roman’s first possession of the second half. It set the tone for what Betrand was set to do for the rest of the contest.

“I listen to my dad a lot,” Betrand said. “My dad at halftime said to attack them, so I attacked them. That’s all it really was.”

On a roster where four different players can go off on any given night, it was his turn to carry the Cahillites to victory.

The 6-foot-3 Towson commit was relatively quiet in the first half with six points. That was not the case in the game’s final 16 minutes as he scored 20 points and made play-after-to-play to help deliver the Cahillites a 75-71 come from behind victory in the second round of the PIAA Class 6A tournament at Bensalem HIgh School.

Allen Betrand pays no mind to the seven footer in his path for the dunk to the quarter. pic.twitter.com/lZ7luG8S6I

When recalling the crucial moments of Wednseday night’s game, it’s hard to find a moment Betrand wasn’t involved in. His fingerprints were all over Wednesday's win.

You could look at his dunk at the end of the first quarter against McLeod that gave Roma a jolt after scoring just four points up to that point in the game, or his putback slam in the third that helped pull the Cahillites within five after trailing by 11 in the second half.

You could point to his 3-pointer to tie the game with four and a half minutes left or his pass to John Kelly for an easy layup that gave Roman its first lead of the game around the two-minute mark. You might even note that the charge he took on the other end to give Roman the ball right back was even bigger.

You could probably find a few more plays scattered in between that were just as important.

“He did everything,” Roman sophomore Lynn Greer said. “He played defense, he was getting to the basket with ease. He was being a great leader.”

“He was just absolutely terrific in this game,” Roman coach Matt Griffin added.

Allen Betrand with the putback slam. Roman within five. pic.twitter.com/B11AIa95Qt

PW jumped out to a 16-2 leading, holding Roman to just one bucket for the first five minutes, 18 seconds of the game. Betrand’s dunk at the end of the first made it 19-6 and sparked an 8-0 run that brought the Cahillites within seven early in the second.

However, PW senior Ahmad Williams was too much to handle in the first. Williams scored 12 of his 20 points in the first half to give the Colonials a 34-23 halftime lead.

Apparently that's just where Roman wanted the score to be.

“We play better when our backs are against the wall,” Betrand said. “Our team, we don’t like winning by a lot. I don’t know. We like playing from behind and coming back. That’s how we’ve been all season.”

Roman trailed by 14 with 6:22 left in the third quarter, but the Cahillites outscored the Colonials 19-6 the rest of the period, including a late take by Betrand to go into the fourth down by just three, 48-45.

Bucketes by Williams and his brother Ahmin, who finished with 11 points, and another by senior Danny Cooper put PW up by eight with 5:42 left in the game, and it looked like the Colonials had survived the scare.

That was not the case. Roman sophomore Hakim Hart drilled a three, then knocked down two free throws, and the Cahillites were back within three before the five-minute mark. What followed was an absolutely exhilarating few minutes of basketball.

Ish Horn lays it up for a Naheem McLeod oop. pic.twitter.com/0s9RasQ5RG

“That’s the most fun thing about basketball when team go back-and-forth like that,” said Hart, who had 14 of his 18 points in the second half.

“That’s what great basketball teams are going at each other,” PW coach Jim Donofrio said. “That’s why you watch.”

Ahmin Williams and Greer traded buckets before a block by Seth Lundy gave Roman a chance to take its first lead. That’s when Betrand found Kelly for the go-ahead basket before taking a charge on the other end. A bucket by Lundy, who finished with 13, grew the Cahillites' lead to four.

Cooper knocked down a three with 41.2 seconds left, but free throws by Betrand and Hart sealed the come-from-behind win and sent Roman to the state quarterfinals to face Central Bucks West on Saturday.

"I think that by just increasing it picked up the tempo in our favor and then Allen Betrand was fantastic, so that was a game changer as well," Griffin said.

PW started the season 27-0, which included wins against Sankofa, Bishop Shanahan, Archbishop Carroll, Bonner-Prendergast and Neumann-Goretti, all state qualifiers in their respective classes.

The team’s first loss came in the District 1 final against Abington. After a win against Dallastown in the opening round of states, the Colonials’ season came to a halt on Wednesday night.

While his team fell short of its goals of winning district and state titles, Donofrio said his seniors, especially the Williams brothers, left their mark on a program that’s seen ton of talent come through over the years.

“The twins established a toughness and a grittiness and a work ethic,” Donofrio said. “We’ve always had great kids just work like crazy at the game, but the twins brought in a mentality that this was a job…The approach to it was so professional and so focused that I just told them it was a privilege to come out to practice everyday.”