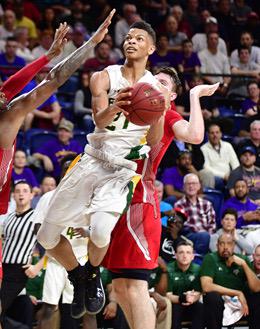 READING--Needing a bucket to put away a second round state playoff win with a little more than three minutes left in the fourth quarter, Bonner-Prendergast coach Jack Concannon went with one of Isaiah Wong’s favorite inbounds plays.

The play is called, “Clutch,” and it was easy to see why Wong likes it so much. The end result was Wong wide open at the top of a key for a 3-point look. The junior guard knocked down the triple, which proved to be a dagger, putting the Friars up by 16.

“I always hit that jumper,” Wong said after the game with a smirk.

There was plenty of smiling for Wong and his teammates in an up-and-down game against York on Tuesday night that was peppered with plenty of highlight plays.

Wong’s triple was his only bucket of the quarter, but he scored 29 points in the other three to finish with 32 total in a 93-73 win against the Bearcats at Reading High School.

The victory sent the Friars to the first state quarterfinal appearance in program history, where they’ll face Allentown Central Catholic on Friday with a PIAA Class 5A semifinal trip on the line.

Isaiah Wong on a personal 10-0 run right now, including this three. Bonner up 38-22 with less than a minute left in first half. pic.twitter.com/h1o3b74xQR

Wong wasn’t the only star lighting up the gym on Tuesday.

York’s 6-foot-2 senior Kyree Generett came into the second round matchup averaging 24.5 points per game in five postseason contests. The red hot guard did not cool down at all against the Friars. He heated up even more if anything.

Generett scored 11 points in the first quarter, knocking down two triples and hitting three free throws after he was fouled on another 3-point attempt. The senior finished the game with 35 points, including six 3-pointers.

While York jumped out to a 17-15 lead after Generett’s big first quarter, Wong and the Friars dominated the second. Bonner turned the game into a track meet, using its defense to get out on the fastbreak, where they sped by the Bearcats for easy transition buckets.

Wong exploded for a personal 10-0 run near the end of the half that helped Bonner head into halftime up 41-27.

“The key was we were playing great defense in the second quarter,” Wong said.

With York in man early in the game, Wong felt like he could get to the basket almost at will. The Philadelphia Catholic League player is extremely difficult to guard in one-on-one situations.

When the Bearcats adjusted defensively at the half, Wong adjusted his game as well, becoming more of a playmaker for his teammates. While Wong added 12 points after the break, another Friar became the star after halftime.

Senior forward Ajiri Johnson scored 20 of his 26 points in the second half. The 6-foot-9 Rider commit scored 15 point in the third quarter, which featured a combined 58 points from both teams and a 24-point lead for Bonner at one point.

He added nine rebounds and two blocks to his stat line to go along with a few two-handed slams that shook the rim. Johnson's work on both ends helped the Friars take a 71-54 lead into the final quarter of play.

“I gotta step up,” Johnson said. “(Wong)’s the guy that everybody wants to go to now. They think he is going to take the game over and they try to stop him, but he did a good job looking for us, and all I can do is finish.”

Though the Bearcats got the lead down to 11 at one point, Bonner's late three made sure there was no doubt about the outcome.

York got 18 points from forward Marquise McClean, including 16 in the second half, but outside McClean and Generett no other Bearcat had more than four points.

In comparison, Bonner got a 13-point, 13-rebound effort from junior forward Tariq Ingraham in addition to Wong and Johnson’s big nights.

In 10 years of eligibility, this is Bonner’s first trip to the state playoffs. The Philadelphia Catholic League runner-ups and District 12 5A champs are trying to make the most of it. Every victory is another first for the school.

“It’s been awesome,” Johnson said. “The school loves it, the community loves it, everybody’s going crazy about it.”

Bishop Shanahan coach Ken Doyle knew the key to his team’s state playoff game against Milton Hershey on Tuesday night was which squad would dictate the style of play.

For three quarters, the teams battled for control of the contest with Shanahan slowing it down and running its sets at some points, while at others the Spartans sped the contest up and got into transition. The result was three-point Milton Hershey lead heading into the fourth quarter.

However, Milton Hershey, the District 3 champs, pulled away in the fourth quarter on the way to 69-61 win that ended what’s been a historic season for Shanahan.

“They want to push the tempo, and we did good job for three quarters of really controlling the tempo and kind of keeping it more our style,” Doyle said. “We just kind of ran out gas, and they were able to push the pace and started making shots in the fourth quarter that were able to separate them.”

The Eagles trimmed the Spartans’ lead to one to start the fourth quarter. Then came a three by Milton Hershey guard Donyae’ Baylor-Carroll. Shanahan senior guard Dan DiBeneditto answered with a three of his own with five and a half to play, but that’s as close as it would get.

Baylor-Carroll, who finished with 25 points, came back down to drill another three. Treyvon Ferguson hit another after that to turn a one-point lead into a seven-point advantage in about a minute of game time. The two buckets were part of a 13-1 run for the Spartans.

A no-look pass from Ferguson to Joshua Para put Milton Hershey up 12 with less than a minute and a half to play. Pedro Rodriguez, who finished with 25 points, made 3-of-4 free throws in the fourth to help ice the win.

The loss ended the careers of four Shanahan seniors who have meant quite a bit to the program. Along with DiBeneditto, David Angelo, who led Shanahan with 22 points, Kevin Dodds and Tom Ford helped the Eagles make history over the past two seasons.

“It’s been a great four years with these seniors,” Doyle said. “They’ve put a lot of time and effort into this program. What we’ve been able to accomplish won’t be able to set in for a while just because they have done so much. Not just this year, but over the last four years.”