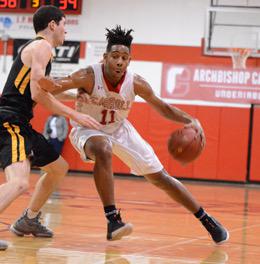 Didn’t matter that Archbishop Carroll’s confident and remarkably talented sophomore guard was standing on the foul line with just a few tense seconds remaining in a single-possession contest that had been see-sawing back and forth for the better part of an hour.

Hoggard was right where he wanted to be under those circumstances.

On the free-throw stripe with the outcome of an all-or-nothing scrap riding on what he did in that particular moment — or didn’t do — with half the gymnasium hooting and hollering at him and the other half nibbling on their fingers and leaving little more than a single knuckle.

“That’s what I live for,” Hoggard admitted. “This is what you live for growing up playing basketball. You want to be put in pressure situations that you can thrive in.

“And tonight I just happened to be in a situation that I love to be in.”

A couple of clean swishes later, Hoggard had his club right where it needed to be — just in case someone from the other side canned a late look that might have won it had the powerfully built 6-2 soph not splashed his freebies. And thanks to those late free throws, Carroll is moving on.

Barely … but nonetheless moving on.

Hoggard’s two free throws with 6.7 seconds remaining in overtime proved to be the difference as Archbishop Carroll squeezed past a valiant Lampeter-Strasburg group 77-76 in a thrilling PIAA Class 5A second-round classic Tuesday night at Governor Mifflin Intermediate School.

While Hoggard finished with 19 points, six rebounds and five assists for Paul Romanczuk’s Patriots (20-7), he had plenty of help as Keyon Butler tossed in 21 points, Justin Andersonwound up with 17 points and Luke House added even more balance with 13 points.

“Oh my goodness,” a relieved Romanczuk said. “This team does not make it easy on me or the fans or anything, but they’ve been resilient. I wish they wouldn’t sleepwalk through the first quarter or so, but that’s the way it’s been for us. We haven’t had any easy ones. We don’t expect it to get any easier.

Carroll needed that scoring balance to offset the gargantuan effort pieced together by Lampeter-Strasburg senior Ryan Smith. Ticketed for East Stroudsburg, The 6-10 Smith racked up 34 points, grabbed 22 rebounds, dished up three assists and even absorbed one charge.

Ed Berryman’s Pioneers (26-5), who led by as many as 12 points in the opening half, also picked up 11 points from Lancaster Bible commit Isaac Beers. And it was Beers’ trey with 0.8 seconds showing that could have changed the outcome of this contest dramatically had Hoggard not cashed in.

Yet add it all up and Carroll had just enough to move into Friday’s quarterfinals and set up a date with District 3 champion Milton Hershey at a site and time yet to be determined.

Although Smith’s putback of his own miss pulled L-S within two (75-73) with 8.0 seconds to go in the extra session, the first-time Lancaster-Lebanon League champs had to play tag quickly on the ensuing inbounds — after a timeout — and had little choice but to pop Hoggard.

While others might have crumbled under the intense spotlight, Hoggard soaked it all up once he stepped to the line and calmly buried two soft free throws. Never a doubt.

Just a short time earlier, with 1:34 to go in OT, Hoggard did the same thing by sinking a pair that erased Carroll’s one-point deficit and put the Philly Catholic League entry up 72-71.

Butler followed suit 24 seconds later, draining both ends of a one-and-one as Carroll’s advantage grew to three points (74-71). Another freebie, from Anderson with 26.4 left, made it a four-point game.

And when Hoggard cashed late to again make it a four-point game, it didn’t matter to Carroll whether Beers’ pop from the left wing dropped or not. The Patriots were back in the quarterfinals.

“Great team victory,” Hoggard said. “Everybody stepped up when they needed to. That’s the type team we are. It’s not just one guy, it’s not about one guy. It’s about the team.

“Anybody can step up at any moment.”

And they did … eventually.

Yet with Smith flashing his vast array of offensive skills throughout the first half — his ability to get locked in and catch the ball from a variety of angles in the low blocks is really neat to watch — L-S opened leads or 24-12 and 30-18, the latter with 2:31 remaining.

Smith finished the first half with 21 points, burying two of his three treys during that stretch.

“That’s a really well-coached team with a kid that can really, really play,” Romanczuk commended. “East Stroudsburg just might have gotten a kid that could be PSAC Player of the Year.

“They got a really, really special player.”

What happened after the break is Carroll’s pressure began to trouble the Pioneers, leading to turnovers and making it extremely difficult to find the big fella inside. That pressure also perked up the Patriots, as an effective transition game also jacked up the energy level all over the place.

“It gave us momentum because we created a couple turnovers and got out in transition,” Hoggard said of Carroll’s second-half surge. “They had to play fast and they had to play at our pace, which helped slow down the big kid from getting the ball and doing whatever he wanted.

“He was their big gun tonight and he really was. He’s a good player and I have a lot of respect for him, but [our pressure] just helped us a lot.”

“Our guys really responded by bouncing around and creating some turnovers,” Romanczuk added. “That snowballs and when they got the ball in the half-court, it was going to be hard for us to defend [them]. Smith obviously is a handful, but for us we don’t have your typical 6-5, 6-6, 6-7, 6-8 guy that can bang with him inside. The guys we put on him did their best, but we’re a little undersized.”

Anderson had a big third quarter, collecting 10 of his 17 points, including a 3-ball from the right corner that had Romanczuk’s bunch pogoing to the bench with a 48-43 lead after three quarters.

“He made some timely, timely shots for us,” said Romanczuk, who also lauded Anderson for his want-to and desire. “He had this kind of never-say-die, I’m not going out like this senior type of game and he did that a couple of games ago against Mastery Charter North.

“He was great,” Romanczuk continued. “Keyon was great. And obviously A.J. does such a good job for us as a sophomore point guard. … He’s such a talented young guy. He’s got strength. He’s got smarts. He’s got great court vision and when he’s making his jumpers, he’s pretty much unguardable.”

Butler picked up where Anderson left off, scoring nine of his 21 points in the final quarter. Yet even though the Patriots appeared ready to blow things open when Hoggard’s 3-ball at the start of the fourth fell and Butler followed with a bucket at the tin, L-S promptly answered with an 11-0 salvo indicating the Pioneers weren’t ready to hitch up their wagons and head for home.

Yet when Isaac Beers missed a free throw with 37.3 showing and the Pioneers clinging to a 65-64 lead, Smith appeared to have the offensive rebound. Suddenly stripped by the determined Patriots, that turnover led to Hoggard’s lay-in with 30 seconds to play and a 66-65 Carroll lead.

Beers had a chance to put L-S back in front, but could only convert the front end of a two-shot look. And when Hoggard and Butler both misfired from the paint, overtime awaited.

“Never a doubt in my mind going into overtime,” Hoggard said matter-of-factly.

Now it’s on to Friday’s quarterfinals against a Milton Hershey squad that wants to really rev it up and go flying up and down the court. Just doing his due diligence earlier in the postseason, Romanczuk just happened to be in Hershey earlier this month when the Spartans won the District 3 crown.

“Little different game. They’re up and down the court,” Romanczuk said with a grin. “It’s now been 10 years of us in states and in Year 1 I had no idea what I was doing driving out to Hershey to the Giant Center for the District 3 championship. Now, as each year goes by, I feel like I’m the vet.

“I make the annual pilgrimage out there, whether we’re possibly going to meet that champion in the first round, third round, whatever. I just want to know more and more about those programs. I think it’s something that, as I’m driving out there, I’m like, ‘Why am I doing this? We might not even get to that point.’I think it pays off, because I learn more and more about teams out there and how they play.