PIAA 4A: Young dominates as Bethlehem Catholic knocks out Conwell-Egan 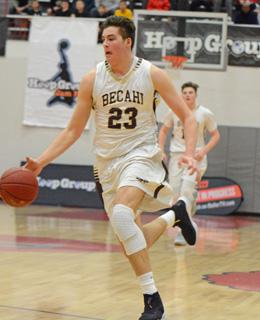 Northwestern commit Ryan Young (above) and BeCaHi are in the PIAA Class 4A quarterfinals. (Photo: Josh Verlin/CoBL)

SOUDERTON – Bethlehem Catholic senior Ryan Young is a 6-foot-10 center for the Golden Hawks and Conwell-Egan 6-5 senior Eric Esposito is the big man for the District 12 runner-up Eagles.

While the two may have arrived Tuesday night at the PIAA Class 4A Round of 16 matchup on even footing, they sure didn’t leave the Souderton Area gym the same way.

“Overall, I just think we played tough ‘D’ and we were relentless on the offensive glass,” said Young, this year’s East Penn Conference MVP who is committed to Division I Northwestern.

“This means so much to us. We have six seniors that have been here for a while and I know it means a lot to them to bring this back to Bethlehem.”

Esposito, who tallied 15 points in the contest, though only three in the first half when BeCaHi (27-3) went up 20 by the break, has made two trips to the state quarterfinals during his high school career – once in 2015 when the Eagles (9-16) won a PIAA title in Class AA and again in 2016 when C-E earned a berth in the state quarterfinals.

“On defense, they’re physical and they bang around with you and on offense, it didn’t seem like they missed a shot,” said Esposito, who is committed to Division II Holy Family. “When they did miss a shot, it seemed like the bounce went right to them.

“That hurts even more when they have the size advantage.

“A lot of stuff went their way and they just seemed like they had the upper hand tonight.”

With the win, Bethlehem Catholic will meet District 3 champion Berks Catholic, a 56-36 winner over Valley View, on Friday at a time and site to be determined.

The Eagles stuck close with the Hawks – for about six-and-a-half minutes – with a 3-pointer by Esposito drawing Egan within a pair at 12-10 with 1:28 remaining in the first period.

However, an 8-0 BeCaHi run that began with a 3-pointer by Paz continued with a thunderous dunk by Young – off the Eagles’ fifth turnover in the initial frame – and was capped off with a 3-point play by Ryan with two ticks left on the first period clock that sent the Hawks into the second period up, 20-10.

While C-E senior Joe Baldacino started the second quarter off with an uncontested trey, BeCaHi tallied the next 13 points to go on top 33-13 with 3:30 left in the first half.

Coming back from the break, the Hawks tallied the first 10 points of the third quarter and the game was – for all intents and purposes – over.

“They limited us to one shot and they contested everything. That made it difficult for us to score,” said Egan first-year head coach Bryan Caver.

“Their bigs got back, they rebounded, they ran the floor; they did exactly what bigs are supposed to do. They’re 6-8, 6-9 and they clogged the middle, made it difficult and they contested.”

In addition to swallowing up every rebound – brothers Ryan and Kyle Young split 20 boards between them – the twin towers sprung multiple teammates loose for fast-break baskets to help turn what could have been a contest into a rout.

“That’s what happens when teams get momentum,” said Caver. “Everything starts falling apart.”

“We tried to front the post a little bit, help a little weak side but size is size.”

Ryan Young hit for 14 points in the third quarter including three straight layups to finish his night. Together with a 3-pointer by Paz, it put BeCaHi up 60-28 with 3:30 still to play in the third quarter. Paz and reserve sophomore Ryan Santana finished the period with 3-point plays to put the Hawks up 70-39 entering the final frame.

“I just tried to get open and let my teammates give me the ball and then work it inside out after that,” said Ryan Young. “We got a lot of open threes, a lot of offensive rebounds; I thought it worked.”

BeCaHi shot 55 percent in the first half and over 60 percent after the intermission, canning a whopping 38 shots from the floor in the game including eight 3-pointers.

“I think we’re playing our best basketball right now; I think it happened against Nanticoke as well,” said Ryan Young. “I don’t know what the percentage was for that game but it had to be pretty good.

“I’m really proud of my team, my teammates and our coaching staff. I think we’re really peaking right now as a program.”

Last year, the Hawks lost 84-52 to William Allen in the East Penn League championship and lost 58-56 to Greater Nanticoke in a PIAA opener. This year, Ray Barbosa’s second as BC head coach, BeCaHi captured the EPC Championship with a 47-44 triumph over Allentown Central Catholic.

After topping Octorara and Wilson for their second consecutive District 11 Class 4A crown, the Hawks annihilated District 2 third-place finisher Greater Nanticoke 71-30 in a PIAA opener before taking on Conwell-Egan.

“I think we were capable of winning that game against Nanticoke,” said Ryan Young, of last year’s loss to the Trojans.

“As much as we wanted to put that game behind us, we kept it in the back of our minds as motivation.

“It’s good that we’re in this position now but I think we’re going to celebrate this win today and move on to our next opponent tomorrow.”