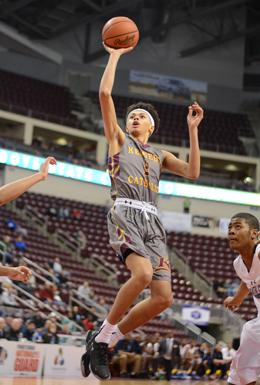 Maceo Austin (above) and Kennedy Catholic are going for their third straight PIAA Class A title. (Photo: Josh Verlin/CoBL)

The final segment of the 2017-18 Pennsylvania high school basketball season is upon us.

Six different brackets of 32 teams each get underway this weekend in the Pennsylvania Interscholastic Athletic Association (PIAA) state playoffs, the second year since the expansion from four classifications to six brought even more excitement to March in high school gyms around the Keystone state.

The CoBL staff will be going in-depth on each of the six classifications to preview the state tournament, with favorites, contenders, dark horses and players to watch.

Here’s a look at the Class A bracket (district-seed, record in parenthesis); all first-round games will take place Friday, March 9. The full bracket, with times and locations, can be found here.

The Favorites
Kennedy Catholic (10-1, 18-4)
Prohibitive favorites to claim their third straight state championship and ninth overall before moving up to the Class 6A ranks, Rick Mancino’s Golden Eagles have every ingredient needed to ensure their bid for a three-peat is successful. While returning 6-5 all-state selection Maceo Austin (18.1 ppg) played huge roles in KC’s latest two state championship runs, he hardly operates alone. Oscar Tshiebwe, a 6-10 power forward who is Kennedy’s leading scorer at just over 21 points per game, is a presence up front, as is 6-8 Mattia Acunzo (10.8). Two other 6-5 youngsters, senior Ben Taylor and sophomore Isaac Herster (8.4), also can get buckets for a Golden Eagles squad that hasn’t lost to a PIAA squad. KC also can turn to 5-11 junior Manis Norman (4.6).

Faith Christian (1-1, 25-2)
After capturing a District 1 Class A title on a last second shot in overtime by forward Sawyer Smith, Faith Christian has perhaps the best shot of anyone to stop Kennedy Catholic from winning their third straight state title. Last year, Faith Christian fell to Girard College in the state semifinals. Head Coach Tony DaCosta’s Lions are an experienced bunch, with a roster that features six seniors and seven juniors. The 6-foot-7 Smith leads a group of talented seniors that include guards Landon Coyle, and Darius Forney and forward Charles Ervin. The Bradford brothers, Derian Bradford and Owen Bradford, Josh Forker and Isaiah Robinson are the juniors for a strong Lions squad.

The Contenders
Girard College (1-2, 20-6)
Last year’s runner up’s, Girard lost this year’s District One championship on a buzzer beater courtesy of Faith Christian. But the Cavs didn’t graduate a single player from last year’s team, instead gaining one. That’s junior guard Rodney Carson, a 6-3 reclassified junior from Cheltenham. He’s the spark plug for Girard, and can make some noise with his athleticism out of the backcourt. He’ll be joined by sophomore Aquil Stewart -- a 5-foot-5 guard who can shoot it from beyond the arc. Mikeal Jones will be the go-to option, as the 6-8 sophomore can score from anywhere on the court, but is best in the paint. Look for 5-9 junior Kasim Toliver, 6-6 junior Brandon Smith, and 6-5 senior Daiquan Copeland to also make an impact as Girard hopes to win the second state championship in school history.

The Dark Horses
Sankofa Freedom (12-1, 17-7)
Fresh off their second straight District 12 A championship, Sankofa will look to get further than their second round PIAA Class A playoff exit against Faith Christian a season ago. The team is built around their junior class with 6-foot-6 point guard Khalil Turner’s ability to facilitate the offense and guard multiple positions leading the way for the Warriors. Additionally, Scott Spann has the ability to pour in points in a hurry, leading the team in scoring for the last two seasons.

Vincentian Academy (7-1, 18-7)
Perennially potent Royals may have been 5-5 in early January — following a loss to Class 6A hammer Allderdice — but first-year skipper Tim Tyree piloted his bunch to a WPIAL Section 1 title and eventually the school’s third WPIAL championship. Zach McDonough, a 6-2 senior who averages 21 points per outing, banked 25 in the WPIAL final as Vincentian edged Section 1 rival Union Area 54-51. Nice mix of seniors — 6-2 Kyler Fedko and 5-11 Zach Collins are the other upperclassmen who usually start — while 6-6 freshman Angelo Reeves and his 6-0 classmate Alex Griggs also have been extremely productive for the Royals.

The Stars
Mikeal Jones, Girard College
Only a sophomore, Jones already as two years of state tournament experience under his belt. His first freshman year, spent at Roman Catholic, Jones won the AAAA state championship as a Cahillite. Then last year, he transferred to Girard and reclassified to the class of 2020 and repeated his freshman year. In his first year at Girard, the talented 6-8 forward lost in the state championship game. Jones can go for 20 plus points a game, and it’s very hard to stop him once he gets going.

Maceo Austin, Kennedy Catholic
Austin has taken home two state championships in his first two years of high school; and he’s played a big part of both of them. An athletic 6-5 wing, Austin can score at all three levels of the floor. Only a junior, he’s already got offers from the likes of Virginia, Pittsburgh, West Virginia, and Penn State.

Oscar Tshiebwe, Kennedy Catholic
Austin is hardly the lone talent on Kennedy’s remarkably talented ballclub, as the 6-10, 230-pound Tshiebwe provides an intimidating presence up front. A native of the Democratic Republic of Congo, Tshiebwe transferred to Kennedy prior to the school year from Mountain Mission School in Grundy, Va. Averaging a team-best 22 ppg, Tshiebwe has offers from power-conference schools such as West Virginia, Clemson, Georgetown, Oklahoma State, Penn State, Pittsburgh, Rutgers, Virginia and Virginia Tech.

Thomas Schultz, Lourdes Regional
Clearly the Red Raiders’ catalyst, Schultz shucked the walking boot he was sporting when the District 4 playoffs began and cranked out a double-double (12 points/10 rebounds) in a 39-27 win over Millville in the Class A final. The district title was the first for the Shamokin-area school in 17 seasons. At 6-5, the talented junior can play up front, on the wings and in the backcourt for a Lourdes squad (22-4) that collared 14 straight victories at one point. A three-sport standout, Schultz has verbally committed to play baseball at Vanderbilt.

Jalen Gorham, York Country Day
Taller and longer than he was last season while helping the Greyhounds advance to the state quarterfinals as a sophomore and landing an all-state nod — he was approaching a triple-double before fouling out as YCD fell in OT to Girard College —  the 6-7 Gorham is averaging right around 20 points per game for the three-time District 3 champs. Capable of playing in the paint or at the head of YCD’s trapping 1-3-1 zone, Gorham erupted for 26 points as the ‘Hounds erased a 19-point deficit and defeated Lancaster Country Day in the D-3 final. Hearing from Robert Morris and a host of Patriot League programs.

Brady Fyfe, Shade
Returning all-state selection has maintained his productivity throughout his junior campaign, as the 6-3 guard is averaging 19 points and eight boards per outing for the District 5 champions. Has scored in double figures in 23 of 25 outings — Fyfe pocketed 19 in the D-5 title game — and racked up eight double-doubles for the Panthers (22-3).

Sawyer Smith, Faith Christian
The hero in Faith Christian’s quest to win their first ever District title, Smith is your classic blue-collar post type of player. A legitimate threat to get a double-double every game, Smith scored all of the Lions eight points in overtime including the last second shot to propel them to victory in their 48-46 District 1 Class A title game against Girard College last Saturday.

Tre Charles, Union Area
Stands just 5-11, but this talented senior plays a mighty big role for the WPIAL runners-up, whether he’s facilitating and/or finishing. Charles checked into the WPIAL title game against Section 1 rival Vincentian averaging 23-plus points per game for the Scotties (17-6). Had some foul issues in the final, but still wound up sharing team-high honors with 14 points.

First-Round Games to Watch
Sankofa Freedom (17-7) vs. Girard College (20-6)
Whoever wins this matchup of Philadelphia schools has a chance to go quite far in this bracket, as both Girard and Sankofa have the depth, athleticism and talent to compete for titles at several classifications. Girard is the team that’s been here before, with Jones, Stewart, Daiquan Copeland and Brandon Smith all returning from last year’s state runner-up, but they could find themselves done after one round if Sankofa plays up to snuff. The Warriors are certainly fierce, led by a strong junior class that includes Turner, Spann, guard Kobe DeVine and more. Expect an up-and-down contest that could see the winner needing more than 80 to win, and it might not be until the semifinals where the winner gets threatened again.