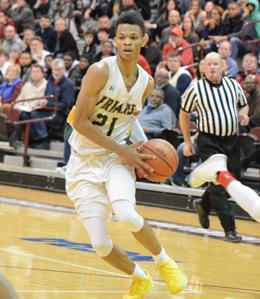 Isaiah Wong (above) and Bonner-Prendergast won its first-ever District 12 title, and will play New Oxford in the state tournament. (Photo: Josh Verlin/CoBL)

PHILA. – This is Bonner-Prendie head coach Jack Concannon’s second time around as head coach of the Friars. Big Jack was the team’s coach from 1991 to 1996 before coming back to Lansdowne Ave. four years ago.

The first time, Bonner stood alone in Drexel Hill as Monsigner Bonner. A 1983 Bonner alum, Concannon’s Friars teams in the 90s made the Catholic League South semifinals three times, falling by two twice, once in overtime to Roman Catholic in 1992.

On Monday at the Palestra, with a chance to capture its first Philadelphia Catholic League (PCL) title since 1988, Bonner fell, again by two and again to Roman on a last-second layup by the Cahillites.

All that heartache was wiped away in a thrilling 64-59 comeback win in overtime over Philadelphia Public League runner-up Martin Luther King (MLK) in the District 12 Class 5A Championship Saturday afternoon at Ben Franklin High School.

“This a great accomplishment for the program,” stated Concannon, a Bonner grad who helped the Friars win the PCL title in 1983 in a win over Father Judge. “It helps us go in the direction we want to go and we just want to keep playing.

“These kids aren’t done playing yet; they want to keep it going.

“Hopefully, we can start next Friday night and get a nice run going in states.”

In the closing moments of regulation, it sure didn’t look like Bonner would come out on top in this one. With a little more than a minute left in the fourth quarter, the Friars trailed 48-40 and were behind five points when their scoring leader Isaiah Wong canned his only 3-pointer in the contest to make this a 2-point game with 31 ticks left in regulation.

Still, the Cougars had the lead and possession, so all MLK had to do was hold on. King could not, however, and lost control of the ball twice in the final half-minute, nearly dropping the game in regulation after junior Denelle Holly dribbled the ball out of bounds with 16 seconds remaining.

On one of those turnovers, MLK senior Jerry Andrews (9 points) found himself prone on the floor underneath the Friars’ basket going for a loose ball along with Bonner reserve sophomore Mahir Sharif (5 points). Andrews was called for a traveling violation and Wong drew a foul on the Friars’ next possession.

Wong made both of his foul shots, sending the title tilt to an extra session tied at 48.

Bonner took control of the game in overtime, notching a 6-0 run on a pair of field goals by Wong and another by Sharif. The Friars extended their scoring spurt to 10-2 to go ahead 58-50 with 1:30 left in the extra period and closed the game out by shooting 10-of-12 from the foul line.

In addition to Wong, Bonner leaned heavily on the play of forward Tariq Ingraham, who hit for all 16 of his points after the halftime bell.

“We knew we had to keep the energy level up,” said Ingraham. “We knew if we did that, we’d win the game.”

The 6-9 junior made a pair of key shots from the floor in the fourth quarter and shot 6-for-7 from the foul line (10-for-11, overall) in the third and fourth periods, combined.

“We got the ball inside to those guys early in the game and they weren’t able to finish,” added Concannon. “In the fourth quarter, Tariq finished a couple buckets in the paint and made foul shots when we needed them.

“That’s our strength; we pound it inside. People know we do it and we’re not going to stop.”

Both teams got off to a slow start in this one with both combining on a 5-for-24 shooting effort from the floor in the first period. The Friars shot an abysmal 2-for-11 in the initial frame.

“We came out and we weren’t ready and our shots weren’t flowing,” admitted Ingraham. “They got some good shots off in the beginning of the game.

“Late in the fourth quarter, we started to pick it up, started making some shots, got some and-ones, made our free throws and that set us up in the overtime.”

Wong, who is getting looks from Villanova, Xavier, Seton Hall and Miami, showed why he was named the Catholic League MVP, leading Bonner with a game-high 31 points, his second-highest points total for the season. He picked his team up in the second period, hitting four shots from the floor including a pair as part of a 7-2 run that put the Friars up 14-9 midway through the second period.

Trailing 21-16 at the half, King stormed back with seven field goals in the third period including 3-pointers by senior Ken Wilson (6 points), senior Denelle Holly (15) and junior Ricardo Montereiro (7).

Wilson’s trey with 2:13 left in the third period gave the Cougars their first lead in the contest since the first period and Andrews hit a 1-handed putback basket off the glass to put MLK up 33-30 heading into the fourth quarter.

After turning the ball over 17 times in the Catholic League championship, Bonner limited turnovers to just 10 in five periods of play in this one.

“We all just learned from that experience,” added Wong. “That was just a terrible loss in the (Catholic League) championship and today, we were just trying to get some momentum back.”

The Friars certainly seem to be rolling downhill, now.

After the game, MLK senior Will McNair Jr. (11 points) could only lament over what might have been. The Cougars are also headed to states and for the sixth year in a row as the D12 runner-up.

“It’s about discipline. We weren’t disciplined enough at the end of the game,” said McNair. “I missed the dunk, we missed layups, free throws.

“And it all started from my missed dunk. If I would have made the dunk, we would have won the game.”

McNair’s big miss came with his team up 48-40 with 55 seconds left in regulation. Of course, a 5-for-11 shooting performance from the foul line in the fourth quarter didn’t help King’s cause.

More than that, Bonner went on an 18-2 scoring run over the course of the next three and a half minutes.

The Friars begin states Friday, March 9 against the District 3 ninth-place finisher New Oxford while the Cougars open PIAA play against Chester, which lost 54-51 to Wissahickon in a battle for third place in District 1.