District 1 5A: Penncrest shuts down Shanahan for district repeat 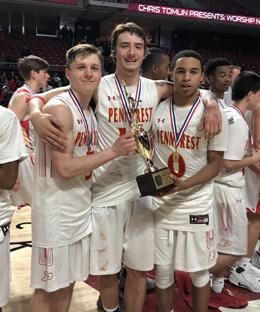 As Penncrest’s boys basketball team sprinted over to the baseline to celebrate their second consecutive District 1 5A championship following a dominant win over Bishop Shanahan on Saturday afternoon, only one Lions player stayed back from the fray.

Star senior Tyler Norwood, the program’s all-time leading scorer, had just put on another masterclass performance, nearly outscoring Shanahan by himself as his teammates locked the Eagles down defensively en route to a 50-28 victory.

But before he could celebrate with his teammates, coaches and fellow students, the 5-foot-10 guard went right over to the scoreboard, forming a one-man handshake line with his foe, his teammates quickly following behind.

“[It was] respect,” Norwood said. “That’s a great team, they won a lot of games...I just wanted to show my respect to their team and their coaches.”

Once handshakes were over and done with, Norwood raced over to the sizeable Penncrest student section in attendance at Temple University’s Liacouras Center, finally getting a chance to celebrate with his peers. But there was something else he did as well, something not visible to anybody else in attendance at Liacouras but certainly felt by the Lions’ all-time leading scorer.

“It was a sigh of relief, to take that target off our back and just throw it on the ground,” Norwood said. “All year we had that target -- we knew it, but we didn’t let that fluster us.”

To win its first district title in 37 years, over Upper Merion in last year’s inaugural 5A tournament, Norwood had to play hero, hitting four deep 3-pointers to help Penncrest overcome a double-digit second-half deficit for a 39-37 victory.

There was no need for any such late heroics on Saturday.

Norwood was unguardable, hitting his first two shots from the floor and finishing 11-for-19 from the floor, chipping in two rebounds and two assists as well.

Penncrest, as it has been all season long, was stellar on the defensive end, holding Shanahan to 14 points apiece in both the first and second halves.

The Eagles (22-5) were just 8-for-40 (20 percent) from the floor and 1-of-17 (6 percent) from 3-point range, struggling to get open looks against a Lions’ unit that hadn’t let an opponent score more than 40 points -- or trailed for even a second -- through its first three district playoff games.

“We just didn't play well today,” Shanahan coach Ken Doyle said. “Give them a lot of credit, they work hard. It was tough.”

While Norwood scored 27 points, one more than his championship total from a year ago, it was his teammates who absolutely shut down Shanahan. 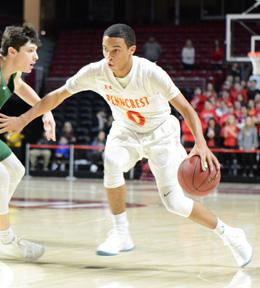 Tyler Norwood (above) had 27 points, one more than his total a year ago. (Photo: Josh Verlin/CoBL)

Forwards Chris Mills, Matt Arbogast and Malcolm Williams -- Mills a senior, the other two juniors -- and guard Justin Heidig did what they’ve been doing all year long, except this time on the biggest stage yet.

They limited Shanahan star big man Kevin Dodds to just 12 points, though he did grab 13 rebounds, including nine one the offensive end. But the 6-6 Dodds was the only Shanahan player who was able to get much going on offense; Tom Ford added eight points and eight rebounds, and the rest of the Eagles made a single field goal.

“For a high school team to be able to come up with a defensive scheme against a high-caliber offense like that says so much to these kids’ attention to detail and how much they want to win,” Mike Doyle said. “I mean, the defensive slides were almost perfect...we had to double from different angles from the baseline side, because when (Dodds) skipped he had the shooters on the other side, and we had to take the shooters out of skip passes. And they did it.”

After leading 12-4 following the open frame, Penncrest saw Shanahan come back to tie it up at 14 midway through the second, the only real push the Eagles made all game. Norwood scored the final six points of the second quarter and the first six of the third to re-open a double-digit advantage, and the rout was on.

Even the Penncrest bench was locked in -- reserve forward Gio Antonelli played key minutes when Mills had some foul issues, scoring four points and grabbing three rebounds, including a layup off a feed from Norwood to end the third quarter with the Lions up 32-18. And backup guard Isaiah Rice grabbed four boards off the bench.

Norwood finally departed with 30 seconds left, sharing a big hug on the sidelines with Doyle and his classmates, Mills and Heidig, the four of them jumping up and down, arm-in-arm.

“[It] feels amazing,” said Mills, besides Norwood the team’s only returning starter from a year ago, who scored five points and grabbed four rebounds. “All the hard work, long days, preparation, the days getting yelled at by Doyle, this is what we worked for all season and we finally got it. So surreal.”

“We’ve been working so hard together, us three seniors,” added Heidig, who scored seven points and grabbed eight rebounds after sitting on the sidelines the entire game a year ago. “We know we have to be leaders for this team. We trust each other, and it was a great feeling to get back here and go back-to-back.”

Both teams will still advance to the state playoffs.

Penncrest, which lost to Hershey in the first round a year ago, draws the 10th seed out of District 3, Shippensburg (16-8). Shanahan, which lost to Martin Luther King at the same spot, gets District 3’s fifth seed, which happens to be Hershey (22-5).

Though the Lions’ target all year long was on the district title -- winning the state tournament would likely involve going through a Catholic League team or two as well as a few other powerhouses -- they’re still nowhere near ready to call this season a wrap.

Penncrest has never won a game at the state tournament level before. And this group is used to making history.