District 1 5A: Sun Valley beats Rustin, gets back to states 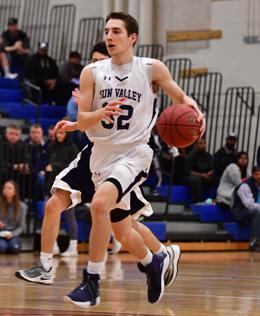 Vinny DeAngelo (above) scored his 1,000th career point as Sun Valley made it to states for the first time in 28 years. (Photo: Mark Jordan/CoBL)

As Vinny DeAngelo stood outside the Sun Valley locker room following Wednesday night’s 47-41 win over West Chester Rustin that clinched the Vanguards a spot in the PIAA State tournament, his bright smile juxtaposed the faded red stains of blood on his undershirt.

It was in the second quarter when an elbow to the face took DeAngelo out for more than two minutes of the District 1 5A playback game at Sun Valley. After his bloody nose was treated and his jersey was switched out for a clean teammate’s, the junior guard came back in and finished one of the most historic nights in the history of Sun Valley basketball.

DeAngelo led his team with 20 points and surpassed his own career total of 1,000 points, all in an effort to clinch Sun Valley’s first state playoff berth since 1990.

“When I came out of the game, I was thinking, ‘I can’t take this for granted, I have to leave everything out on the court,’” DeAngelo said. “Just being out that little bit of time made me want it more. And it’s awesome. It’s what me and my teammates worked for in the summer.”

The win means Sun Valley (18-7, 8-5) will move on to the PIAA state playoff bracket while West Chester Rustin (17-8, 7-6) will play Great Valley in another playback where only the winner will move on to states. Sun Valley had fallen to Rustin, a Ches-Mont American rival, twice this season already.

“This week in practice, we could tell these kids were practicing with a purpose,” head coach Steve Maloney said. “It’s not fun to lose to a team three times in one year, and I think we kind of played with a chip on our shoulder.”

DeAngelo dominated from start to finish. He took plenty of shots, going 6-of-16 from the field, and found ways to get to free throws, going 8-of-9 from the foul line.

He also reached the milestone of 1,000 career points, a feat he accomplished with an important and-one basket midway through the fourth quarter in between two Rustin scores. The game only briefly paused for a standing ovation from the Sun Valley fans but DeAngelo was honored with a commemorative basketball at the end of the game.

He joins his sister Gia DeAngelo, who graduated from Sun Valley in 2013, in the school’s 1,000 point club.

“It’s pretty cool,” DeAngelo said of the milestone, for which he was awarded a basketball with the words “Sun Valley 1000 Point Club” painted on it. “[Gia] said ‘welcome to the club’ after. But, I don’t know, all I really cared about was getting the win.”

The personal 7-0 run allowed Sun Valley to take a 23-19 lead into the half. And DeAngelo picked up right where he left off in the third, coming out with a drive and getting a foul with a tough bucket.

“My mindset was just to attack the basket and try to get their bigs in foul trouble,” DeAngelo said. “I’m always going to try to control the tempo, slow things down, just keep attacking the basket, I think that’s what I do best.”

While DeAngelo took plenty of open looks, he also used his control of the floor to give his teammates chances. The most important being the pass he made to Lance Stone when the Vanguards trailed by one with just more than a minute left.

Stone got the pass from DeAngelo, who had the defense caved in, and got fouled as he made the tough layup. Stone then made the free throw and Sun Valley never relinquished its new lead.

Stone gets the bucket and the foul. FT is good. 43-41 Sun Valley with a minute left. pic.twitter.com/FClx7UbEag

“That takes a special person because with a lot of high school teams, you get a guy scoring that many points, he keeps putting it up,” Maloney said. “But he’s not afraid to share the ball. He’s been unreal and he’s a better guy than he is a basketball player which makes him easier to coach.”

Behind DeAngelo was junior guard Isaiah Kennon who finished with nine points. The transfer from Archbishop Carroll didn’t score his first point until he made a three throw at the end of the of the third quarter, missing his first five attempts from the field.

But that didn’t deter him. Kennon hit a crucial, go-ahead 3-point shot late in the fourth quarter and added five more points in important free throws that locked down the victory.

“Coach told me to keep shooting, don’t stop, keep going, just keep shooting the ball and have confidence when you shoot,” Kennon said. “And everyone on here is part of a team and we knew we would come together at the end and win this game.” 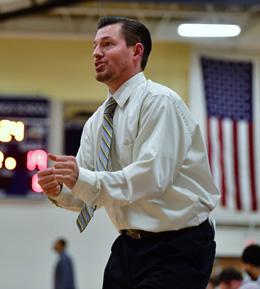 Kennon’s most important role was on the defensive side as he was tasked with guarding senior guard Bryce Barrouk, Rustin’s top all-around shooter. It was a move that Maloney made after learning from their second loss to Rustin this season, a 62-59 defeat on Jan. 23.

It paid off. Barrouk struggled to get open looks, shooting just 1-of-6 from the field, a 3-point shot in third quarter being his lone score.

“[Barrouk] is open when he gets off the bus, so we knew you can’t give him space,” Maloney said. “You give a good shooter like that space, it changes the game, that was really a point of emphasis tonight. And he didn’t cover him in the first two games, so I thought we played well.”

Rustin was held in the game by the play of junior guard Tajir Asparagus, who finished the night with 15 points, 10 rebounds and three forced turnovers. In the early stages of the fourth quarter, Asparagus made two baskets with a foul on back-to-back possessions.

Junior wing player Andrew Hickson contributed with an efficient shooting day for the Knights, going 3-of-5 from the field, including two 3-point shots, and adding two free throws. Junior forward Jake Nelson controlled much of the paint, adding nine points of his own and grabbing seven rebounds.

But the night belonged to the Vanguards who will play Holy Ghost at home in the next round of Districts before marching on to the state tournament. It culminated what has been quite a turnaround from a 6-16 record last season, but one that was anticipated by Maloney and his players.

“We knew we could make it this far but I don’t think anyone outside of these hallways knew,” the ‘02 Sun Valley grad said. “Because we played all sophomores last year. So we knew with experience we would be better but the kids really bought in. In the offseason, they were in the gym before me. They were ready to go before I got there. So the kids deserve most of the credit, they put in the work and they’re getting the results of it.”