District 1 6A: Plymouth-Whitemarsh crashes glass to down CB West in semis 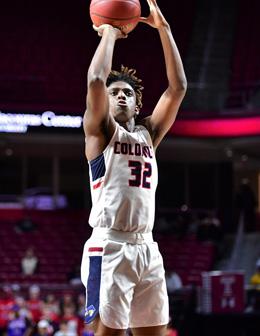 Alan Glover (above) and P-W hit the offensive glass hard to power the way to a win over CB West. (Photo: Mark Jordan/CoBL)

The definition of a “bad shot” is quite different for Plymouth-Whitemarsh than it is for most other high school basketball teams, especially those in District 1.

Other coaches might complain about their team taking shots too quickly in a possession, or jumpers with a hand in their face, or slightly-out-of-control layups.

But not Jim Donofrio. He’s fine with pretty much anything his Colonials throw at the rim -- because he knows he’s got a team full of players who collect missed shots better than anybody else around. It’s a mentality that starts at the top and trickles all the way down.

“I don’t think there’s ever a bad shot,” senior forward Alan Glover said. “It’s just another opportunity to get an offensive rebound.”

And in a District 1 6A semifinal against Central Bucks West, Plymouth-Whitemarsh put that attitude to work.

The Colonials starters gobbled up 15 offensive rebounds, a major reason they were able to handle the Bucks 68-46 to advance to Saturday’s district championship game against Suburban One League rival Abington.

Naheem McLeod, P-W’s 7-foot-1 junior center, was certainly a help in that area, grabbing three of his teammates’ misses amongst his six rebounds in total to go along with his game-high 21 points. But Glover had six offensive rebounds amongst his 10 boards; fellow senior Ahmin Williams had four of his seven on the offensive boards, while Ish Horn and Ahmad Williams made sure each starter had at least one.

Ahmad Williams finished with 16 points; Glover and Horn had 10 apiece.

It was a major improvement from the last time the two teams met, in the Suburban One League semifinals just two weeks ago; Plymouth-Whitemarsh (27-0) won that one as well, by 21, but it was a highly-competitive first half, which saw the Colonials up only seven on the Bucks.

“If you watched the film of...the first West game, we literally stood and watched a shot go up and they accepted getting boxed out,” Donofrio said. “The West kids, you’ve got to be physically strong, you’ve got to hold your ground, you get 50/50 balls, they’re just rip it out of yours hands.

“Sometimes it’s the old Bobby Clarke [line] from the Flyers, we dump the puck and arrive with ill will. It’s a great line, and you have to have some of that. And if you buy into that mentality, then you’re going to be able to compete with anybody.”

Whether or not Clarke actually said such a thing -- a relatively brief Google search revealed the closest match as former Flyers coach Fred Shero reportedly encouraging his players to “take the shortest route to the puck carrier and arrive in ill humor” -- there was no such start to this one. With McLeod picking up two put-back buckets on P-W’s first two possessions, the Colonials jumped out to a 19-5 lead after one quarter, an advantage that briefly got to 24-5 before C.B. West found its rhythm enough to close it to 29-17 at halftime.

The margin was largely the same after three (45-30), but an early fourth-quarter spurt helped the top seed in the 24-team playoff roll right into the championship game.

Central Bucks West (21-6), which will play Lower Merion in a game to determine seeding for the state playoffs, got 10 points from senior Jake Reichwein and eight from senior Collin MacAdams, the 6-5 California (Pa.) commit who was out with an injury in the teams’ last meeting.

The only undefeated team left in the region, Plymouth-Whitemarsh has at most six games remaining this season, if it wants to accomplish its goals of winning both district and state titles a year after falling short in both; the Colonials lost in the district semifinals to Abington, and in the state quarterfinals to Reading, both eventual champions.

“We want banners and trophies and rings, that’s what we really want.”