The District 1 6A semifinals are taking place Tuesday night at Temple’s Liacouras Center, the final four teams left in the area’s largest high school classification in search of a district title. All four have qualified for states, so that pressure is gone; it’s all about reaching Saturday evening’s championships game, 6 PM also at Liacouras. 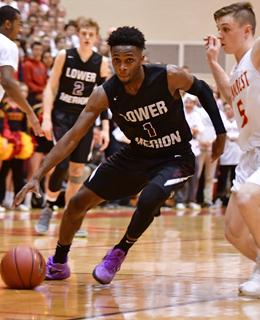 Steve Payne (above) and Lower Merion will have to contend with Abington's 6-7 Eric Dixon on Tuesday night. (Photo: Josh Verlin/CoBL)

2) Abington vs. 3) Lower Merion (6:00 PM)
This game will feature a height advantage -- this time it’s Abington who has a bigger presence in the paint. Junior forward Eric Dixon has been frustrating opponents all year with his soft touch and footwork well beyond his years in the post. At 6-foot-7 and about 250 pounds, Dixon can catch the ball on the outside and score at the basket, or catch it in the post and score. Even though he’s still got another year until he graduates, Dixon is being pursued by high-major programs such as Villanova and Virginia, among others.

His classmate, 6-5 junior Lucas Monroe, is only a couple inches shorter than Dixon, but you’ll find him in the backcourt more often than not. A lefty with an improving outside shot, Monroe is a balanced scorer with can elevate to finish above the rim. Although he’s best outside the paint, you won’t find him running the team as the point guard. That belongs to 6-2 senior guard and four-year starter Robbie Heath. A native of Australia, Heath is a confident ball-handler who can make the open shot from the outside.

Twins Brandon and Bryan Coffman will provide a spark, and Darious Brown will also make an impact for the Ghosts. As the plan has been all year, the Ghosts will look to get the ball to Dixon in the post, but certainly have the weapons in the backcourt to even out the scoring.

Lower Merion also has most of its talent in its junior class, with eight players on the roster, with four making big time impacts in the starting lineup. Only one of them -- 6-5 forward Josh Martin, who recorded a double-double in the second round -- is a traditional big man.

The other three juniors, plus senior Harrison Klevan, are all guards. But, they’re some of the most talented 2019’s in the area.

Steve Payne, who hit the game-winning shot in the Central League championship, is a quick 6-2 guard with a fast first step and can also make the three-pointer. But, the best shooter in the lineup is 6-5 guard Jack Forrest. Forrest is being pursued by Ivy and Patriot League programs, and rightfully so. He can light it up from beyond the arc, and put in on the ground and get to the rim with his long frame.

Maybe the most important player in the lineup is junior Darryl Taylor, the teams go-to defender. In the quarterfinal round, Taylor shutdown Pennridge’s star junior Sean Yoder as the Aces advanced to Temple.

This game shapes out to be more competitive than the first one. While both teams have talented backcourts, it’s going to come down to who wins the game in paint. 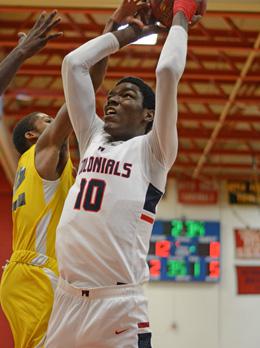 Naheem McLeod (above) and P-W have still yet to lose this season. (Photo: Josh Verlin/CoBL)

1) Plymouth Whitemarsh vs. 4) Central Bucks West (7:30 PM)
Unlike any other team in the area, Plymouth Whitemarsh still has yet to lose a game this year. A record of 26-0 have the Colonials ranked as the 23rd-best high school team in the country, according to USA Today. There have been a few close games for PW, but most were blowouts. The Colonials only beat Wissahickon by one back in December, Bonner-Prendergast by four in double overtime, the Haverford School by seven, and Neumann-Goretti by nine. But other than that, most games have been won by margins of 20 points, if not more.

A big part of PW and head coach Jim Donofrio’s success is the biggest player in the Philly area; 7-foot-1 junior big man Naheem McLeod. Not many players in the area if any can reach as high as McLeod when he has the ball, plus he’s a violent finisher around the rim. PW has had success this year in dumping the ball down low and letting McLeod do the rest. Alan Glover, a 6-4 forward, rounds out the front court for the Colonials. Glover is an athletic big man with a high-motor and ability to finish well around the rim.

If you’re going to be nationally ranked, you need to have a complete lineup; and that’s just what PW has. The backcourt trio of Ish Horn and twins Ahmin and Ahmad Williams plays just as big a part of the team’s success as McLeod. Horn, a 6-1 uber-athletic guard, has the ability to change the tempo of a game very quickly, just as he did in PW’s win over Upper Darby last week. Horn scored seven points in a row, and aggressively swatted a defenders shot off of the backboard in transition. The Williams’ twins play pretty much identical games; smart, savvy guards who will play hard on both ends of the floor and can hit the open shot. PW beat C.B. West in the only matchup between the two teams this year; in a convincing 62-41 win in the Suburban One League semifinals.

C.B. West certainly doesn’t have the star power that PW boasts, but the Bucks do have their own standout in D-II California (Pa.) bound senior Collin MacAdams. A strong 6-4 guard, MacAdams has been the centerpiece of the Bucks success this year. He’s been battling mono in the last few weeks, but proved he was back to full health after scoring 20 points and grabbing eight rebounds in a quarterfinal win over Coatesville last week. At 6-4, he can bring up the ball and go down low and score in the paint.

The obvious advantage PW will have over the Bucks is the height inside with McLeod. While CB West can’t match the height, they may be able to match the physicality. Jake Reichwein, a 6-foot-4, 225 pound bruising big man who’s heading to Holy Cross next year to play football, has caused big men taller than him problems down low all season.

Besides Reichwein and MacAdams, 6-3 sophomore Jack Neri, who has stepped up in the absence of MacAdams, will also bang down low and contend for some rebounds. In the backcourt, CB West boasts senior guard Shane McCusker, a 6-3 capable of scoring in double figures on a nightly basis. Look for talented 6-1 sophomore Mika Munari, who’s steadily improved over the year and has made an impact with his three-point shooting abilities.

Even if you make your open shots against PW, with the size and strength advantage on the interior, the Colonials have proven all year it’s going to take a lot to hand them their first loss.