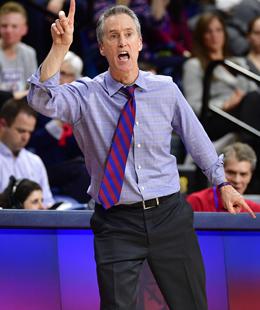 Steve Donahue (above) and Penn are one win away from securing the top seed in the Ivy League postseason tournament. (Photo: Mark Jodan/CoBL)

Caleb Wood had just enough time to process the biggest shot of his career.

The Penn senior settled into the right corner and caught his classmate Darnell Foreman’s kick-out pass, paused for just a split second, and just let the ball fly.

The ensuing swish set off the loudest roar the Palestra has heard in a decade.

“I didn’t think about it at all. I just let it go,” Wood said. “I had a little bit of time to set my feet and I definitely got a great shot off. My teammate gave me a great pass and I just knocked it down.”

Wood’s three was the dagger in Penn’s 74-71 win over Harvard on Saturday night, putting the Quakers up five with under 30 seconds to go and with momentum on their side.

For the former junior-college player who took a year-and-change of his two seasons in West Philadelphia to find his role in the Penn rotation, it was quite the way to cap off senior night.

“That was awesome,” Penn head coach Steve Donahue said. “When it’s senior night, I look at Darnell and he makes that pass and the place is erupting, I get chills, I really do. It’s what you coach for, the kids to have those memories. That’s the fun part of it.”

Wood, a Reno, Nev. native, played two seasons at Lassen Community College before coming to play at Penn last season. In his first season, he averaged 5.9 ppg but played in just two of the Quakers’ final ten games.

Now, as a senior with a 4.0 GPA, the 6-4 sharpshooter has really found his niche.

“[His career] didn’t necessarily start out how he planned,” Donahue said, “but he proved that he was mentally and physically tough enough to help us win games."

What a transformation it’s been for Wood and Penn over the last year.

The Quakers were fighting for their lives last February, trying to sneak into the inaugural Ivy League tournament after starting conference play 0-6. This season, Penn (21-7, 11-1 Ivy) is already guaranteed a top-two seed in the Ivy playoffs and has put itself in prime position to lock up the regular season title with the win over Harvard (15-12, 10-2), assuming it can take care of Yale or Brown next weekend. 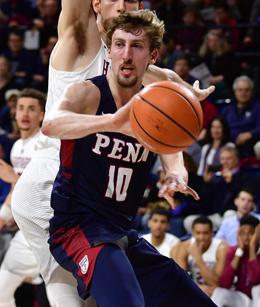 Caleb Wood (above) hit the dagger 3-pointer in the final few minutes as Penn won its biggest game in a decade. (Photo: Mark Jordan/CoBL)

Wood has played in all of Penn’s games this season, and as the team’s sixth man, he’s averaging 18.4 mpg and 9.4 ppg. In a Dec. 4 win over Howard, he knocked down six threes en route to a career-high 26 points, and against Brown on Feb. 2, he went for a team-high 22 points to snatch a victory in OT.

“This whole season, compared to last season, has been amazing,” Wood said. “My confidence has gone way up, it felt really good to come back from last year and play a lot better this year and be a big part of this team.”

Two years ago, Saturday night’s scenario would have meant even more for the Quakers, as the regular-season Ivy League champion used to take the conference’s NCAA Tournament bid. But, with Ivy Madness in place for the second season, Penn will still need to win two more games at the Palestra to make it to the Big Dance, regardless of how its final two regular season games play out.

With 20 lead changes and 10 ties, Harvard and Penn were inseparable for 35 minutes, going back-and-forth over and over again.

The Quakers trailed 58-57 with six minutes to go when they were able to pull away just enough from the Crimson. A.J. Brodeur scored four straight points and Darnell Foreman knocked down two free throws, putting Penn up five with under five minutes to play.

After Seth Towns closed the deficit back to three for Harvard, Brodeur beat the shot clock with a hook shot to make it 65-60 with 2:50 remaining; hitting another hook shot on Penn’s next possession, the 6-8 sophomore gave Penn its largest lead of the game, 67-60, with just 2:13 to play.

Harvard wasn’t done, hitting three triples to close the gap to 73-71 with 3.1 seconds left, but after Ryan Betley split a pair at the line, a three-quarter-court heave from Towns at the buzzer didn’t fall.

“I thought it was a great college basketball game,” Donahue said. “That was a heavyweight fight going back and forth and they could easily have won, I thought they played well enough to win. Just fortunate we [won] it.”

The Quakers were 26-of-51 (51 percent) from the field, turning the ball over just eight times against an active Harvard defense, and were able to win despite going 7-for-26 (27 percent) from 3-point range.

Brodeur led Penn with 17 points, 12 rebounds, and four assists, while Betley added 16 points after starting 4-for-4 from deep. Foreman finished with 14 points and five assists and Wood scored 10 to represent Penn’s seniors, but they’ll be back at the Palestra after senior night for the Ivy tournament in just two weeks’ time.

For the Crimson, Towns recorded a game-high 22 points to go along with eight rebounds.

There’s a good chance Harvard and Penn will see each other again in the conference championship game on March 11, but before thinking about that, the Quakers want to close out the regular season strongly.

“The 14-game, round-robin Ivy League championship is what I’m focusing on,” Donahue said. “I’ve been in this league, it’s my 23rd year. It’s like no other league in the country, still. Pure round-robin, fair back-to-back, you’ve got to go through injuries and compete every night, and to me, that’s the sign of a true champion. That’s our goal.

The final Ivy weekend will see Penn visiting Yale and Brown, both of whom are fighting for the final two spots in the tournament. If there’s anything Penn learned from last season, it’s that its opponents will be hungry as ever for wins at this point in the campaign, and then in the Ivy semifinals and final.

“We’re at the top of the league as far as record, so teams are going to be hungry like we were last year,” Foreman said. “We’ve got to work really hard, we’ve got to stay focused, we can’t get lax, because that tournament is grueling. Guys are going to give you their best shot at the end.”

When Penn does return to the Palestra for postseason play, it will be comforting to know that the Quakers haven’t lost an Ivy League game at home all year. Attendance has gradually risen as the team has won more games, and 6,586 were in the crowd on Saturday night. You can bet that come the Ivy tournament, all 8,722 seats will be filled.

“This is a tremendous environment and always has been,” Harvard head coach Tommy Amaker said. “I’ve always been in favor of our tournament being right here. It’s always an honor to come in here and compete.”

“There’s very few places like this on a Saturday night in February,” Donahue added. “Especially when the Palestra’s full, I take a second and just look around, just an incredible atmosphere, the corners are filled and it’s hot, teams are playing great, the place is loud. It’s just fun to be a part of.”

More than any time in the last decade, there’s reason to get excited to see the Quakers play at the Palestra.

Penn basketball is officially back.