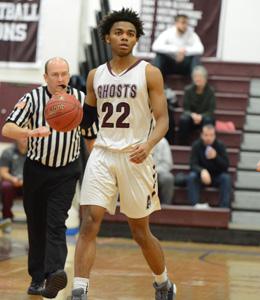 Lucas Monroe (above) and Abington started slow but finished strong to advance to the District 1 6A semifinals. (Photo: Josh Verlin/CoBL)

The energy of a quarterfinal matchup between two rival schools was apparent all throughout Abington’s gym during the Ghosts’ matchup with Norristown on Friday. Both schools were well represented, with Abington’s student section -- unbothered by the sweltering heat of the packed gym -- being especially raucous, and the Norristown delegation making sure that their voices were heard as well.

While the first quarter saw Abington jump to an early eight-point lead, they didn’t quite come out with the energy expected in a major postseason battle, allowing Norristown to come back to within two points midway through the second.

The Ghost’s were caught off guard by the Eagles’ tenacious defense, and gave up some sloppy turnovers. When they weren’t giving the ball up through steals, Abington was giving it up through poor shot selection. On the other end they were a step slow on some possessions, leaving wide-open shooters.

Despite all that, they were up four points at the half.

“I think we took (Norristown) a little bit lightly in the first half,” junior guard Lucas Monroe said. “We just didn’t come out and play as hard as we could have.”

The Ghosts flipped a switch after halftime and went on to win 57-43, thanks in large part to a 12-6 third-quarter run.

What did Abington do differently coming out of the locker rooms?

“I think it was just the intensity,” said Monroe. “We knew that Abington-Norristown is always a big rivalry, it’s always a big game. We talked about it at halftime and we came out with a lot more energy, especially in the fourth quarter, we really clamped down on defense. We made it hard for them to get shots up. I think it was just the energy and us really coming to play in the second half.”

Monroe did a little bit of everything for the Ghosts, with 11 points, 10 rebounds, and five assists.

That energy was provided by the guy who has lead Abington all year, 6-7 junior Eric Dixon. Dixon scored the Ghost’s first eight points of the third quarter, including a breakaway steal and a bucket via a football pass from Monroe. All the while, Norristown was being serenaded by chants of “who’s your daddy?” and “you can’t stop him” from the Ghost faithful.

“It was just me playing a little bit harder,” Dixon said. “I had to wake up...the game was close, so I just felt like I had to step up a little bit.”

Dixon, who is receiving high-major offers from the likes of Villanova and Virginia, was the game’s high scorer with 21 points -- 15 coming in the second half -- as well as grabbing six boards.

Dixon was also an intimidating presence in the paint. He was responsible in large part for holding the frontcourt duo of Darius Hopewell and Mickeel Allen to a combined seven points.

While the Norristown bigs were held in check for the entirety of the game, Junior guard Tyler Lydons gave the Abington defense fits during the first half. He was the game’s leading scorer after two periods, with 11 points on 5-of-6 shooting. After the break, the Ghosts buckled down and held him scoreless for the rest of the contest.

“He’s a heck of a shooter,” Abington head coach Charles Grasty said. “We made a couple of mistakes defensively, especially in the first half, where kids want to reach and then they kick it out to their shooters. They’re gonna make that. We just told them to stay connected, don’t help down. We felt like our bigs could handle their bigs, so let’s just stay connected on their guards.”

Abington held Norristown to 6-of- 21 from the field, and just two 3-pointers in the second half.

While Abington’s performance may have been somewhat inconsistent, the energy and passion brought by their supporters was a constant.

“This was a big one because everyone wants to see us come play down at Temple,” Monroe said. “It was a great atmosphere, we brought the whole school out basically. A lot of the community comes out; it’s hot in here, so it’s like a big melting pot.”

The Ghosts will meet up with No. 3 seed Lower Merion, who routed Pennridge 63-39 to qualify for the semifinals; the game will be played at the Liacouras Center on Tuesday at 6 PM.

While it may have significantly better ventilation then the Abington gym, the Ghosts fully anticipate the crowd to be just as present.

“It’ll be fun, the community will come out. They’ll support us,” Grasty said. “Our students are having a ball. You saw our student section tonight, they're gonna come out. They’re just enjoying it, that’s what we tell them. Soak it in, it’s a special time.

“We’re not just going to Temple for the heck of it,” he added. “We’re going to try and win a championship.”