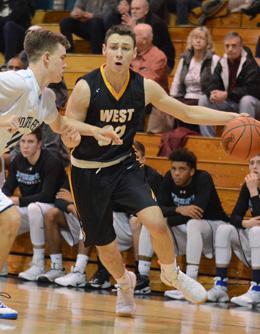 Collin MacAdams (above) and Central Bucks West are one of eight teams left in the District 1 6A bracket. (Photo: Josh Verlin/CoBL)

After a wild first round that saw six of the eight games end in upsets, the top seeds got into the mix in the second round of the District 1 6A playoffs, and all eight held serve on their home courts to advance into the quarterfinals. Now things really get serious, with all eight safely qualified for states and one win away from playing at Temple University’s Liacouras Center in next Tuesday’s semifinals.

Also in action are the eight second-round losers, who are still alive in the play-back bracket, fighting for the two final spots the district gets in the PIAA Class 6A tournament.

Here’s an in-depth look at each of the four quarterfinals, plus a brief glance at the four play-back games as well:

1) Plymouth-Whitemarsh vs. 8) Upper Darby
Bensalem gave P-W a solid scare for half of their second-round clash, but the Owls became just the latest victim to fall to a Colonials squad that’s yet to lose this season. Plymouth-Whitemarsh (25-0) has been cruising since December, suffocating opponents all year long with its full-court press, led by twin seniors Ahmad and Ahmin Williams, who set the tone for a group that throws their bodies around the court like no other around. Their classmate, 6-1 Ish Horn, has had a breakout season scoring the ball, while 6-4 senior Alan Glover returned from a knee injury a year ago to give them toughness and scoring up front.

But of course, what really sets P-W apart is the man in the middle. Junior post Naheem McLeod is still learning the game, but at 7-1 with a wingspan several inches longer, he’s a tremendous rim protector who gives opponents second (and third) thoughts about attacking the hoop, and he’s getting to be a better offensive weapon as well, though mostly from around the hoop. Upper Darby could have an issue with McLeod, as the Royals (17-7) don’t have anybody taller than 6-4 on the roster, and that’s senior wing Jalun Trent.

Upper Darby head coach Bob Miller does have a strong group of guards, however, certainly good enough to earn the program’s first state bid in five years. Mamadou Toure played hero in the second-round win over Downingtown West, banking in a long jumper with under three seconds to play, but he’s not typically counted on to score as much as seniors Trent and Magd Abdelwahab, a springy 6-2 combo guard with the ability to get red-hot from the 3-point arc. UD won’t mind trying to play at P-W’s tempo, but they’ll find it’s not so easy to get into a track meet with a Colonials team built for it.

4) Central Bucks West vs. 5) Coatesville
Central Bucks West got some bad news a couple weeks back, when it found out that senior Collin MacAdams had to sit out several games due to mono. Despite the absence of the 6-foot-5 wing, headed to California (Pa.), the Bucks (20-5) have acquitted themselves quite well so far this postseason, first beaten Abington (minus Eric Dixon) in the Suburban One League semifinals (before losing to P-W) and then handling rival Central Bucks East by nine in its second-round game. But they’re getting MacAdams back just in time to play a Coatesville squad with an identical 20-5 record, having also lost in its league championship game and hungry to get back to Temple.

In MacAdams’ absence, junior guard Jack Mulhearn stepped up with a 17-point, six-assist, four-rebound effort in the win over Central Bucks East; sophomore forward Jack Neri had 15 points and eight rebounds, and seniors Jake Reichwein and Shane McCusker chipped in 11 apiece. Adam Sherman has built his reputation as a coach with a program that’s determined to play the game at its slower, more deliberate pace, with consistent dribble-drive motion action designed to free up 3-point shooters or get open layups. It’s a system that Coatesville is plenty familiar with, but played at a different tempo.

Chuck Moore would love to see nothing more than his Red Raiders get out to an early lead and continue to push the pace, as Coatesville is at its best on the run. Sophomore guards and half-brothers Jhamir “Jig” Brickus and DaPree Bryant are both a few inches under six feet tall, but they’re a dynamic scoring pair who also defend at a high level; while Brickus is the better of the two at getting to the rim, they’re both above-average outside shooters as well. Senior guard Chuck Smith, a transfer from West Chester Henderson, has given them a nice scoring boost as well. Up front is 6-9 senior Tyrel Bladen, an Eastern Kentucky commit.

2) Abington vs. 7) Norristown
Abington and Norristown were both members of the Suburban One League from the creation of the league in 1922 until Norristown left for the Pioneer Athletic Conference in 2016. Both programs have a rich history in the PIAA state tournament, as there are seven combined state championship game appearances between the two teams. Abington still remains in the SOL today, the Ghosts lost in this year’s semifinals to Central Bucks West. In that semifinal game, Abington’s Eric Dixon, a 6-7 junior forward with high-major D1 offers including Villanova, was sidelined due to an injury. Dixon has been a big part of the Ghosts’ attack all year, but classmate Lucas Monroe, a 6-5 guard, and senior point guard Robbie Heath, a four-year starter, have led Abington to a record of 19-5. Once the Ghosts advance to states, they hope to go farther then last year’s first round exit.

As for Norristown (17-7), the Eagles haven’t been to the state tournament since 2013. First year head coach Binky Johnson has his alma mater playing at its best at the right time of the year. Like Abington, the Eagles strive in the up-tempo game. The trio of junior guards which features Vernon Tubbs (5-8), Marcus Sanford (6-0), and Tyler Lyons (5-10) are dangerous in transition, and all three are lockdown defenders. The frontcourt of Mikeel Allen and Darius Hopewell will have its hands full guarding Dixon down-low. If the Eagles are going to stay in the game, they will need to limit Dixon and score in transition.

3) Lower Merion vs. 6) Pennridge
The key word for this game is “juniors.” Both Lower Merion (21-4) and Pennridge (18-6) are stocked full of talented players in the Class of 2019, including quite a few high-scoring guards and a couple improving post prospects. And now they’re all starting to see what it’s like to be counted on in big moments; so far, Lower Merion has passed all its tests, including a Central League championship over Penncrest. Pennridge has its fair share of big wins, too, including a double-overtime road victory against defending state champ Reading just a couple weeks back, so the Rams won’t be intimidated in the slightest by the Kobe Bryant Gymnasium.

Gregg Downer’s Aces are led by a junior class that goes eight deep on the roster, with four in the starting lineup. Jack Forrest, a 6-5 sharpshooting wing, has two Division I offers, from Penn and Columbia, and interest from several other high-academic D-Is; Steve Payne, a 6-1 guard and scholarship-level prospect in his own right, is an athletic slasher of a combo guard who can really go off if his outside shot is falling; Darryl Taylor, a 5-11 sparkplug, has a developing offensive game and often guards the opponents’ best player; Josh Martin, a 6-5 forward, had a 12-point, 13-rebound double-double in the second-round win over Conestoga. And the starting lineup’s only senior, 6-0 Harrison Klevan, has been making clutch 3-point shots all season long.

Dean Behrens doesn’t have quite as many juniors in his rotation, but the two he counts on are major pieces. Sean Yoder, a 6-3 guard with a Division I offer of his own (High Point), is an all-around athlete who can score from three levels, rebounds and distributes well. Down low, his classmate Jonathan Post is a solid-bodied 6-6 forward whose father, Jan Post, was a 7-footer on Temple’s roster in the late 1980s and early 1990s. Also up front for Pennridge is 6-6 senior Tyrese Lewis, who along with Post gives the Rams more size up front than Lower Merion typically puts on the court. If those two can have their way on the glass, the upset is a real possibility.

16) Bensalem vs. 24) Downingtown West
Bensalem is searching for their first trip to the state playoffs since 2011 with two wins in playbacks. The guard oriented team features Kris Shields, Ward Roberts, and Taco Douglas, all of which can score with ease. Downingtown West nearly pulled off another upset on Tuesday night and have shown their ability to hang tough in games despite of their record. The Whippets feature big men Greg Barton (senior) and Will Howard (sophomore) as well as a multi-talented junio guard Naseem Roberson.

12) Downingtown East vs. 20) Central Bucks East
Downingtown East is only two wins away from the first state tournament berth in the school’s history. Senior Malik Slay, a 6-2 scoring guard, is doing everything in his power to ensure the Cougars make history this year. Corey Hernandez and Andrew King are the second and third options for Downingtown East. CB East’s three-headed attack is led by senior guards Kyle Cassidy and Jesse Rivera, and junior forward Nick Roggio. Both teams like to slow it down and play at a measured tempo, so don’t expect a ton of scoring in this one.

18) Neshaminy vs. 23) Perkiomen Valley
These two teams met last year in the district playoffs and PV won in overtime on its home court. Chris Arcidiacono, Neshaminy’s go-to scorer, has the ability to go for 30-plus points in any given game. He’s joined by senior classmates Anthony Papeo and Charles Dominik, all 3-point specialists, in the backcourt, plus 6-7 Danny Bodine up front. For PV, also a guard-heavy team, is led by junior Tyler Stretchay. When Stretchay is face-guarded, which is almost every game, look for seniors Kevin Bearnabe and Andrew Light to step up and score.

14) Conestoga vs. 22) North Penn
Conestoga needs two wins to punch its fifth consecutive appearance in the state playoffs. The Pioneers have been led by junior guard Zach Lezanic, a high quality scorer and distributor, as well as Milton Robinson, who can pour in points when he gets going. As for North Penn, they have a talented duo of seniors in David Robinson and Chris Coleman to go along with junior guard AJ Mitchell. The matchup of Lezanic and Mitchell should be one to keep an eye on throughout the game.