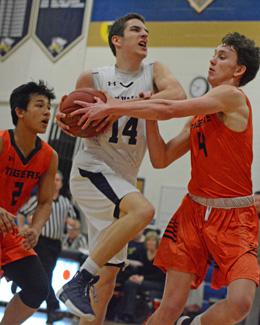 Vinny DeAngelo had one thing on his mind: get to the hoop.

From the moment Sun Valley’s first playoff game in nearly 20 years got underway, the Vanguards’ high-scoring junior guard put that mindset to work, taking the opening tipoff and racing in for a layup before five seconds had even ticked off the clock of a District 1 5A first-round game against Marple Newtown.

“We actually worked on that in practice, and it worked to perfection,” said junior wing Marvin Freeman, who jumps center for the Vanguards.

After waiting 11 days since the regular season ended, it was exactly the start that Sun Valley needed.

“We could feel in the locker room there was a little anxiety, people weren’t themselves, they kept to themselves,” Sun Valley head coach Steve Maloney said. “But once that layup came in, I think he settled down and I think the team settled down.”

Sun Valley certainly didn’t show too many nerves, jumping out to an early lead at home and hold on for a 62-56 win over Marple Newtown on Wednesday night.

It was the first playoff game Sun Valley had hosted since 2000, when Maloney was a sophomore for the Vanguards as they beat Bishop Shanahan before losing to Kennett in the following round.

In the 17 years since, Sun Valley didn’t even have a winning record, though they had a few road playoff appearances in what then was the old AAA classification; that included two years ago, when they traveled to Octorara and lost in the first round.

That was until a 16-6 regular season earned the Vanguards the No. 6 seed in the second year of the new district 5A classification, giving them the ability to play in front of the home crowd one final time. They just had to wait it out first, after finishing up the regular season against Southern Lancaster County on Feb. 10.

“It felt like the longest days of my life, the whole week I just wanted to fast-forward to tonight,” DeAngelo said, “but I just kind of visualized that practice and just stayed within myself and my teammates.”

DeAngelo, a 6-foot-1 guard who entered the postseason as one of Delaware County’s leading scorers at well over 20 points per game, finished with 19 points, five rebounds, four assists and three steals in the win over Marple, missing his only two 3-point shot attempts as he got all of his production by getting to the hoop. Freeman, a 6-3 wing, posted a team-high 21 points and 10 rebounds on only 11 shots, going 7-of-9 from the line as well.

The two stars weren’t the only key contributors: Lance Stone, like Freeman and DeAngelo a junior, had eight points and 10 rebounds; their classmate, Isaac Kennan, added five boards and three assists.

That group of four juniors is a big reason why Maloney was high on this group entering the season, despite the fact they’d won just six games a year ago. Strong showings at the Hoop Group team camp in July and other offseason events keyed in the fourth-year head coach that things could be different.

“They didn’t need me to get in the gym,” Malone said. “I had total commitment, even with the baseball and football guys, they were still here. I knew the commitment was there and we just had to piece it together.”

It took Sun Valley a couple weeks into the regular season to do that, after starting off the year 2-4 with four straight losses at one point. But the Vanguards snapped into form in late December, ripping off eight straight wins at one point, and they’ve now won seven in a row heading into the district quarterfinals.

The Vanguards (17-6) were up four at halftime and seized control in the third quarter, going up as many as 13 points early in the fourth before Marple Newtown made a push to get within five in the final few minutes.

Sun Valley’s opponent in the next round is none other than Chester, a former league opponent of Sun Valley’s when Maloney was in school, when the Vanguards were still in the Del-Val before moving over to the Ches-Mont about a decade ago. The Clippers (17-6) have won more state championships than any other school in the state (nine); Sun Valley is just trying to get back to states for the first time since 1995.

If they can win at Chester, Sun Valley is guaranteed one of seven District 1 5A berths in the PIAA tournament. With a loss, they’d need to win just one of two more games to earn one of the final three spots.

Beating Marple Newtown at home is one thing, picking up a playoff win at the Clip Joint is something else entirely.

“We can kind of give them an idea, but they’re not really going to know until they’re down there,” Maloney said. “They know it’s an uphill battle, and obviously the [Philadelphia] Eagles have showed that you just have to play hard, and hopefully we can keep it close and see what happens.”