District 1 6A: CB West bands together in MacAdams’ absence vs. CB East 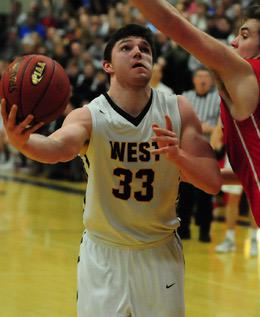 CB West senior Jake Reichwein (above) was one of several Bucks to step up in Collin MacAdams' abscence. (Photo: Steve Sherman/ CoBL)

DOYLESTOWN – Two years ago, CB West went to states where current seniors Collin MacAdams and Jake Reichwein contributed as sophomores off the bench on a team that defeated District 3 runner-up Central York before falling to eventual state champion Roman Catholic.

Last year, the Bucks were stunned when 21st-seeded Hatboro-Horsham sent them home early in a 2-point opening round District 1-6A playoff loss to the Hatters.

With MacAdams relegated to the bench Tuesday night due to a recent bout with mono, the 6-5 senior forward who is committed to Division II California University of Pennsylvania could only watch as CB West took on visiting archrival CB East in a D1 second-rounder on Court Street.

That’s OK. His brothers in arms took care of the business as the fourth-seeded Bucks toppled the 20th-seeded Patriots 64-55 in front of a packed house after getting out to an early 24-8 lead after only one period of play.

“We definitely want to get him an opportunity to play in states,” said 17th-year CB West head coach Adam Sherman. “We want to be able to play basketball in March.”

“All spring and fall, we work really hard and that’s what this is all about. And we definitely want to give Collin an opportunity to get back on the court.”

In the absence of MacAdams, who was actually cleared to play on Monday, Reichwein (11 points) and 6-3 sophomore Jack Neri (15 points) crashed the boards and controlled the glass.

Reichwein cut loose with three field goals from down low in the first quarter while Neri – who got the start in place of MacAdams – hit for two shots from the floor in the first period while adding three in the second quarter.

“Our team is a family; when we all play together, we all want to protect one another.”

After going scoreless in the middle two quarters, Reichwein exploded for five of his team’s 19 points in the final frame. Neri canned one more shot from the floor in the third period then hit 3-of-5 foul shots in the final frame to cap a 15-point performance.

“We were able to get them the ball inside and they were both able to finish,” stated Sherman. “They are relentless rebounders, which I thought really helped us out a lot.”

“Our plan was to play hard and play good defense and everything else would just fall into place,” added Neri. “I always look forward to these kind of games; they’re always fun.”

CB West got off to a blazing start in this one, hitting 17 of their 21 field goals in the first half. Ten of those shots from the floor came in the first period including four 3-pointers, two of which came off the hands of point guard Jack Mulhearn. The 5-11 junior for the Bucks canned three treys in the game, while shooting 6-of-8 from the foul line for a 17-point performance that was more than nine points over his game average.

“He had nice change of speed, got his mid-range game going and he shot the ball well,” explained Sherman. “He really orchestrated our offense well.”

In the second quarter, Reichwein and classmate Shane McCusker (11 points) got into some foul trouble, however. With those two on the bench, it opened some holes for the Patriots and the visitors took full advantage.

CB East junior reserve Leo Masterson (10 points) came off the bench and combined with classmate Nick Roggio (10 points) to spark a 7-2 Pats’ rally, a run the visitors expanded to 9-4, cutting the Bucks’ lead to nine each time.

In the closing seconds of the first half, CB East junior Ben Markowitz (10 points) poured a turnaround jumper into the basket to cut the Patriots’ deficit to eight points. However, CB West sophomore Mika Munari (7 points) hit a contested jumper in the lane and Neri canned a backdoor layup to expand the Bucks’ lead back to 10 as the home team went into the locker room up, 38-28.

“Mika Minari is only a 10th-grader and the first couple of games, he was walking on eggshells out there, afraid to make mistakes,” stated Sherman. “Today, he had some unbelievable takes; he was awesome.”

“I thought Jack Neri was fantastic on the boards and made some huge plays for us. He had great energy and did a really good job, defensively. Both of them have come a really long way.”

After combining on 34 points in the second period, East and West scored only half that many together in the third quarter. The Bucks hit just 2-of-11 shots from the floor in the period while the Pats canned four of six shots to cut their deficit to seven heading into the fourth quarter.

“We had some clean looks, a couple threes that were pretty wide open; they just didn’t fall for us,” explained Sherman. “You just have to weather that storm with good defense and rebounding and we were able to do that.”

With less than three minutes remaining in regulation, CB East senior Jesse Rivera – who led the visitors with 16 points – canned a trey to cut the Pats deficit to eight points. With 1:08 left, classmate Kyle Cassidy (5 points) hit a 3-pointer that cut the CB West lead to six.

The Bucks closed the game out by canning 15 shots from the foul line in the fourth quarter. West would have done that sooner, had it not missed its other 10 free throws in the final frame.

A telling moment in the battle was missed 1-and-1 foul shot opportunity by Neri with three minutes remaining in regulation. Instead of dropping back on defense, the sophomore secured the rebound and drew an ensuing foul. He didn’t miss his next two free throws, putting the Bucks back up by 11.

“We all practiced really hard because we knew we needed this game to get to states,” added Neri. “We all just looked up to the challenge and it was awesome.”

Next up, CB West will host fifth-seeded Coatesville, a 63-44 winner over No. 12 Downingtown East. The winner secures a berth in states. That game will take place 7 p.m. Friday night on the Bucks’ home court.

NOTES: According to Sherman, this was the first time in his 17 years as coach that CB West took on any team from the Central Bucks in the district playoffs.