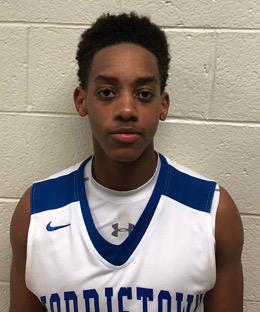 When you watch Norristown and Perkiomen Valley play each other, you notice the glaring differences in the style of play of the two teams.

Norristown, the most athletic teams in the Pioneer Athletic Conference, wants to constantly force the ball up the floor and score as quickly as possible.

Perk Valley and head coach Mike Poysden are almost the complete opposite. The Vikings hope to slow the game down, waiting until they find the right shot -- even if it takes over a minute to do so.

“PV is one of those teams that is so hard to match up with,” Norristown’s head coach Binky Johnson said. “They are one of the most underrated teams I’ve seen all year. They cause me nightmares because they are so well-structured and coached.”

So coming into Tuesday’s PIAA 6A District One second round matchup against PV, the Eagles knew they would need to force the pace of the game into their favor. In the two previous matchups between the two clubs earlier this year, Perk Valley was able to control the pace, and beat Norristown. In the other game, Norristown snuck away and won a closely contested game.

“We had to play disciplined,” junior guard Marcus Sanford said. “We needed to speed them up and make them play our game. They want to slow it down and hold it for 45 seconds each possession. We need to make every possession count. Can’t turn it over and we have to score.”

To start the game on Tuesday night, Perk Valley’s style was played throughout the first half, only 26 combined points were scored between the two team in the first two quarters. But in the second half, the game fell back into Norristown’s favor, and the Eagles outlasted Perk Valley to win 50-41, and clinch a spot in the PIAA 6A state tournament.

After Norristown lost to Spring-Ford in the semifinals of the PAC back on Feb. 9, the Eagles were given 11 days before their first district game. They were seeded seventh in District One, which meant a first-round bye. Since Johnson and Norristown had already played PV twice and knew the Vikings very well, they knew what to prepare for in the long days of practice.

“We did the old school ‘10 passes before a shot’ drill,” Johnson said. “We usually spend most time in practice doing defense, but we had so much time. One day we came in and passed it 15 times to mimic the pace of Perk Valley.

“People ask me why I’m not that upset after the [Spring-Ford] loss, I was excited because we haven’t had quality practices in so long,” he continued. “As an inexperienced team, it would benefit us. As a team that is growing, we can get back to our defensive principles. Our guys were so excited to get on the floor and defend somebody.”

The Eagles showed their desire to play defense in the first quarter on Tuesday. Perk Valley shot just 1-of-7 from the field in the opening period, as every shot was heavily contested.

But things were shifted back to Perk Valley’s favor in the second quarter, when the Vikings won the quarter 9-2. Perk Valley slowed down the pace and took its time trying to find a shot. Zach Krause hit two 3’s for the Vikings in the first half, en route to hit 10-point performance on the night.

Once the third quarter started, Norristown began to take over. A few nice finishes at the rim by 6-7 senior Darius Hopewell (12 points) and 6-4 junior Mikeel Allen (10 points) had the Eagles up by six points entering the fourth quarter. When junior point guard Vernon “Man-Man” Tubbs (11 points) was able to pull the trigger from deep and finish acrobatically at the rim in the fourth, mixed with the inspiration from the chaotic Norristown crowd, the Eagles pulled away for the win.

Even though PV lost, the Vikings’ state tournament hopes are still alive. Neshaminy will play host to the Vikings on Friday in a playback game. This time, it will be loser-goes-home; the winner will be one more victory from a state berth.

With the win, Norristown is guaranteed a spot in the state tournament, somewhere a program with five state championship game appearances, and one win, in its past hasn’t been in five years. With Johnson, a first year head coach -- hired on September 25 -- and a group of young players with mostly JV experience, this has been a very enjoyable season for the Norristown faithful.

How much has the team grown? Johnson remembers going over with the team in the beginning of the year how to line up for pre-game lineup introductions because the majority of the team didn’t do it on JV.

“To embark on such an accomplishment this year is amazing,” Johnson said. “The growth is like light years for this young club. We had to teach them a routine for warm up drills. Our staff has been putting in so much time.”

No. 2 seeded Abington will be the next opponent for the Eagles, after the Ghosts defeated Neshaminy on Tuesday night. Abington will be one of the most athletic teams that Norristown will face off against this year, with the ability to play an up-tempo style similar to that of the Eagles.

“This time of year any game is going to be tough,” Johnson said, “we have to prepare to play higher caliber teams. You want to play within the framework of what we do best. We can’t divert from our style.”