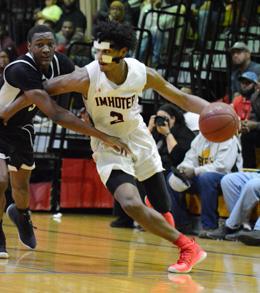 Chereef Knox (above) and Imhotep have so far avoided the pitfalls of previous even-numbered years. (Photo: Josh Verlin/CoBL)

Every other year, this is around when things go sour for Imhotep Charter.

In odd-numbered years, the Panthers have captured Public League titles every season since 2009, including an overtime win over Martin Luther King in 2017. But those alternate years are a different story: there’s been losses in the semifinals, the quarterfinals, even earlier in the Pub tournament, no matter how much talent there’s been on the roster -- and there’s been no shortage of future Division I players throughout the years.

“We do things well in the odd years,” Panthers head coach Andre Noble said, “and the even years, the basketball gods spray some pixie dust on us and we’ve struggled. But these guys have been rejecting that, saying ‘we’re about to break that’ the entire time we keep bringing it up.”

They’re now just one win away from snapping the pattern, after beating Mastery Charter North 54-46 in a Public League semifinal at South Philadelphia HS on Tuesday evening.

The 2018 Pub championship game, to be played at the Palestra on Sunday afternoon at 3 o’clock, will be a rematch of the 2017 edition, with Imhotep and King facing off.

Once Imhotep gets to this point, the results have been not just good, but perfect. The Panthers are 6-0 in Public League title games, winning three straight from 2009-11 and then in 2013, 2015 and 2017. They’re also 5-0 in state championship games, and are the defending PIAA 4A champs as well.

But gone from that team is a trio of Division I freshmen, including Koby Thomas (Robert Morris), David Beatty (South Carolina) and Daron Russell (Rhode Island), the program’s all-time leading scorer. All year long, Noble has stressed how this year’s version is still very much learning to win on its own right, despite having no fewer than five Division I prospects in the eight-man rotation.

“This group is finding those leadership things out and finding out who they are as they get going,” Noble said, “and so I think they’re finding themselves and [going] ‘what do I do to make sure we get over the hump.’”

So there was plenty of cause for concern for Noble when his Panthers fell behind to the Pumas 6-0 out of the gate, not displaying the same form they did when they beat their Public League ‘A’ Division rival by 30 on Jan. 25.

Noble, normally not afraid to get quite expressive in the huddle, figured he’d take a different approach this time around.

“He was trying to stay calm, normally he’s throwing his board and yelling at us and stuff,” Scott said. “Him staying calm helped us to stay calm.”

The Panthers didn’t exactly blow away their competition, but the defensive effort was exactly what Noble wanted to see out of his group. Imhotep held Mastery North under 33 percent shooting from the floor (16-of-49, .326) and held the Pumas to nine points in both the second and fourth quarters.

“We’ve got to do a better job of just being ready,” Noble said. “We didn’t play hard enough at the beginning of the game and then we let them jump out on us... I thought we did a good job defensively as we moved on, the first quarter was just atrocious.”

Mastery North, which has a chance to extend its season in a District 12 play-back game against either Archbishop Carroll or Bonner-Prendergast at a date and time to be determined, was led by juniors Jamir Reed (16 points/7 rebounds) and Tahj Campbell (13 points/13 rebounds).

Noble and his Panthers don’t shy away from the fact that there’s more pressure on them year after year, especially with who’s on the roster. Bishop, a 6-4 wing, and Scott, a 6-7 wing, both already have high-major offers, as does 6-8 sophomore Elijah Taylor; Riggins and Knox both have multiple mid-major Division I scholarship offers on the table as well, as does another junior, Karam Cummings.

They ran an undefeated 10-0 through the regular season in the Public League, winning most by double digits and quite a few by 25-plus points. But they’re well aware that the regular-season results won’t matter a bit in the playoffs -- and the even-number streak is still in the backs of their minds.

“[We] didn’t play great, didn’t do a great job, but we pulled out a win,” Noble added, “and we’ll take it, we get to play in the Palestra on Sunday.”