After an upset-filled first round -- six of the eight opening-round games saw the lower-seeded team win on the road -- the District 1 6A bracket is already all sorts of weird. Now the top eight seeds join the fray, most of which will have to face a team that just pulled off one road upset and now finds itself one win away from a state berth.

District 1 places 10 teams in the state bracket, meaning all eight winners of Tuesday night’s games guarantee themselves a spot in PIAAs, as well as a guarantee of at least four more games between quarterfinals, seeding games and the first round of the state tournament. But the eight losers are not done; they’ll head into the playback bracket, whose final two remnants will also earn state bids.

Here’s a look at the eight second-round games, all of which tip at 7 PM except for Abington/Neshaminy, which tips a half-hour later:

1) Plymouth-Whitemarsh vs. 16) Bensalem
Plymouth Whitemarsh (22-0) has been dominant all season long, cruising through the Suburban One en route to a league championship. The Colonials have been led by 7-2 junior Naheem McLeod, who has been a game-changer with his abilities on the inside on both ends of the floor. Senior guards Ish Horn and Ahmin Williams lead an athletic and very talented backcourt that complement nicely to McLeod’s game. As for Bensalem (15-8), they are fresh off a last-second, 58-55 overtime victory over Pennsbury in the first round of the playoffs. Senior guard/forward Kris Shields hit the game-winner against Pennsbury and can pour in points in a hurry for the Owls, as can guards Ward Roberts and Taco Douglas. This will be their first matchup this season. 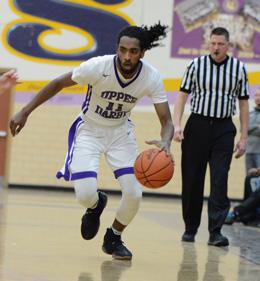 Magd Abdelwahab (above) leads an Upper Darby program that hasn't been to the state tournament since 2013. (Photo: Josh Verlin/CoBL)

8) Upper Darby vs. 24) Downingtown West
The Whippets barely snuck into the district playoffs, getting in as the last seed, but that’s all they needed -- and they stuck around at Garnet Valley, where the Whippets (12-11) ended the Jaguars’ season on the road. Junior guard Naseem Roberson, NBA All-Star Kyle Lowry’s cousin, led the way with 14 points, and senior wing Greg Barton was crucial in the victory. Upper Darby chalked up a record of 16-6, with non-league wins over Norristown, Spring-Ford, and Pottsgrove, among others, improving its win total from a year ago by 10; if they wint his one, they’ll be back in states for the first time since 2013. Seniors Magd Abdelwahab and Jalen Trent have led Upper Darby’s balanced, up-tempo scoring attack this year.

4) Central Bucks West vs. 20) Central Bucks East
As CB East took down No. 13 Owen J. Roberts on Friday night, members of the CB West program were on hand in Chester County to see their second-round opponent, even though there probably wasn’t much they didn’t already know. The two schools are part of the same school district in Doylestown, and play twice a year in the Suburban One League. East (13-10) is led by senior guards Kyle Cassidy, a DeSales commit, and Jesse Rivera. Junior Nick Roggio, who hit the last second shot to beat OJR, is the lone force on the inside for East. For West (18-4), seniors Collin MacAdams, Shane McCusker, and Jake Reichwein have led the Bucks to the fourth overall seed in the district tournament. West won both previous matchups this year, by 10 at home on January 6 and then by seven on the road 24 days later.

5) Coatesville vs. 12) Downingtown East
On Friday night, Downingtown East claimed its first ever-postseason victory since Downingtown High School split to East and West in 2003, beating Penn Wood by 20 in the opening around. The Cougars are led by senior guard Malik Slay, who has a great knack for finding his teammates but can still score with ease, plus sophomore big man Andrew King; in the Penn Wood win, senior Nate Robertson and junior Tariq Kalim also stepped up in the scoring column. Coatesville, the Ches-Mont runner-up, has been guided all season by electric sophomore guard Jhamir Brickus, but also feature a D-I big man in Tyrel Bladen (Eastern Kentucky) and several other talented scorers like DaPree Bryant and Chuck Smith.. The Red Raiders were winners of 17 of 18 going into the Ches-Mont finals, with the only loss in that time coming to Downingtown East, as they split the season series with the Cougars. 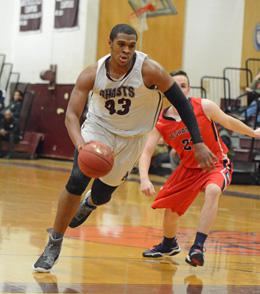 Eric Dixon (above) and Abington get a rematch against a Neshaminy team they've beaten twice this year. (Photo: Josh Verlin/CoBL)

2) Abington vs. 18) Neshaminy
Neshaminy has had some big wins this year, defeating Pennsbury, Pennridge, and Holy Ghost Prep in the regular season before beating Central Bucks South in the opening round of districts, but it would probably like to forget this years matchups against the Galloping Ghosts of Abington. Abington took down Neshaminy twice this year, beating them 72-49 and 82-60. Chris Arcidiacono has been terrific for Neshaminy (14-9) in his senior year, and is joined by classmates Anthony Papeo and Charles Dominick in the backcourt. Abington (18-5) has dominated opponents all year, not just Neshaminy. The Ghosts are led by high-major recruit, junior forward Eric Dixon. A 6-7 big-bodied forwrad with a soft touch around the rim, Dixon will need to be shut down if Neshaminy wants to advance to the state tournament. He’s joined by classmate Lucas Monroe and senior point guard Robbie Heath.

7) Norristown vs. 23) Perkiomen Valley
Exactly three weeks to the date of this game ago, Perkiomen Valley took down Norristown at home to keep both its district and PAC playoff hopes alive. While the Vikings didn’t get into the PAC’s Final Six, they have made their presence known in districts, knocking off the PAC champion and district No. 10 seed Methacton in a big upset on Friday night. Perkiomen Valley is led by junior wing guard Tyler Strechay, a dynamic shooter that can fill up the scorebook quickly. As for Norristown, the resurgent Eagles feature a well-balanced attack in terms of scoring with junior Mikeel Allen at the forefront of what they do offensively and on the boards. The Eagles and Vikings split the PAC season series with each team winning on their home floor.

3) Lower Merion vs. 14) Conestoga
Conestoga survived a nearly disastrous collapse in the first round of districts, beating Cheltenham 56-54 in overtime behind Milton Robinson’s 18 points. The Pioneers have been led by junior guard Zach Lezanic who consistently creates shots both for himself and teammates. Conestoga, however, was not a member of the Central League playoffs after finishing fifth in the league. Lower Merion was the champion of said playoffs, following a game-winning layup from Steve Payne to lift the Aces over Penncrest in a thrilling championship game, following up on an 18-4 regular season. Junior Jack Forrest is the latest in Lower Merion’s storied history of accomplished players and has led the Aces all season, along with classmate Steve Payne; recently senior guard Harrison Klevan has become a reliable No. 3 scorer. However, Conestoga got the best of Lower Merion in both matchups this season, winning the most recent one on the road 65-61.

6) Pennridge vs. 22) North Penn
After barely sneaking into the district playoffs, North Penn took down host Spring-Ford on Friday night, 62-60, in part of a wild opening night. Seniors David Robinson and Chris Coleman led the Knights (13-10) on Friday night, as they have all year long. SOL Continental Division rivals, North Penn and Pennridge face off twice a year. This year, Pennridge swept the regular season series. The junior class of Sean Yoder, Jon Post, and Tyrese Lewis has led Pennridge (17-5) the whole year, typically scoring the majority of the points on a given day for the Rams. Pennridge lost to Plymouth-Whitemarsh a week ago in the SOL playoffs, but defeated state power Reading High earlier this month in double overtime.