Seniors lead the way in Neshaminy's win against CB South 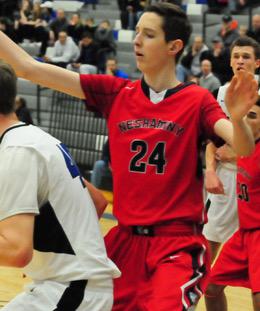 Neshaminy's Danny Bodine (above) made a key defensive stop to seal the win against CB South. (Photo: Josh Verlin/CoBL)

It can swing a game, as well as a season.

Of course, it’s better to obtain it later, rather than sooner.

Neshaminy suffered a 5-game losing streak during a midseason slump but recovered in time to win four of its last five, gaining momentum going into districts.

CB South went unbeaten at 6-0 during the first half of its Suburban One Continental League slate, went 2-4 in the second half of its league season, dropping five of its last seven games overall heading into districts.

Things didn’t appear to get any better for the 15th-seeded Titans preparing for the postseason. That’s when they lost junior point guard Cole Prezelski, who suffered a wrist injury in a scrimmage only days before the start of the playoffs.

Still, CB South came through with a yeoman’s effort facing 18th-seeded Neshaminy Friday night on the Titans’ home court. Taking a 40-37 lead into the final frame, CB South could not hold on, however.

It was all thanks to the Neshaminy seniors, who logged just about every minute and certainly scored every single point in a 50-47 triumph over the Titans that sends Neshaminy to a second-round matchup Tuesday night vs. No. 2 seed Abington (18-4).

While senior Chris Arcidiacano led the scoring effort for Neshaminy with 25 points including 15-of-16 from the foul line, helping the visitors to a 48-47 lead with under five seconds to go, it was a key defensive play by 6-8 classmate Danny Bodine (4 points) that helped secure the win.

Bodine blocked the inbound pass from junior Brady Prezelski (6 points), secured the ball, then drained it for 50-47 lead the home team could not overcome on a final half-court shot by junior Ian McCall (12 points) that clanked harmlessly off the glass as the clock struck zero.

“I was just trying to come up with a steal,” said Bodine, whose last-second layup was the only bucket he canned from the floor in the entire playoff. “I probably should have dribbled it out, instead of going up for the layup but we pulled it out so ...”

12th-graders fill in seven of 11 roster spots for Neshaminy so a loss could have been the last time the group suited up together.

“This is a huge,” added Bodine. “We’ve been playing together for the last four years and we finally got a playoff win. Last year, we came up a little short (against state qualifier Penn Wood). This year, we were able to finally get a win; it’s the first one since 2011.”

The last time Neshaminy won a postseason duel was during former Villanova standout Ryan Arcidiacono’s junior season. Chris came through in lieu of Ryan in this one.

“He did a great job of just penetrating.”

Arcidiacono averaged 25 points-per-game this season and he tallied nearly that many (24) in a 62-51 late-season triumph over Pennsbury, another first for Neshaminy since the 2011 season. Chris had help in that duel from classmate Anthony Papeo, who notched 12 points and Charles Dominic, who tallied 10.

Those three dominated the scoring effort for Neshaminy in the district opener with Papeo coming through with 10 points including a field goal in each quarter, two of which went for three in the first two frames.

“Chris is our guy but Anthony had 10 points and Charles had three timely threes, when we needed it,” said Neshaminy second-year head coach Mark Tingle.

“We were down six (points) before the end of the third (period) and he hit a big one.”

There was plenty of drama before the end of this one.

Prezelski canned his second trey in the game to put the home team up 40-34 with under 30 seconds left in the third period. With the counter-shot by Dominic, it was 40-37 favor the Titans heading into the final frame.

“Charles is super-clutch,” said Arcidiacano. “When they are doubling me, Charles is open and he knocks his shots down at the right time.”

Arcidiacano began the fourth quarter with a 4-1 run to tie things at 41 with six minutes remaining.

CB South senior Jack Johns (6 points) answered with back-to-back baskets sandwiched around a block to put his team up 45-43 midway through the last period.

With 2:33 left, Arcidiacano avoided the steal before dishing the ball off to Dominic, whose third trey in the battle put Neshaminy up, 48-47.

An ensuing turnover by the Titans at the 1:40 mark paved the way for Neshaminy to erase all but 25 seconds off the game-clock. While CB South finally sent senior Greg DeLuca to the line, the Neshaminy reserve missed the first half of a 1-and-1, opening a door for CB South.

The Titans could not answer, however, with senior Nate Robinson (14 points) clanking a one-handed hook shot off the glass as Arcidiacano came up with the ensuing rebound with 5.7 seconds left.

Arcidiacano followed by missing his only foul shot of the evening and that set the stage for Bodine’s spectacular play on defense.

“I was expecting to knock both my (foul) shots down but it didn’t go my way,” explained Arcidiacano.

“Luckily, Danny had a great defensive play and he iced it for us.”

“We needed this,” added Chris. “This is our first playoff win in seven years so it feels pretty good to give one back to the high school.”

“All the seniors, we’ve been working hard our whole lives and we haven’t had a playoff win. This could have been our last game playing together so we just wanted to play for each other.

The loss of Cole Prezelski didn’t help the Titans’ cause, either.

McCaw, a 6-5 junior center, started in place of Prezelski and did a nice job, coming through with 12 points including a pair of field goals in each of the second and third quarters.

CB South has made it to districts in 12 of its 14 seasons on the hardwood, though this is the fifth consecutive year it has exited in the opening round.