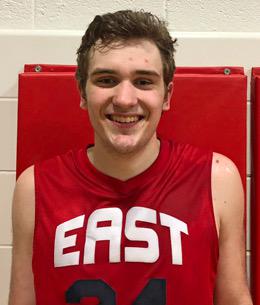 When Central Bucks East is orchestrating its offensive possessions, the players have one thing in mind.

Find the right shot. Not the first shot.

Often times, the Patriots will use their quickness to drive into the lane and get a decent-looking shot opportunity. But instead, they will pass it back out and attempt for a better look. In doing so, possessions can last up to two minutes long, or even longer.

As a player, it can be tempting to fire up a shot the first look you get, especially if your team has just dribbled and passed for a minute straight. And sure, some looks that are passed up would be an excusable miss. So with the temptation, how does C.B. East know which shots it wants to take?

“At first it’s hard,” point guard Jesse Rivera admitted, “but we work on it all the time so we get used to it. As teammates we hold each other accountable, so we need to make sure we are making the right decision.”

In a 52-50 overtime win over Owen J. Roberts in the first round of the PIAA 6A state tournament on Friday night, the Patriots only took 29 shots. But since they were good looks, and the Patriots are a talented shooting team, 20 of the shots fell; good for 69 percent shooting from the field.

“We make sure to get good shots and share the ball,” 6-foot-5 junior Nick Roggio said. “When we play teams, especially in the playoffs, it’s a big part of our game.”

Roggio played the role of hero for the Patriot-faithful on Friday, slipping behind his defender on a broken play and laying the ball in the hoop with three seconds left to take the lead.

Even in overtime with the game on the line, C.B. East looked composed with the ball. Rivera, a 5-10 point guard and main ball handler, fumbled the ball momentarily before calmly turning and throwing a leading bounce pass to Roggio for the lay in.

Henrysen had confidence in Rivera to get into the lane and make a play to send the Patriots (13-10) one win away from the state tournament.

“We figured if we spread them out, we would be able to get to the second level of the defense,” he said. “Jesse’s been doing that for us all year.”

Roggio’s late shot put him up to 15 points on the night to lead the Patriots. DeSales commit Kyle Cassidy dropped 13, and Rivera had 12.

OJR’s Nick Massa hit a corner three in regulation to send it to overtime, where C.B. East took a quick five-point lead. Sa’Vaughn Davidheiser’s two free throws tied it up at 50, until Roggio’s layup ultimately decided the game.

OJR, which was hosting its first district playoff game since 2009, trailed by seven points entering the fourth quarter. With a few timely forced turnovers and some heroic shooting late, the Wildcats kept climbing back into the game. Massa’s three-pointer off of a broken play sent it to overtime, and Dawson Stuart nailed three of his game high 18 points in the extra period.

Senior guard Sean Praweckyj and Davidheiser both added nine for the Wildcats.

This was the second year in a row that C.B. East won in overtime of the first round of the district tournament. A year ago, the Patriots downed Council Rock South in the fifth period.

With the win, C.B. East will advance to face no. 4 seeded Central Bucks West.

C.B. West, a Suburban-One League Continental Division rival of C.B. East, has already beaten the Patriots twice this year, but with the highly competitive atmosphere the two teams produce, East is confident that if their scheme works, they will walk away victorious.

“They know us very well, and we know them very well,” Henrysen said on the rivalry. “There will be no secrets. It will come down to whoever makes their shots.”

“Despite the hype and the rivalry, we need to focus on what we do,” Rivera added. “It’s the matter of the right shot whenever it comes.”