From Alaska to Gwynedd Mercy, Lopez brothers stay together 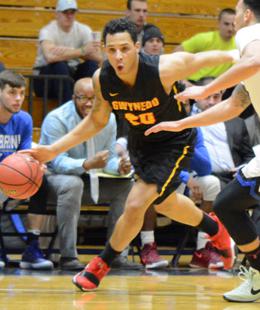 Manny Lopez (above) and his brother Chris have traveled a long way to get to Gwynedd-Mercy. (Photo: Josh Verlin/CoBL)

There’s only been two minutes of Manny Lopez’s life where he was truly separate from his brother Chris.

Being the older twin brother, Manny was born a grand whole two minutes ahead of Chris on July 25, 1995, but since then, the two have done everything together.

Growing up on the Fort Richardson military base in Anchorage, Alaska, the Lopez brothers played on their first basketball team at age five, coached in a rec league by their father Manuel, a Puerto Rico native and a supply system analyst for the base who retired at the rank of master sergeant.

Manny and Chris were always on the same squad growing up, recalling school teams from as early as fourth grade. Fourth through eighth grade, then all four years of high school ball at Anchorage Christian, with travel seasons mixed in throughout.

They didn’t have any scholarship offers their senior year of high school until they attended a Sixers camp in Wayne, Pa., where they were jointly recruited to Valley Forge Military College, a two-year institution 4,300 miles away from home.

With associate’s degrees in business administration after their time at Valley Forge, the brothers awaited the best financial aid offer -- “followed the money,” as Manny put it -- and decided on Gwynedd Mercy, where they’re now seniors on the basketball team.

“We just grew up together, and we always felt like when we play basketball we always play better together on the floor,” Chris said.

They’re identical, though if anything, Chris now appears older, equipped with a couple extra inches of height, a deeper voice, and some facial hair.

With almost two decades of basketball experience together, it’s no wonder Manny and Chris have great chemistry. They’re brothers on the court just as much as they are off it.

“I know what he’s going to do, he knows what I’m going to do,” Manny said, “so playing together, we don’t really talk much, we just play off each other.”

“We always stuck together, ever since we were little,” he added. “It’s a package deal.”

A package deal Gwynedd Mercy head coach John Baron is glad he made. Baron hasn’t had a lot of transfers during his 17-year tenure with the Griffins -- he estimates around a dozen -- but assistant Nick Burke brought in the twins for the 2016-17 season and the addition has paid its dividends.

Chris took a year to adjust to Division III, but the Lopez brothers now average around 15 minutes apiece and serve as the team’s defensive specialists. Though offensively limited, the pair are a valuable asset on the court for the Griffins.

“I give Chris so much credit. Chris barely played last year,” Baron said. “I’m really happy because they’re both playing equal minutes, happy for them as brothers and as seniors that they’re a part of something good.”

In their subtle way, the brothers showed their worth at the tail end of an 81-79 win at Neumann on Wednesday. With 16 seconds to go and a one-point lead, Baron subbed in Manny and Chris to deny Neumann over two final possessions, and they did just that, staying on top of their men as Gwynedd Mercy forced a turnover and an airball to close out the game.

“Our job specifically is just to go out there and guard the bigger dudes, guard the best dudes, and shut them down,” Chris said.

“Defensively they’re both really good,” Baron added. “Chris at 6-4, if we have a good bigger kid [facing us], that’s who we put him on...then Manny takes the guard/3-man and it’s a really good combo. I’m actually really worried about what we’re going to do to replace the two.”

Gwynedd Mercy is rolling this season, sitting at 19-5 overall and 14-3 in the CSAC following Wednesday’s win. They’ve locked up a top-two seed in the conference tournament with one regular season game to go, though they are unlikely to overtake Cabrini (21-3, 15-2).

The Griffins also have a shot to make the NCAA Tournament, either via the CSAC playoffs or an at-large bid, which is a possibility given their strong resume. They last made the tourney in 2015-16.

Heading into the postseason, Chris has started 10 of the team’s last 11 games after an injury bug hit, while Manny has steadily played double-digit minutes all year. The two will be very valuable over the Griffins’ run. They’re just enjoying the ride.

“A team like this, it’s really fun. It’s one hell of a ride,” Chris said. “Winning’s always fun and that’s the goal at the end of the day, just to keep winning, and hopefully we can end this year with a championship and make a good run to the playoff and to the postseason tournament. Start the end of senior year right.”

“My goal is to win a championship, man,” Manny added. “Go as far as I can in the tournament with my team, with all of us, and just win the CSAC championship and go to the NCAA tournament and then see what it takes from there.”

After this season, the next step is graduation for the Lopez brothers. If an opportunity opens up to keep playing ball, they would hop on it in an instant, but for the time being, they’re planning to work in sports management.

“I haven’t decided yet, but you might see me around Philly,” Manny said. “Philly’s a lovely place, lovely people, go Birds -- Wawa’s got the best cheesesteaks, I don’t care what anybody says.”

Whatever the case, they’re on each other’s side, and that’s been enough to get them this far, even 4,300 miles from home.

“That’s my best friend right there,” Chris said, gesturing toward his older brother, “and I wouldn’t change it for the world.”