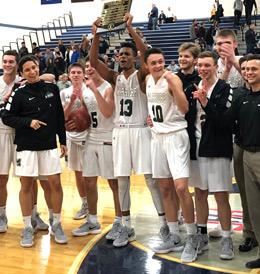 After one half of the Pioneer Athletic Conference championship game, Methacton held the lead, but there was still an uneasy feeling.

Despite leading Spring-Ford by six, the Warriors’ sharpshooting junior guard David Duda was struggling mightily from beyond the arc, missing shots he traditionally knocked down with ease.

As the Rams nipped at Methacton’s heels in third quarter, the momentum at Pottstown High School was beginning to change.

Duda’s confidence, however, was not shaken.

“I didn’t have a good shooting first half...I was awful,” Duda said. “At halftime, every single guy said keep shooting -- that’s not lying, every single one of them said it, coaches said it. When you have that kind of confidence, you are able to put your team on your back.”

The junior guard delivered 26 of his game-high 38 points in a memorable second half to lead Methacton to a 72-60 win and the Warriors’ third PAC title.

With Spring-Ford within three points midway through the third quarter of a game Methacton had led most of the way, Duda pushed the Warriors with a personal 13-2 run highlighted by three 3-pointers, which pushed his team’s advantage to 14 heading into the fourth quarter.

From there, his free-throw shooting took over, going 10-10 from the line and the Warriors were able to hold off a late Rams’ run fueled by forwards Noah Baker (24 points) and Austin Hokanson (23 points).

“One of the great things about David is he’s got a short memory, he’s not concerned if he’s missed the last shot, he missed a bunch of shots...but that’s not going to stop him,” Methacton head coach Jeff Derstine said. “He has a ton of confidence and he made some big shots in the second half, we were able to find him when he was open and hit massive free throws down the stretch.”

Derstine’s last PAC title came in 2015, on a night where Duda, then an eighth-grader, was in the stands watching as Methacton beat Pottsgrove.

Years later, Duda reflects on that night as the tone-setter and motivation for this team to go out and accomplish what those had done before them.

“I think all of us just kind of, we didn’t really speak, but we knew it was our goal at the time, when we get on the high school level and to accomplish that, it’s surreal,” Duda said.

Following the 2015 team, the Warriors lost seven seniors to graduation and brought back very little experience. The inexperience showed on the court as the Warriors went 6-16 in 2015-16.

That season, however, allowed then-sophomore Noah Kitaw to get his first chance to start on the varsity squad. It would be his first of three seasons as a key cog in the Warriors’ lineup, making him the longest tenured starter on the team.

Last season showed signs of progression back towards the top of the PAC, featuring a 14-12 season in which Methacton returned to both the PAC and district playoffs.

This season started slow, but the Warriors have caught fire as of late, winning their last seven games and now sitting at 18-7 on the season with the No. 10 seed in the district and a home district playoff game awaiting them.

Now a senior, Kitaw scored 11 points in the victory, capping off his PAC career in the best way possible. As a player who experienced the lows of losing basketball, Kitaw has a special appreciation for what it has taken for this Methacton team to win a title.

“It’s been everything,” Kitaw said. “Everyday, like in the offseason, I want to dedicate myself to getting better and getting in the gym and getting guys together in the gym so we can gel together and it shows what happens like this today when you keep going and when you keep practicing as a team.”

While Kitaw’s leadership has been more by example, Duda has done more of the vocal leadership role. The pair kept the Warriors together before they gelled together as a unit during their current run of success.

Aside from the captains, sophomore big man Jeff Woodward had himself a big night with 17 points and 19 rebounds. Junior guard Marcus Girardo also pulled down some key offensive rebounds down the stretch, cleaning up the glass for 12 total boards.

By out-rebounding the Rams 29-12 and making more free throws (17) than the Rams had attempts (12), the game almost mirrored their season, with everything coming together in the latter portion.

“I’m just incredibly proud of what our guys have accomplished this year. We kind of got off to a slow start, we knew we had talent on our team and it just has taken some time for everything to come together, but the second half of the season the guys have really gelled and [are] playing with a ton of confidence,” Derstine said. “I’m just really proud of the guys, incredible thing to experience, winning a championship, cutting the net down and I’m just excited for them.”

After coming out on top of the PAC, the Warriors cut down the nets and celebrated with pizza in the locker room. However, the celebration won’t last forever.

Without even finishing his slice, Kitaw already was focused on the continuation of this team’s journey on Friday night against PAC rival and No. 23 seeded Perkiomen Valley in the district playoffs.

“We have Perk Valley on Friday so short celebration, but we’ve got to get back on it tomorrow and make a run at districts,” Kitaw said.