"I'd do it all over again:" Gettysburg's Petrie retiring after 29 years 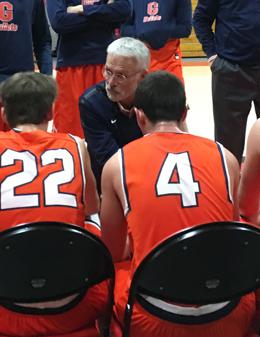 CARLISLE — Those who may genuinely believe George Petrie has lost his desire to compete and to teach basketball and to win games didn’t see him working the sidelines last week.

Not even six minutes had run off the clock and the 60-something skipper already had spent two timeouts, displaying a calm yet grandfatherly approach in an effort to settle down a jittery Gettysburg College squad that was out of sync early and several times lost track of the 30-second shot clock.

Petrie even spent a number of occasions squawking at the gentlemen sporting the vertically striped jerseys, working them when he thought they missed something or his team had been wronged.

Yet before a Centennial Conference scrap with nearby rival Dickinson finally came to a close at the spacious Kline Center — Gettysburg led 48-45 with 3:26 remaining in regulation yet wound up falling 63-51 in overtime — Petrie had his youthful Bullets on the cusp of a meaningful road victory.

Not so much meaningful because Petrie’s Bullets (6-16 overall, 4-11 Centennial) are trying to pin down one of the Centennial’s five postseason berths, but much more meaningful since the number of games Petrie will continue to work the Gettysburg coaching box are dwindling with time.

Late last week, in a press release disseminated by a highly acclaimed academic institution more than 185 years old that once housed wounded soldiers from both sides injured during the bloodiest battle of America’s Civil War, Petrie disclosed his intentions to retire from his coaching post.

Just three more games remain — two at Gettysburg’s Hen Bream Gymnasium against Muhlenberg and McDaniel and one more at Ursinus — before the winningest and longest-tenured basketball coach in Bullets history (395-346) will close out the last of his 29 seasons.

“As Grandma Nolt would say, ‘The family dinner is at such a time, can you make it George?’ Uh, no, Grandma, I can’t. They would try to work things around,” continued Petrie. “Now I won’t have to worry about that. I can enjoy those things and not go and leave.

“Those are important to the family, but there are other positives to it that you can enjoy.”

Yet while the suburban Philadelphia native is looking forward to retirement — Petrie grew up in Springfield and was a terrific player at Springfield-Delco before enjoying a Hall of Fame career at Lebanon Valley that earned him a look from the NBA’s Chicago Bulls — Petrie wouldn’t trade spending his adult life as a basketball coach for another type of professional career.

“I love what I do. I love it,” Petrie admitted. “My brother [former NBA all-star and front-office executive Geoff Petrie] was the same way. My sister [Paula] is the same way.

“I couldn’t think of doing anything else. It’s teaching, really.”

While Petrie spent one season coaching at Haverford High School, he moved up to the college ranks in 1973 as a two-year graduate assistant working under Bill Foster and Jerry Pimm at the University of Utah. Then, in 1975, he began a 14-year run as an assistant under Charlie Woollum at Bucknell.

With Petrie on staff, the Bison won four East Coast Conference regular-season championships, two postseason titles and made NCAA Tournament appearances in 1987 and 1989.

“I’ve worked with a lot of great coaches,” Petrie admitted.

Petrie relocated to Gettysburg in 1989, accepting the only collegiate head coaching post he’ll ever hold and the remarkably gratifying post he’ll relinquish in the not-so-distant future.

Since arriving at Gettysburg College, Petrie has piloted the Bullets to three Centennial Conference championships as well as 14 postseason appearances in the past 17 seasons.

Petrie also guided Gettysburg to five NCAA Division III Tournament appearances — the Bullets’ first two NCAA victories came in 2008 when GC finished 24-5 — and he’s taken the program to Europe five times. He could make a sixth in May, when the Bullets are scheduled to visit Italy.

“He’s one of the good ones,” Harrisburg-based referee Jim Bruno said prior to Wednesday’s game. “He usually leaves me alone, but he’ll get on me when he thinks he’s right and I need that.”

“Those were the coaches, along with Coach Petrie and Coach Robinson, some of us younger coaches came into the league and came under and learned a great deal from,” said Dickinson head coach Alan Seretti, who is in his ninth season fronting the Red Devils program. “You’re watching film and it’s like watching a clinic and you realize how much you don’t know.

“Sometimes, there’s so much beauty in the simplicity of the game,” added Seretti, whose club outscored Gettysburg 15-3 in overtime to prevail. “These guys, like Coach Petrie, that have been around and coached at a high level their teams are so efficient. Some people get lost in that and they don’t understand that. They don’t see a lot of the bells and whistles, because they don’t need to.

“They understand how to play the game the right way and they always have. So, it’s been a great learning experience competing against him year-in and year-out for the better part of a decade.”

Although Petrie’s lengthy coaching career featured who knows how many memorable highlights, there’ve been too many to just pick out one, two, even three. He’ll miss the game and the coaching camaraderie, but the wonderful relationships he’s cultivated with former players will continue.

“There’s this string that kind of goes through the whole time,” Petrie admitted. “Just a lot of good memories and a lot of good experiences. For me, one of the greatest things in my family, is I have an older brother that was extremely successful, I was successful — I believe — and my sister was. She had a great high school, college and post-college career.

“There’s three kids from a single-parent family that all went and got college degrees and all became successful because of the decision my mom [Dorothy] made when my dad passed away — to have a male figure around I think I’ll put them in sports,” Petrie continued. “She had no idea about the food, the injuries, the doctors, all the other things that came with it.”

The other part of his lengthy run as a college basketball coach that’s certainly not lost on Petrie is he was able to spend the past 43 years in his chosen profession not all that far from where he grew up in suburban Philly — while only relocating his family one time.

“We haven’t talked yet, but my message to him upon hearing the news would be, ‘Congratulations on an unbelievable career,’” Seretti stated. “To have an opportunity to stay in the game that long and leave on your terms and be able to live in an area of the country where you want to live and have an affinity for … not many of us would be able to do that.”

Yet Petrie was able to do that.

In a week or so, however, he’ll guide his Bullets for the final time.

“To me, it was always about the lifestyle,” Petrie said. “Not just for me, but the type of kids you’re going to be around and your family. To me, having been at Bucknell and a two-year stay at Utah, was great.