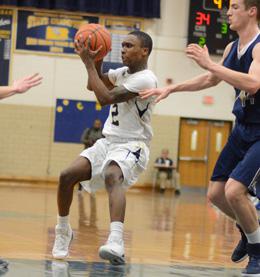 When Ahmad Bickley came to Cheltenham High School in 10th grade, he said he had no idea what he or his team could achieve.

Cheltenham was coming off an unremarkable 12-11 season and Bickley himself was just leaving an online school so he could play basketball in high school for the first time.

It wasn’t long before both began to see great improvement.

Cheltenham finished 16-7 in Bickley’s first season under head coach John Timms before last year’s 19-7 record that included a trip to the District 1 6A semifinals.

“When I went to Cheltenham my 10th grade year, everyone was asking me, ‘Why are you going to Cheltenham? What’s at Cheltenham?’” Bickley said by phone Saturday night. “And now it’s crazy, last year we went to Temple for the final four in districts and I didn’t even think we would go that far; when I went to this school, I didn’t think any of this would happen.”

And Bickley experienced incredible growth as well, leading to Saturday’s announcement that he will play basketball next year at Division II Chestnut Hill College.

“I hadn’t even thought about going to college on a full ride,” Bickley said. “It’s an amazing feeling. Even before I got the offer, I always wanted a scholarship just to know what it felt like. So when I got it, it was just a heavy moment for me.”

The 5-foot-9 point guard will join a Chestnut Hill program that has struggled lately, going 5-21 (2-17 Central Atlantic Collegiate Conference) last season and currently sits with a 4-18 (3-12 CACC) record. The Griffins are coached by Jesse Balcer, who has been their only coach since the program’s inception in 2003.

But Bickley is no stranger to starting something from scratch. And he is looking forward to the challenge of turning around a program.

“That’s one of the main reasons that I wanted to go there, to start something there and establish something because they haven’t won a lot but I feel like it’s a nice team over there,” Bickley said. “And I feel like I’m really that piece that’s going to pull everything together, facilitate, put people in the right places and score the basketball when needed.”

In addition to Chestnut Hill, his only scholarship offer, Bickley said he was also contacted by Clarion University, but felt it was an “easy decision” to commit and not wait on any other offers.

The sealing moment came last Wednesday when he took an official visit and met with the team. Bickley said the attitude and friendliness of the players and coaches drew him in.

“When I committed, the whole team texted me,” Bickley said. “It’s really like a big family there, so I felt welcomed already.”

Bickley said the coaches were the first indication of the type of environment he’d see at Chestnut Hill. Bickley said he met Balcer early this season, but he has known assistant coach Tommy Magnum for more than a year now. Bickley said Magnum has been a “great mentor” to him and helped make his decision an easy one.

“Sometimes we won’t even talk about basketball, he’d just call to check up on me to see if I’m good,” Bickley said. “So that’s why I really just knew. It’s like a family.”

Chestnut Hill, with 2,400 undergraduates, is a “perfect” size, Bickley said, especially being someone who describes himself as “not much of a party kid.” Bickley was also drawn to the fact that CHC is just a 15-minute drive from Cheltenham High School.

“Even when I go on vacation sometimes, I kind of want to go back home,” Bickley said. “So I can’t even imagine what it’s like going to college far away from home.

“It’s definitely still going to be an adjustment,” he added. “When you’re in college, you’re away from your family no matter how far away you are.”

Family was on Bickley’s mind when he made his commitment official. He said he was thrilled to go to school for free and keep the burden off his mother.

“Ever since I was younger, I saw my mom pay off college loans and talk to me about it,” Bickley said. “And over the summer, I told my mom that I was going to go to college for free. But my mom isn’t a typical basketball mom, she’s all about the academics. So she’s like, ‘Yeah that’s cool, but get your schoolwork done.’ And when they first offered me, she was so excited. So honestly, I’m the most happy for her.”

Bickley will also have a home connection at Chestnut Hill with freshman forward Trevonn Pitts, who played three years with Bickley at Cheltenham. With Pitts redshirting this season, Bickley will have the opportunity to play all four years with a high school teammate.

Bickley said he thinks he will play “right away” next season, especially with the graduation of senior point guard Demetrius Isaac.

Isaac, like Bickley an undersized lead guard at 5-8, started nine games his freshman year before starting every game in his sophomore and junior seasons. So far as a senior, the Penn Charter grad has been Chesnut Hill’s leading scorer (18.1 ppg), averaging 4.0 rpg and 4.2 apg as well.

Bickey, who said Isaac texted him a congratulations after his commitment, said he “really likes” Isaac’s game, but brings something else to the table himself.

“I don’t want to say he’s a score-first, but he really looks to score more than me,” Bickley said. “I’m more of a pass-first point guard. But I can definitely see how our games imitate each other’s.”

Bickley will come into his new school with lofty goals for his four years on the court. He said the plan for a team that has had just five conference wins in the last two seasons is to win a conference title.

He also has high expectations for himself.

“I don’t know the record yet, but I didn’t get a chance to break the all-time assist record at Cheltenham so I’ve gotta do it there” Bickley said. “I want to say I’m like 50 assists away from it at Cheltenham so I think I’ve got to go for that at Chestnut Hill.”