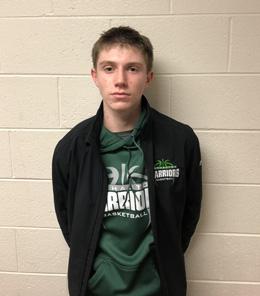 Sophomore guard Brett Eberly (above) has come on strong late in the season for Methacton. (Photo: Tyler Sandora/CoBL)

Ever since the members of Methacton’s core rotation were in middle school, they were watching the Warriors’ high school team play in championship games.

In the 2010-2011 season, Methacton lost to Pope John Paul II in the semifinals, but won the 2011-12 championship in a one-point game over Spring-Ford. The Warriors then went two years coming up short in the final game of the league, then won again in 2015 over Pottsgrove.

As middle schoolers, that bunch got to see some of Methacton’s best players play in a Warrior uniform. Brendan Casper, a current senior at St. Joe’s, was a senior on the 2012 team. On the 2015 squad, which made it to the second round of the PIAA 4A state tournament, were seniors Justin Ardman (Susquehanna), Tom Dyer, TJ Tornetta, and Sean Mann.

“We try to get these younger kids to come to games and watch them,” head coach Jeff Derstine said. “I think it’s really important what the four year run in the championship because the young kids want to be part of it.”

In the 2015-16 season, the Warriors didn’t qualify for the league’s playoffs, and last year they were the first team eliminated from the five-team field.

But after a 65-53 win over Upper Perk in the PAC’s semifinals on Friday night, the Warriors are back in the championship game. They will face Spring-Ford on Tuesday at Pottstown High for the title.

“Most of our team went to all of those games,” said Duda, a junior guard who scored 19 points in the victory, “and now we have the opportunity to do it ourselves. It’s awesome.”

Woodward scored 14 points, all of which came in the paint. Upper Perk had no answer for Woodward’s low post game, as the 6-foot-9, 245-pound big man had his way establishing position under the basket.

But it was 5-10 sophomore Brett Eberly who stole the show for the Warriors. Eberly, who spent last year on the JV squad, also scored 19 points, and hit five 3’s.

Eberly has found his groove the last few weeks of the year, scoring over 10 points in some recent games. While they might not be mind-blowing numbers, they’ve certainly exceeded Eberly’s expectations coming into this year.

Coming into the year, Derstine knew that all eyes would be on Duda and Woodward to do the majority of the production. Duda scores on average 18 points a game, and has nailed 70 3’s this year. Woodward, a 6-9 sophomore, averages a double-double with 12 points and 10 boards.

Add on top of that the fact that Duda is usually face-guarded on the wing and Woodward is often times denied the ball inside,

So the question Derstine and staff were asking themselves was, ‘who is going to be that third or fourth scorer?’

That person happened to be Eberly.

“He’s really progressed,” Derstine said. “He had an injury that kept him out for most of the offseason. It was a slow early going, but he’s gotten more and more confidence. He’s stepping up and playing well.”

When Eberly was still in middle school watching Methacton play in championship games, he admits he never truly thought about the possibility of doing the same, but now his, and his teammates dreams have come true.

“Didn’t think that at first, but looking back I probably could have made that assumption,” Eberly said.

Methacton has now won six straight games dating back to its loss at the hands of Norristown back on Jan. 26, and have won 12 of its last 14 games.

The Warriors finished the regular season ranked 11 in the unofficial PIAA 6A district one rankings, and Spring-Ford is number 10. Playoffs cannot affect these rankings.

“This is something that, in the beginning of the year, and before that, that they were dreaming about,” Derstine said.