Temple treks on with win over ECU 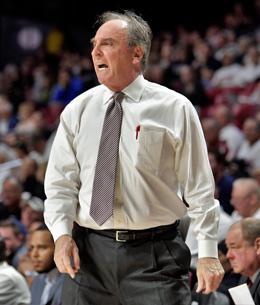 Fran Dunphy (above) has guided Temple to wins in seven of nine to get the Owls back on the bubble. (Photo: Josh Verlin/CoBL)

His team’s strong performance over the last month to follow five straight losses has brought the Owls back into the March Madness discussion; Temple has its work cut out to make it into the field of 68, but getting to the big dance is now in the picture.

Even as Temple’s climb back up to March relevancy is picking up steam, Dunphy says he’s focused on his team’s next game and that alone.

“We haven’t discussed desperation, we’ve discussed preparing for the next team, and that’s what we’ll continue to do,” he said. “You’ve got to win games at this point in time and we’re grateful for our run here, but there’s no assurances that it continues.”

Dunphy, in the midst of his 29th season as a Division I head coach, has to be aware that Temple is on the bubble. He can do the math.

After dispatching East Carolina 90-73 on Wednesday, the Owls have won four straight and six of their last seven games. At 14-10 and 6-6 in the AAC, and with wins over current top-25 teams Auburn, Clemson, and Wichita State, they have a good enough resume to qualify for an at-large bid if they close out the season nearly flawlessly.

“We know we dug ourselves out of the hole but we know we’re not out of it yet,” senior Josh Brown said. “We’ve got to keep plugging away, we know how hard it’s going to be, but we’ve got to just try our best to focus on the next game.”

Temple was focused enough to grind out the 17-point win over ECU at home, having six players score in double figures despite the absence of senior Obi Enechionyia, who was out with the flu. 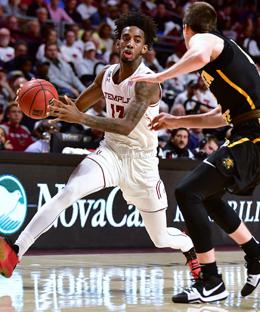 Quinton Rose had 23 points, including several highlight-reel slams to help Temple pull away in the second half. (Photo: Mark Jordan/CoBL)

After slamming home a Shizz Alston Jr. inbounds alley oop in the first half, the athletic sophomore knocked down a few jump shots to start the second and sparked Temple’s game-breaking run.

In the middle of a 12-0 swing which turned a one-point game into a 63-50 lead, Rose flew high to finish off an Alston alley oop from midcourt; just one possession later, he cut baseline and posterized Pirates forward Dimitrije Spasojevic to give the Owls a 12-point lead.

“Those were two big plays,” Rose said. “Shizz made two great passes to me and I just finished them off. I think it brought a lot of energy.”

Freshman forward J.P. Moorman II took over from there. The 6-7 North Carolina native closed the run with a free throw and scored all of his career-best 11 points from there, attacking the rim well and hitting a 3-pointer at the end of the shot clock with a minute left to secure the win for Temple.

Moorman also posted 12 rebounds, the most in a single game by any of the Owls this season, giving him two career highs and his first double-double.

“We’ve gotten great energy from the freshmen,” Dunphy said. “To get 12 rebounds in 25 minutes is pretty good. He’s got a great nose for the ball, he’s got great hands, when he gets the ball, typically he keeps the ball.”

Brown had eight rebounds to go along with 17 points, which tied his previous collegiate-best, while Alston ended up with seven assists on the day to complement his 14 points. Ernest Aflakpui had 10 points and seven rebounds and freshman Nate Pierre-Louis added 10 points to round out Temple’s double-digit scorers.

Temple took care of business in a game where they were expected to do just that, and they have a similar contest coming up at South Florida on Saturday. Like ECU, USF is a sub-300 team on KenPom.com and should be a gimme for Dunphy and the Owls.

The final five games of the schedule offer a few more opportunities for quality wins, including an away match at Wichita State and one at home versus Houston.

Opponents middle-of-the-pack or worse have been a struggle for Temple this season, however. Losses to La Salle, George Washington, and at home to Tulane are what has jeopardized the team’s tournament chances. The early-season wins over Auburn and Clemson have kept them alive to this point.

That’s why Dunphy wants to take it a game at a time.

“We are a team that has good stretches of basketball and we have to eliminate the not-so-goods,” he said. “What we’re talking about right now is what practice is going to be like in preparation for South Florida, and that’s the only thing we can worry about.”