Sakhniuk has found his place at Jefferson 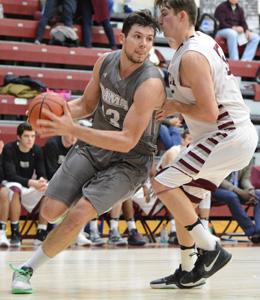 Yevgen Sakhniuk (above) has found a landing spot at Jefferson for his final collegiate season. (Photo: Josh Verlin/CoBL)

Yevgen Sakhniuk recalls it as a low time in his basketball career.

As a junior at La Salle University during the 2016-17 season, the 6-7, 235-pound forward was receiving little time coming off the bench for John Giannini’s Explorers while only averaging 1.1 ppg. He struggled to find consistency and was never able to make the same impact as he did as a sophomore when he averaged 6.1 ppg and played 13.5 minutes per contest.  Sakhniuk decided to make a change and transfer but he did not want to travel too far.

Giannini sent game film to Jefferson University head coach Herb Magee, who got a good glimpse into what the native of Kiev, Ukraine could do from a small sample. Sakhniuh found a spot where he could display the talent that once made him a mainstay in the Explorers rotation.

“I was looking for a place not too far and a place I could be productive and contribute to the team,” Sakhniuk said. “I figured if this team needed a big guy because they just graduated [Malcolm Gilbert] before me, I thought this was a good opportunity for me to show up and play for this school.”

Magee was impressed with what he was on tape and felt the young big man could be a nice addition to his program.

“John Giannini called me and said ‘I’m sending you the only tape we have on him,’” Magee said. “Then he came over and worked out. He was very impressive in the workout and he’s having a great year all around.”

Even before coming over to the U.S., Sakhniuk knew the style of play was going to be different but he already had an accomplished background. He was a member of Ukraine’s U-16, U-18 and U-20 national teams but it was what he did on the recruiting circuit against American high school programs that made him such an enticing prospect. While playing for Julian Betko, a former player at Butler who played in 103 consecutive games during his career, at Get Better Academy which is based in Prague, Sakhniuk avg. 16.0 ppg and 11.0 rebounds per game against U.S. high school programs in the winter of 2014.

As an 18-year-old in 2014, Sakhniuk appreciated how Betko prepared his players to be able to adapt to the American game and show things they still had to work on.

“He prepared us for the strength, speed and intensity of the American game,” Sakhniuk said. “I felt I was adjusted to that but I had to work on my defense and getting stronger.”

Giannini spoke with Sakhniuk afterward and offered him a scholarship. He sat out his freshman year due to serving an NCAA mandated year in residence. He began to come into his own as a sophomore but his inability to duplicate that type of play as junior caused him to look for another school.

“I played my sophomore year but barely played my junior year,” Sakhniuk said. “After that, I decided to transfer here.”

It didn’t take him long to become acclimated with Magee’s team as he scored 10 points, grabbed two rebounds and blocked one shot in the Rams (17-9, 12-3 Central Atlantic Collegiate Conference) first game of the season against Concordia (Cal.). He put together a string of five consecutive double-digit scoring games from Nov. 26 through Dec.9 and posted a career-high 26 points on Jan. 13 against Post University.

The senior forward is avg. 12.7 ppg and leads in the team in rebounding (8.0) and blocks (1.4). From the first time, he saw Sakhniuh on tape to eventually mentoring his young, talented post player in practice each day, Magee knew Sakhniuh could be special.

“He’s got good hands and can score inside,” Magee said. “He’s tough to guard. He commands attention and if you don’t double him he’s going to kill you. It opens other things up for us.”

That attention has led to scoring opportunities for freshman Alexander Gorton, who leads the team in scoring at 17.1 ppg, sophomore forward Prince Hickson, who had 18 points and nine boards in Jefferson’s 59-44 victory over University of the Sciences, point guard Kylan Guerra (11.7) and wingman Jason Bradanese (11.3).

Magee has found a multitude of ways to utilize Sakhniuh’s skillset by moving him all over the court. Sometimes he’ll be helping initiate the offense by setting a screen at the top of the key. The offense may go through him in the post and if a double comes it has opened up a lot for the fellow starters. He’s not much of a threat to hit the elbow or baseline jumper but he does move to each of those positions throughout the game depending on where the ball moves.

His head coach likes the fact that he can be moved around so frequently while still finding success.

“We don’t want to send someone just to the post to get them the ball,” Magee said. “We like to not just start him there but get him there by coming off ball screens to cause a problem then have him also roll to the basket. We’ve been doing that the whole year with him.”

Sakhniuh has taken to Magee’s coaching style and his maturation has been directly tied to what the Naismith Memorial Basketball Hall of Famer has been preaching to him.

“He has been saying go out, play strong and have fun,” Sakhniuh said. “He wants me to do what I have to do to help the team win. He gives me confidence so I just go out and play.”

Magee is hoping this isn’t Sakhniuh’s final year of playing college basketball as “we’re appealing to the NCAA for another year because he only played two years at La Salle” but if this is his last season, the senior forward will be going out on a high note.