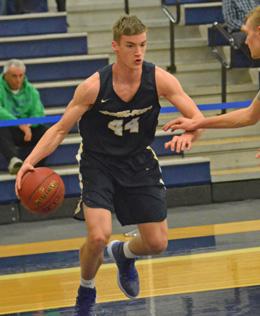 Early in the last offseason, Spring-Ford senior Austin Hokanson felt the best he ever had on the basketball court.

Fresh off his junior season in which Hokanson was named to the Pioneer Athletic Conference’s Liberty Division First Team and averaged 11.2 points per game, the 6-5 forward was poised to take the next step in his senior season.

But a broken bone in the bottom of Hokanson’s foot in July, coupled with a hip injury that kept him out from the middle of September until the first week of the season, derailed some of Hokanson’s big plans.

Spring-Ford head coach Chris Talley played it safe with Hokanson, easing him back into game action, but it was quite evident that his big man was not his normal self.

“He spent three months without playing, he didn’t have really much of an offseason, so basically when he was cleared to play, it was gametime,” Talley said. “That’s not easy to step right in and click on all cylinders.”

The frustration grew as Hokanson struggled early in the season to find his footing and couldn’t quite re-establish himself in his old role in the rotation.

The lack of progress took a toll on him mentally.

“[The struggling is] tough when you have a great summer like we did, we have, when the whole team is healthy, three losses all summer,” Hokanson said. “There’s a lot of success and then you get injured and you don’t have the start to the season, personally and as a team, that you want, it’s tough.”

For someone who expected to be playing at an all-league level, his own inconsistencies and shortcomings on the court were difficult to deal with.  Even as the season wore on, the senior forward had more than his fair share of difficult stretches.

However, if there was ever a place to find his old groove, the PAC playoffs would be an ideal location to get it back. Hokanson returned to form, pacing Spring-Ford to a 68-54 win over Phoenixville to move onto the PAC semifinals.

Entering Tuesday night, the Rams didn’t have three-year starter and senior guard Nestor Diaz due a sprained ankle. Without him, the guards looked slightly out of sync in the first half despite the Rams clinging to a 30-28 after the first 16 minutes.

Hokanson had a huge part in that, shooting 5-6 and scoring 11 of his 21 points in that first half and keeping the Rams on top. According to Talley, getting those early buckets and getting confidence in his shot are huge for Hokanson’s success late in games.

“He’s a rhythm player,” Talley said. “When he sees the ball go in early, it seems like his confidence, he stops thinking and starts playing once that ball goes in early.”

Despite being challenged by Phoenixville big man Brenden Jenkins, Hokanson was able to work himself down low and finish through a crowd multiple times. As Phoenixville transitioned to a zone to try to hold off Spring-Ford, Hokanson made defenders respect his midrange game by flashing to the high post and knocking down a jumper during the third quarter.

In that third quarter, Hokanson scored 10 points and lead the charge as the Rams outscored the Phantoms 24-11 to pull away for good.

This, however, is not the end goal. Hokanson and the rest of the Rams are well aware of the tradition that this program has had under Talley, especially with the recent runs to the championship game over the past two years.

After letting one title slip away against Perkiomen Valley last year, Hokanson knows he’s playing for another chance to bring a title back to Spring-Ford.

“I think it motivates us a lot, if you look at the program since Talley came to in and how successful they’ve been and have been in the playoffs every year,” Hokanson said. “We come out and don’t have the start to the season that we expect, that kind of pushes us because we don’t, having such a tough loss last year and having such a good group of returning players, we don’t want to jeopardize all the work we’ve put in.”

Hokanson will have a chance to get back to that championship game when the Rams face off against top seeded Norristown (16-6, 10-3 PAC).

For Methacton, this season has been about balancing expectations with inexperience as the Warriors have climbed near the top of the Pioneer Athletic Conference.

Sharpshooter David Duda, big man Jeff Woodward, and senior Noah Kitaw are the only three remaining players who played meaningful varsity minutes a year ago as members of a team that appeared in what was then known as the PAC Final Five, before the league expanded to six teams this postseason.

The Warriors got off to a slow start on the season, losing a number of close games and letting their inexperience show.

Nonetheless, as the second half of the season moves into the postseason, Methacton has flipped the script on the their December woes thanks to the leadership and play of Duda, Kitaw, and Woodward.

“It’s definitely been a bit of a struggle at the beginning of this year, but we’ve grown as a team and really coach [Jeff] Derstine has done a great job,” Duda said. “My fellow captain Noah, he’s one of two seniors, he just really tries to get everybody in the mindset of Methacton basketball and out program and how we play and it’s definitely shown the second half of the season.”

That strong second half of the season propelled the Warriors into the No. 3 seed in the PAC and earned themselves a date with Owen J. Roberts in the play-in round of the playoffs.

Duda’s scorching hot second half (15 points in the second half, 20 points overall) along with Woodward’s double-double (14 points and 20 rebounds) allowed Methacton to run past the Wildcats 56-34 and get them a matchup with Upper Perkiomen (14-7, 8-5 PAC) on Friday night.

While the final score indicates a dominant game, Owen J. Roberts had Methacton on the ropes, closing what was once a 14-point gap to just three points early in the third quarter. Methacton head coach Jeff Derstine called a timeout to gather his team together.

The Warriors would close the game on a 27-8 run, looking dominant with both Duda’s shooting and Woodward’s inside game working at once. The pair was in sync and were reaping the rewards of having worked together for year.

“We play on the same AAU program,” Duda said. “We’ve been playing together for awhile, having him last year as a freshman, me as a sophomore, and getting great leadership from our captains last year, we’ve just tried to carry it on and improve as we go along. Jeff’s done a great job improving from the beginning of the season to the end of the season.”

As Woodward continues to grow as a player, so does this Methacton team as it is putting together an impressive stretch of basketball.

Beyond Duda and Woodward, players like sophomore guard Brett Eberly, who knocked down three three-pointers in the first quarter on Tuesday night, and junior guard Marcus Girardo, who pulled down nine rebounds, continue to step up.

Now that players like Eberly and Girardo experience, Methacton may be exceeding expectations very soon, but for now the focus is one game at a time.

“That’s five in a row right now. We’re clicking right now,” Derstine said. “I think our guys have been doing a good job of enjoying the victory, but coming back the next day focused and ready to go.”