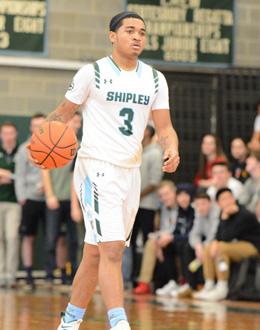 Sam Sessoms didn’t think that scoring his 2,000th career point was going to be that big of a deal.

That was, until the Shipley School senior took the court for a Friends’ League semifinal matchup on Tuesday afternoon. And suddenly, the meaning of the day took over.

Not surprisingly, it didn’t take the 5-foot-11 guard very long to accomplish the feat. After missing his first three shots, Sessoms started to settle down, scoring seven of the 11 necessary points in the first quarter and hitting the benchmark early in the second, on a floater in the lane. After a brief timeout to honor the achievement, Sessoms got right back to work, scoring the rest of his game-high 37 points to lead the Gators to a 55-42 win over the Phoenix.

“I know there’s not too many men in the history of Philadelphia high school basketball to put their name alongside the 2,000-point column, and those who did I’m pretty sure are great,” Sessoms said. “I’m just happy I'm able to put my name next to theirs.”

Locally, Sessoms joins those like Kobe Bryant (2,883 at Lower Merion), Maureese Rice (2,601 at Strawberry Mansion), Wilt Chamberlain (2,252 at Overbrook), Wayne Ellington (2,211 at Episcopal Academy), Dalton Pepper (2,207 at Pennsbury) and several others who have gotten to the benchmark, though nobody’s accomplished the feat since Maurice Watson (2,356) did so in 2012 at Boys’ Latin.

The Binghamton-bound guard has seen it coming for some time, even though he only scored 232 points as a freshman as the team’s sixth man.

Going into his sophomore year, he still told Shipley coach Phil D’Ambrosio that he was going to make it happen. And he did, scoring 550 points as a sophomore and 620 as a junior to put himself in striking distance.

Sessoms missed three games earlier this year with an MCL sprain but made up for lost time with a 55-point game, another 40-point outing and numerous 30-point contests.

“It’s a helluva feat, honestly,” D’Ambrosio said. “He’s been very consistent, but my thing is, it doesn’t surprise me in the least, I know who he is, he’s a hungry kid. He set out to accomplish it early on in his high school years, and to his credit, it came to fruition.”

Sessoms has carried the Shipley offense ever since moving into the starting lineup as a sophomore, and that was no different to get his team past Friends’ Central. The shifty lead guard had 22 of his team’s 24 points as the Gators held a five-point advantage at the break; nobody else on the team hit a shot until junior wing Chaz Owens’ layup to open the third quarter.

Friends’ Central was led by 11 points from senior Toure Mosley-Banks, plus nine from sophomore Mason Mosley and eight from junior wing Myles Robinson.

Before Shipley plays Kiski Prep in the first round of the Pennsylvania Independent School (PAISAA) state tournament next week, one major task awaits the Gators.

That doesn’t stop Sessoms for a second from his typically self-assured viewpoint.

“Oh, we’re going to win. Yeah, we’re going to win,” he said. “I’ve done a lot of great things at Shipley, [but] one thing I’ve never done is bring this school a Friends’ League championship so they can hang it in here. That’s something I definitely want to check off my checklist, and Westtown’s always been in the way.

“I just want to play the best game i’ve played in a Shipley uniform and bring this school a championship.”