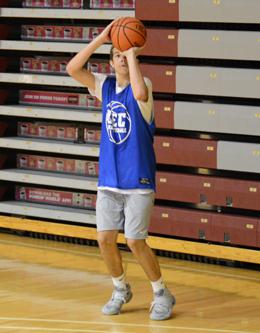 For Eric Esposito, the writing was on the wall.

His senior season at Conwell-Egan was coming to a close, the Eagles with four games left in the regular season and only a slim chance of making it to the Catholic League playoffs. And though several Division II schools were in touch, only one had offered a full scholarship to the Langhorne (Pa.) native before the season even began and then recruited him hard all year long.

So Esposito told his parents on Wednesday morning that he was ready to make his college choice, then hit up Holy Family head coach R.C. Kehoe and gave him the good news.

The 6-foot-5 left-hander, a 3-point specialist who’s learning to score in other ways, became the second Catholic League senior to decide on the Tigers in the last week, following up on Neumann-Goretti guard Dymir Montague.

“They liked me a lot, they like how I can shoot the ball and stretch the floor and I think I fit their style,” Esposito said. “So I think it’s good for me.

“[Kehoe] was excited, he was just saying welcome to the family and all, that he’s excited for what the next four years brings.”

Dalessandro and Esposito had stayed in touch in the two years since the 6-foot-8 forward graduated from the Fairless Hills (Pa.) Catholic school. In fact, Esposito said that when found out that Dalessandro was transferring colleges, he told his former high school teammate to take a look at Holy Family.

The response from Dalessandro was a photo of HFU’s Northeastern Philadelphia campus, where he was taking a tour that very moment. After his transfer decision was final, Dalessandro and Esposito started talking again about the possibility of being teammates.

“He was just saying that it would be fun to play again together, since I played sophomore year with him when he was a senior, and it was fun,” Esposito said. “So just getting back, now we’re both better than we were then, that it’d probably be more fun this time around.”

Esposito also has experience being teammates with Montague, a 6-3 scoring guard who’s enjoying a terrific senior season for the Saints. The two spent the summer with the Hoopdreamz AAU program, taking a brief break from being Catholic League rivals to learn how to win together.

All three will be counted on next year to help turn around a Holy Family program that’s struggling only two years removed from hosting the NCAA Tournament regional after a 26-win season. So far this year, the Tigers are just 2-18, including 1-11 in CACC play; they haven’t won a single game at home (0-10). It’s a young team, with only three juniors and no seniors, led by freshman Terrell Jones (14.8 ppg/5.5 rpg) and sophomore Maliq Sanders (13.0 ppg/5.8 rpg).

“[Kehoe] was saying to me that he wanted Philly guys, he said that he wants guys from the Catholic League and the Pub because he knows Philly guys have a certain grit and toughness to them, which is something he wants for his team,” Esposito said. “And I thought it was cool that he thought of us like that.”

The second-leading scorer (16.9 ppg) on a Conwell-Egan squad that sits at 6-11 overall this season and 1-8 in the Catholic League, Esposito is a solid-bodied wing guard with range out to the NBA 3-point arc, and he also has a decent post-up game which he can use to operate from the mid-range. He’ll have to work on his ball skills at the next level and his lateral speed, but his size and shooting ability alone will make him a valuable asset for a Tigers program which relies exclusively on a 2-3 zone and loves to shoot the ball.

“What (Kehoe) stressed on the most...was I’ve got to get my body a little bigger, get in the weight room more and get my quickness up,” Esposito said, “but he said he trusts me to get there because I’ve got a strong work ethic. He’s got confidence in me, and I’ve got to prove him right.”

Eric is the second of four children in the Esposito household, and both younger brothers -- Evan, 13, and Shane, 10 -- are following in his path as basketball players; an older sister, Sarah (21), is a student at Jefferson. It wasn’t lost on the oldest boy that his accomplishments have had quite an impact on his younger siblings.

“I think I set a pretty solid example,” he said, “but I’m hoping they’ll be even better than me.”