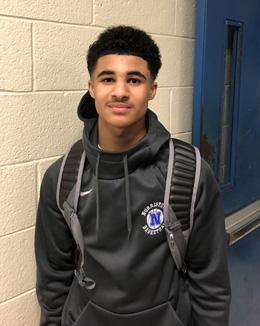 Tyler Lyons (above) was part of a key Norristown run that led to Friday night's win over Methacton. (Photo: Tyler Sandora/CoBL)

The players took care of that.

“[He said] no words,” junior Mickeel Allen said. “Just that mental click. We knew what we did wrong and were going to fix it.”

That is a testament to the standard on defense the Eagles have become accustomed to -- one they didn’t posses when Methacton handed them their only division loss on a buzzer beater back on December 21. Since the calendar flipped to 2018, the Eagles have begun to play their best defense of the year.

In recent games, they have held Owen J. Roberts to 34 points, Great Valley to 35 points, and Spring-Ford to 35. Entering Friday night’s game, the Eagles were allowing, on average, only 46.2 points per game this season.

“We are a defensive-minded team,” Johnson said. “Once we learned all of our shifts and defense assignments, I knew we would be a different team in January. We used the first eight or nine games to look at each other and see what players could do. Now we put them in position to be in position.”

Vernon “Man-Man” Tubbs led the Eagles with 12 points, to go along with some flashy moves with the ball. Junior Marcus Sanford had eight, as did 6-7 senior Darius Hopewell and Allen, a 6-4 junior. Allen also ripped down 10 rebounds.

When the Eagles did come out in the second half, they were immediately in attack mode.

Norristown went on a 9-0 run to start the third, sparked by two 3-pointers from junior Tyler Lyons. On the defensive end, Methacton didn’t get on the board until Norristown had claimed a five-point lead. The Eagles’ full-court pressure and non-stop harassment on the defensive end led to easy layups and heavy momentum shifts back to the Norristown bench.

In the first half of the year, Norristown was still adjusting to the coaching styles of Johnson, who took over the program just weeks before practices began. In those early practices,

Johnson was constantly preaching the principles of the structured up-tempo style the Eagles use on defense.

Now that the players have learned and adapted to the new system, things are clicking; and Johnson has taken a step back to let his players do their thing.

“They are figuring out what we are talking about,” Johnson said. “With our up-tempo defensive style and what it is, and different trap areas. Now that we’ve been doing it for over two months, they are starting to see it. When we are in film sessions, they are instructing each other about what we should be doing.”

“Beginning of the year, we would have spurts of energy, but now we have it going 32 minutes a game,” Allen said on the defensive efforts of his team. “It’s a motor that keeps going. Coming from last year to this year, is like a big step up. We worked hard in the little amount of time, and it’s great and we’re just going to keep getting better.”

That level of comfortability on the defensive end has grown with the success of the team. Since the new year, the Eagles (12-5, 6-1) have only lost one game; a 57-52 loss to Pottsgrove.

Norristown’s up-tempo style can be difficult to adapt to, and you need everyone to be on the same page about communication and keeping the same energy level. Even though Johnson is still in his first year, the team seems to have adjusted fairly quickly.

“Half our practice is defense,” Johnson said. “We spend so much time on it, so they know how to structurally trap and play a man. How to get guys to corners to get stops and have guys pick up their dribble. It’s all about philosophies, and carrying them out.

“It’s not just one guy stopping somebody, we’re a whole team.”

Norristown now holds the No. 9 seed in the unofficial PIAA 6A District One rankings. The remaining schedule will be a test for the Eagles, as they host West Chester Rustin on Saturday, and close out the conference schedule by visiting both Spring-Ford and Perkiomen Valley next week.

Now that Norristown has its defensive mindset figured out, it’s now about improving upon it, and making the strides to find new ways to improve; while winning at the same time.

“I can’t wait until we can get to the next stage and become a great defensive team,” Johnson said. “It’s a mentality. Once you get that mentality an mix it with the effort, it makes for a great combination.”