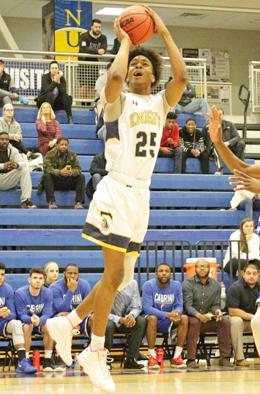 It had been just five days since Cabrini and Neumann last played each other.

The Cavs handed the Knights a 29-point beating when the two teams met at Cabrini last Wednesday.

While Neumann had a win against Clarks Summit between the two contests againg their Colonial States Athletic Conference rivals, the loss was still fresh in the Knights’ minds heading into Monday night’s game at the Mirenda Center.

“We watched film on our game on Wednesday, and we just thought we were pretty soft that game,” Neumann coach Jim Rullo said. “We didn’t challenge, we didn’t contest, we had no urgency. We had no accountability, and we’re a team that requires that attention to detail. We’re a team that if we’re not making the 50-50 plays and getting on the floor, we’re just average.”

The tone was set early on. Neumann wasn’t going to let the same thing happen again.

Just more than a minute into the game, Neumann freshman forward Aaron Johnson-Chavis knocked the ball away from Cabrini senior Tyheim Monroe and dove on the floor to force the turnover. The energy and intensity for the Knights persisted for the next 39 minutes.

“If we do all those things that you talk about, then we get some separation,” Rullo said. “And I think we play better in those atmospheres because I think it’s contagious. That’s what we preach. That’s what we’ve done for five years and we’ll continue to do that. It takes a very special, selfless player to buy into that, and I’m blessed to have a nice group of them.”

On Monday night Johnson-Chavis was able to match the play of the upperclassmen. Both players scored 23 points, but Johnson-Chavis is the one who made big plays down stretch to get the upper hand in the matchup.

Neumann led by as many as 14 points, as late as the five-minute, 44-second mark in the second half. Due to some clock mismanagement and costly turnovers by the Knights, Cabrini cut the lead to two with 59 seconds left after a three by freshman DJ Smith and a layup by sophomore Keith Blassingale. If Cabrini could get a stop, it had a chance to tie the game or even take the lead.

Instead, Johnson-Chavis finished for a basket inside to put Neumann up by four. Cabrini made it a three-point game and had another chance to tie, but the Cavs missed a decent look from three and Johnson-Chavis grabbed one of his 13 rebounds. After he was fouled, he knocked down two free throws with 14 seconds left to put the game out of reach.

“With his length and athleticism, I think he possess an ability to get to the rim, and that was one of the things we looked at from Wednesday night,” Rullo said. “I think Cabrini, you don’t want to settle and take quick shots. I think you want to make them play defense and make them work and try to take high percentage shots and fortunately for us he was the recipient and he executed down the stretch for us.”

Rullo described the annual contests with Cabrini as a “tremendous rivalry.” Monday’s contest was the fourth time in the teams’ past seven meetings the game was decided by single digits.

Unfortunately, tensions ran hot after this one when what was a very entertaining game ended in a postgame dustup.

It is unclear how it started, but the postgame handshake lines turned into a heated exchange involving players and coaches. Luckily, the two teams were separated quickly and hurried off the court before anything too serious could happen.

“It’s just unfortunate to be honest with you.” Rullo said. “I don’t know the details around it...I think it’s obviously a very competitive game. I think there’s a lot of talent on the floor. Again it’s an unfortunate situation. It shouldn’t have happened.”