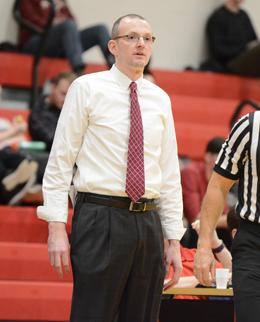 Pat Doherty (above) is in his first year as Haverford College's head coach. (Photo: Josh Verlin/CoBL)

Of the six candidates who made it far enough in the interview process for the Haverford College men’s basketball head coaching job to meet with the team, Pat Doherty did something to set himself apart, according to junior Joe Scibelli.

Doherty went through all the usual points that potential coaches hit -- his background, his coaching style, his expectations for what he could do with a program whose reputation has been a good deal behind that of the school’s elite academics.

Then, he told the Fords how he would beat them.

“He actually scouted us and he told us how he would guard us if he was coaching against us,” Scibelli said, “and we thought that was a neat way to separate himself from the rest of the pack. And it really stuck with me.”

So instead of potentially scouting against Haverford College, Doherty is now doing all he can to help the Fords be as competitive as possible in the Centennial Conference, no easy task for a team that’s coming off consecutive four-win seasons.

But though he came to Haverford with eight years as a Division I assistant at Lafayette, Doherty didn’t hit his new team with all sorts of fancy D-I tricks or new, complex drills. Instead, it was exactly the opposite: how to throw a proper chest pass, how to post up and throw a post entry pass, proper footwork coming off screens. It was like middle-school hoops all over again, and not just for one or two workouts.

“I had a feeling there was going to be a lot of fundamentals,” Scibelli said, “but it was a lot more than I anticipated.”

Doherty was making a point -- successful teams do everything right, no matter how big or how small.

So Haverford spent the preseason working on the basics. From a big-picture standpoint, two points where continually emphasized: ball movement and defense.

“This year was way more structured and practices were very structured down to the minute,” junior guard Kahlil Garnes said. “(Doherty) said you can’t play if you don’t move the ball and you don’t play defense.”

Slowly, the Fords are starting to figure it out.

With eight games left in the season, Haverford (6-11) has already bettered its previous two seasons and matched the one three years ago; the Fords haven’t won more than 10 games in a season since 2011-12, also the last year they were above .500 at 14-12. That included two wins in the NYU tournament to briefly move above .500 three games into the season, as well as non-league victories over Bryn Athyn and Penn State-Brandywine and conference wins over McDaniel and Washington.

“The way we played at the NYU tournament, I think it really helped with our buy-in,” Doherty said. “Our guys saw if we commit to playing a certain way, we can have success. It hasn’t resulted in success against some of the teams in our league, but we are making progress. 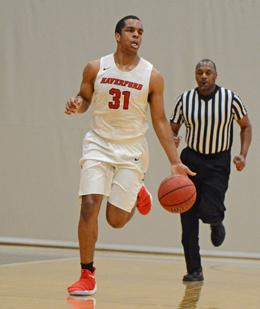 Kahlil Garnes (above) is one of two juniors who are leading the Fords in scoring this year. (Photo: Josh Verlin/CoBL)

There’s clearly still a good deal of work to be done for Haverford to catch up with the top dogs in the Centennial -- namely, Swarthmore, Franklin & Marshall and Johns Hopkins. But they showed this past week that progress is being made.

Over the span of four days, Haverford hosted both Swat and F&M, currently first and tied for second (with Ursinus) in the league, respectively at its on-campus Gooding Arena. And no, the Fords weren’t able to beat either the national No. 15 Garnet or No. 21 Diplomats, who are a combined 29-5 this season. They did, however, play defend and share the ball.

In taking Swarthmore to overtime on Wednesday in what became a 65-60 Garnet win, the Fords collected 16 assists on 22 baskets, while holding their visitors to their lowest point total of the season on 35.6 percent shooting. F&M didn’t need overtime to come out with a 79-68 win, but it was 27 turnovers against the Diplomat press that did in Haverford, which also had 17 assists on 23 made baskets and held F&M under 50 percent shooting despite all the giveaways.

“We’ve made progress in a lot of important areas...I think the guys are slowly but surely getting more organized, they understand what we’re trying to do,” Doherty said after the Swarthmore loss. “The gap in talent is marginal, it’s just about how connected you are as a team. And we’re getting there, but we have a lot more work to do.”

“I think we’ve had moral victories all year so far, and our record is still 6-11,” Garnes said. “So we need to start getting real victories at this point.”

The good news for Doherty and the Fords as they try to work their way up the Centennial ladder is that most of the talent on the roster will be around for at least one more season, if not more. The team’s two leading scorers, Scibelli (13.2 ppg/5.9 rpg) and Garnes (12.7 ppg/2.8 rpg), are both juniors; its other double-figure scorer, Jonathan Lang (12.0 ppg), is a sophomore.

Turkson, a product of Julia Masterman HS in Philadelphia, is the only Pennsylvania native on the roster; the rest of the Fords hail from as far away as Scibelli's hometown of Charlotte (N.C.) to Seattle, Wash. (Lang) and Los Altos, Cali. (freshman Josh Radin).

Despite Haverford’s rigorous academics -- it’s routinely considered among the top 10 liberal arts colleges in the country -- it’s not impossible for the Fords to find success on the hoops court. They only need look at Swarthmore, which went from a hoops afterthought to one of the Centennial’s best over the course of Landry Kosmalski’s first five years as head coach.

When Kosmalski, a former Davidson assistant, took over the Garnet in 2012, he was assuming control of a program that had one just three games the year before. Last season, they won 23 games, including the Centennial championship as well as the program’s first-ever NCAA Tournament competition.