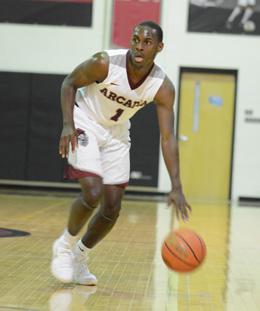 Da'kquan Davis (above) has become a standout in his freshman year at Arcadia. (Photo: Josh Verlin/CoBL)

When Arcadia head coach Justin Scott recruited Da’Kquan Davis out of Roman Catholic High School, he knew the Philly native would come to campus ready to play as a freshman.

What he didn’t expect was Davis’ ability to run a team, or that he would do it so soon.

Coming out of the Philly Catholic League after playing an integral part in two PCL and state championships, it was clear that Davis was a solid, promising player, bred from an elite program.

Being surrounded by high-level players at Roman clearly bolstered Davis’ development, but it wasn’t until he came out from the shadows of those stars that the portrait of his potential was truly visible.

Mostly a 3-point shooting specialist at Roman, Davis has quickly blossomed into one of Arcadia’s best players, doing everything from running his team’s offense to scoring in all sorts of ways.

“I didn’t necessarily know he would be a point guard watching him in high school because as an underclassman, they had Tony Carr, who’s starting at Penn State right now,” Scott said. “Then last year, Lynn Greer Jr., who’s a sophomore but is gonna be a big time player, they put the ball in his hands as a freshman.”

Davis began his basketball career at Roman playing on the freshman team, just another ninth grader at the Broad & Vine institution with hoop dreams. But he caught the eye of then-Cahillites coach Chris McNesby, who brought the sharpshooting guard up to the varsity team as a sophomore. After growing his skills that year, Davis realized that college hoops was a possibility for him during his junior year.

The 6-foot-1 guard began hearing from colleges at all levels, from low-level Division I down to Division III. After seeing Arcadia coaches and players at his games throughout his last two seasons at Roman, Davis decided to make the Alumni Gymnasium his new home.

But his college career would have to wait.

Davis got a concussion during the team’s exhibition game against Drexel in November and was sidelined for a week, missing the first two games of the season.

His confidence started to build back on Nov. 25, in a game against Lewis & Clark College, Arcadia’s fourth of the year but only Davis’ second. The freshman scored 19 points, shooting 7-of-12 from the field and 3-for-5 from beyond the arc. With confidence playing a huge role in his game, Davis said early success in his debut marked a kind of realization of the role he could play at Arcadia:

Davis said his goal coming into his freshman year was to land a starting position. He accomplished that, having been in the starting lineup for all but one of his 15 appearances so far this season.

But he’s become much more than just a starter for Justin Scott’s Knights.

After Arcadia’s win over Widener on Wednesday night in which he scored a game-high 22 points, Davis is averaging 15.5 points per game. Over his last nine games, where he’s collected all five of his 20-plus-point outings this year -- including a 32-point outburst against Lebanon Valley -- Davis’ average is 19.6 ppg.

He’s a bona-fide go-to-scorer for the Knights who’s able to rebound efficiently (4.5/game) and facilitate well among teammates (2.7 apg).

“I would say that freshman year [at Roman], I didn’t really have the mindset that I have now of working out everyday, getting shots up, staying in the weight room, getting stronger, eating the right things, getting to sleep on time and things like,” Davis said.

“Once I realized that I could get to the next level and play at the next level, I really started taking it more seriously on and off the court.”

Junior Josh Scott began his time at Arcadia in a very similar way that Davis has. Named the MAC Commonwealth and City of Basketball Love’s Rookie of the Year for the 2015-16 season, the Penn Wood grad -- no relation to his coach -- has maintained the momentum he built as a freshman, averaging 13.3 points-per-game so far this season; he flirted with a triple-double in the Widener win, finishing with 11 points, 11 rebounds and nine assists.

Scott said he and Davis clicked on the freshman’s first visit to campus and the two have become even closer now as teammates.

“That’s really like my little brother. I see so much in him that I see in myself but I want him to be better than me. I want him to break every record, I want him to do everything because he has it in him,” Scott said. “I try to tell him everything that I learned so he learns it from year one, not year two or year three.”

At his current pace, Davis is on track to score well over 1,000 points in his four years at Arcadia; he’s already at 233 with nine games left in the regular season. Only nine Knights players have surpassed the 1,000 point mark (Scott will become the 10th either later this season or early in his senior year); none have scored more than Orick Smith’s 1,542 (1993-97).

Scott noticed a change in his own game when he began listening to his teammates more and focusing on learning from them, a lesson that Davis clearly clear incorporated as a core foundation to his game.

While it’s echoed by his current teammate in Scott, the humbling nature of Davis’ character may have been solidified by the culture of his Roman team. Even though he was on a team that included current Penn State stars Tony Carr and Lamar Stevens, plus high-major prospects like Seth Lundy and Lynn Greer III, and a few other current/future Division I players as well, Davis never felt excluded.

“Those guys were always going to a higher level but they never talked to me as if they were higher than me, they always talked to me like we’re on the same level,” Davis said.

Though Arcadia might not be on the same level as the Big Ten, Davis is showing he’s come a long way from that high school freshman who could shoot 3-pointers

Just like Carr, Stevens and the rest, he can be a star, too.

“Mentally, I feel like I have the ability,” Davis said. “I have the strengths, I have the smarts to lead this team to victory and just get us to where we want to be.”