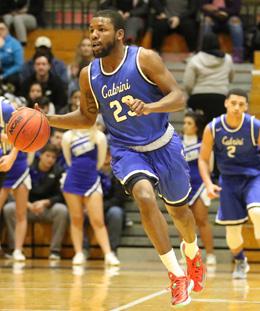 Deryl Bagwell (above) picked up his first career triple-double to help power Cabrini past Neumann on Wednesday. (Photo: Tommy Smith/CoBL)

Deryl Bagwell has had his sights set on a triple-double for quite some time.

The Cabrini guard watched in 2014-15, a season which he redshirted due to injury, as teammate and National Player of the Year Aaron Walton-Moss led the nation with nine triple-doubles.

“I can do that,” Bagwell thought to himself at the time.

The following year, the Philadelphia native and Imhotep Charter product got a third of the way there, averaging 13.7 ppg and reaching nine rebounds during one game. So he had the points down.

Next came the rebounding. As a redshirt-junior last season, Bagwell averaged 6.6 rpg, enough to record five double-doubles of points and boards to his name. And, stepping in place of injured point guard Ivan Robinson, he got a taste of the assists as well, dropping as many as nine dimes in a game against Immaculata.

On Wednesday night, he finally put together the final piece of the puzzle.

With Robinson again out due to a torn ACL, Bagwell made his second straight start at point guard, and he finally broke double-digit assists, picking up his tenth with two minutes to go in a 105-76 win over CSAC challenger Neumann.

Bagwell finished the day with 19 points, 17 rebounds, and 10 assists -- his first career triple-double.

“I felt like Aaron [Walton-Moss] when he used to get triple-doubles,” Bagwell said. “I’ve never had one in my life so I always wanted to get one. I was always close to one, but when I got it, I was so happy.

“That was one of my goals I wanted to do before I graduate this year, so I got it. I’m happy.”

The team was clearly happy to get him there as well. At the four-minute mark of the second half, the win all but secured, Cavaliers coach Tim McDonald pulled Bagwell aside to let him know he needed just two more assists to reach a triple-double.

With his teammates doing whatever they could to help him achieve the triple-double, Bagwell found D.J. Smith on a drive-and-kick and then hit Tyheim Monroe in the corner two possessions later to cross off assist number 10.

“He’s a big stats guy at the end of games,” McDonald said. “Luckily, he doesn’t talk about it during the game, he doesn’t check it at halftime or anything like that, but after the game he wants to see what they accomplished that way so I’m glad he got that tonight.”

Any stats guy would also notice the fact that Bagwell -- generously listed as a 5-11 “forward” on the team roster -- grabbed 17 rebounds. That’s seven more than the 6-7 Monroe, who came in leading the nation with 17 boards a game.

With the Knights double-teaming Monroe, who still finished with a healthy 27 points and 10 rebounds, Bagwell tracked down seemingly all the loose balls on Cabrini’s end, nearly doubling his per-contest average of 9.3 rebounds; he also averages 12.0 ppg and 4.7 apg for the Cavaliers.

None of this came as a shock to McDonald, who has seen Bagwell regularly battle Monroe under the glass during practices. 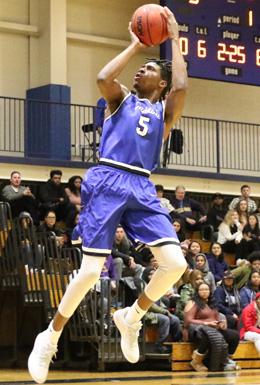 Tyheim Monroe (above), the nation's leading rebounder, is a nice challenge for Bagwell in practice. (Photo: Tommy Smith/CoBL)

“It’s funny at practice sometimes, when he and Tyheim are on the same team and they’re ripping the ball out of each other’s hands, really competing for rebounds,” McDonald said. “He’s just so tough and a competitor that it doesn’t matter if he’s guarding someone 6-7, he’s going to do the work that he needs to do, and he’s just relentless going after rebounds.”

“I’m a magnet to the ball. If Tyheim’s not going to grab it, I’ll grab it,” Bagwell added. “He usually gets all the boards, so when he’s not getting the boards, I’ll get them. That’s just how it is.”

Bagwell said he tries to channel his inner Ben Wallace on the court, referencing the four-time NBA All-Star’s grit and determination, despite being undersized as a 6-9 center.

Part of that grittiness comes from Bagwell’s high school days at Imhotep Charter, where he spent his freshman and senior seasons playing alongside Division I talent. In between, he played at Northeast High, where he was “the man;” but at Imhotep, he learned to compete against the best and find his niche in a crowded rotation.

“Coach Tahar [Sutton], coach Andre [Noble], coach Floyd [Butler], they put that in me, like I’ve got to be gritty, I’ve got to be tough, can’t let opponents see any weaknesses,” Bagwell said.

That’s proved to be a useful skill at Cabrini, where offensive menaces in Monroe and sophomore Keith Blassingale are the first two scoring options. Bagwell is perfectly happy as a role player as long as the team is winning games.

A lightning-fast, five-tool player, Bagwell possesses a driving ability that really complements the sharpshooting habits of Blassingale and other teammates.

The drive-and-kick has become an integral part of Bagwell’s game, especially since he’s been tasked with learning the point guard position from scratch in Robinson’s absence. He’s picked up the position in stride.

Whereas he would shoot at almost any opportunity as an underclassman, he is now a very reserved floor general and team leader, calling out the defense’s different looks and communicating with McDonald to set up the right offensive plays.

“Ivan (Robinson)’s my go-to guy, he’s the heart and soul of our team, so a lot of times I don’t have to call it, Ivan looks at me and knows what I’m going to say. With Deryl, we’ve really been working on that in practice, making sure we make eye contact every time there’s a stoppage, make a call, and he’s really embraced that, and to his credit, he’s picked up what we’re doing to a T,” McDonald said. “He’s really stepped into that role and exceeded my expectations for him at that role, especially since it’s only the second game that he’s been there.”

After sitting out four games due to academic reasons and on-court issues with McDonald, Bagwell is hungry as ever, having found a new spark on and off the court in the first few games of 2018.

“I think taking away basketball from him really shocked his system and since he missed four games for us, he has become the best player at practice, the best leader at practice,” McDonald said. “He has really transformed into a team-first guy and I think you take away what someone loves, and all of a sudden it means that much more to them. They realize how much they miss it, and I think it’s starting to click in to him.

“This is his last go-around with it, so he’s really stepping into that leadership role and really trying to make a run as a team this year, so that’s really been a help for us.”

With the triple-double out of the way, Bagwell’s sole focus as a senior is now on winning the Colonial States Athletic Conference (CSAC) championship, which Cabrini hasn’t done since 2013-14, the last year under previous head coach Marcus Kahn.

For that goal, Cabrini is in good shape -- atop the conference at 8-1 and 13-2 overall, though there’s still work to be done. The road continues Friday at Marywood and then a rematch at Neumann on Monday, and Bagwell and the Cavs are dialed in.

“I’m not worried about the triple-double anymore. It’s over,” Bagwell said. “Whatever we can do for us to win. That’s what we’re focused on. We want to win.”