LANSDOWNE, Pa. -- Penn Wood and Academy Park were winding down what had been a back-and-forth, high-intensity game at Penn Wood.

And then all bedlam broke loose.

With just over a minute to play in the fourth quarter, a hard foul in the corner suddenly became a mass of people, as players, coaches and spectators turned what had been a high school basketball game into a massive brawl that spanned the entire court. It took the police and Penn Wood security several minutes to break up what became a torrent of shoving, fistfights and worse, with several people actually picking up chairs and appearing to hit other spectators and even players.

“We got fouled, and then [there was a] melee,” Penn Wood coach Matt Lindeman said. “I just saw, everyone [joined in] from over there” -- he gestured towards the bleachers, from where the first group of fans ran onto the floor. “It’s disappointing, it’s really disappointing."

I’m going to drop my “reporter voice” here for a minute and interject.

This wasn’t entertainment, this wasn’t a quick scuffle between two teams that just let the emotions get the best of them. This was an entire gym caught up in its emotions, and it could have been deadly.

I should be writing a story about Penn Wood senior Vontagoe Donzo, who made his return from a broken wrist suffered in the offseason to lead the Patriots to a comeback win. Instead, it is about people fearing for their personal safety at a high school basketball game. High school sports are supposed to be about love of the game, the purity of athletics. Instead, this was the worst side of sports, and of humanity.

In my now six years of doing this, I’ve seen quite a few fights on the basketball court, in regular season games, in AAU circuits, in practice games. It’s typically a few players, maybe occasionally several fans get in the mix. It’s usually broken up in under a minute.

This was on another scale entirely. And it lasted for far, far too long.

“It’s never gotten like that,” Lindeman said afterwards. “I don’t even know what to say. And what are you going to do when kids see other kids on the ground getting hurt? I don’t know what to do.”

Frankly, it’s disappointing behavior to see from any large group, especially for the adults who were involved in the fray -- plenty of students were in the mix as well, not to say they shouldn’t know better, but the next generation should certainly let cooler heads prevail.

I’m not really sure what the next step is from here. We shouldn’t have a need for large security forces at high school basketball games. It’s not like this is a super-common occurrence; I imagine I’ve covered about 600 high school games the last six years, and this is the first time I’ve felt the need to write this sort of piece. I hope I don’t have to write it again.

It’s the energy and passion behind the teams and the sport that makes it exciting to watch; if nobody cared, I wouldn’t be writing about this. But there’s no reason that it has to go anywhere near as far as it did tonight at Penn Wood.

Lindeman said he’s not sure what will happen with the game, whether Penn Wood will win 55-51, whether they’ll have to replay the game entirely or just the final minute. Also still to be determined is any fallout from the brawl; there are sure to be some suspensions doled out. 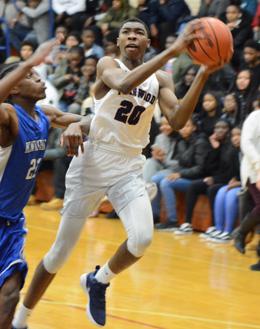 Vontagoe Donzo (above) made an impressive return from a broken wrist on Tuesday night. (Photo: Josh Verlin/CoBL)

Penn Wood’s Vontagoe Donzo stayed out of the fight. Which is good, because he played well, and I wanted to write about him.

Donzo took a bad fall in August while attempting a dunk, causing a fracture in his scaphoid bone of his right wrist. He underwent surgery in October after the fracture didn’t heal on its own, finally getting the cast off “two to three” weeks ago.

“It’s a mental thing, I think the tape was altering my shot,” he said, “so once I took it off, I feel like I was back to my previous self before I was injured.”

Donzo’s first points came on a pair of foul shots with three minutes left in the first half. The next possession, he found himself open from the left wing, so he let fly -- and hit nothing but net.

The crowded responded with another crescendo -- just like they did in the third quarter, when he became a force on the defensive end with four of his game-high six blocks, to go along with another two buckets. By the time the game was suspended, he’d racked up 13 points, seven boards, six blocks and a steal, and was a major reason Penn Wood turned an 31-19 halftime deficit into a 44-37 lead after three.

“That first [quarter], we just wanted to get some sweat and play, but after he got back in there, kind of calmed down a little bit and let his energy and his skills show,” Lindeman said. “He just needed to get through that anxious nervousness, his first time playing since August pretty much. It was great seeing him out there, he’s a great kid.”