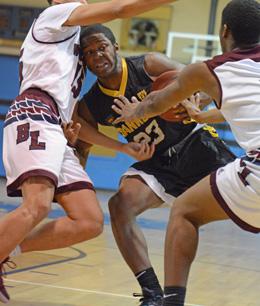 Scott Spann isn’t one to quietly put the ball through the hoop.

The Sankofa Freedom junior wing does so with gusto — every layup punctuated by a short yell, often a quick flex of his muscular arms.

It’s a display of emotion he says he’s always played with, inspired by NBA superstars like Russell Westbrook who don’t stay stone-faced on the court. But on Sankofa, it serves a purpose, firing up a Warriors’ squad that needs as much energy as it can muster to power its relentless pressure defense.

So when Spann hits shots, he screams.

“I’m usually known for bringing energy to the team,” he said, “so I have to start off the hype.”

Spann had plenty to yell about on Tuesday afternoon, as the 6-foot-2 junior wing had a tremendous all-around game to lead Sankofa to an 80-59 win over Boys’ Latin. Sitting all but a minute of the fourth quarter, he still finished with 21 points, 13 rebounds, six steals, six assists and a block for good measure.

It’s the type of effort that impresses head coach Isaiah Thomas, but no longer surprises him.

“Scott is the heart and soul, energy of the team,” Thomas said. “He doesn’t need much to get inspired to play hard. He’s one of the few kids I’ve coached that even when he’s not playing the best basketball as far as his skillset and his capability, it doesn’t stop his intensity and his level of energy that he plays with. You just can’t teach that intensity.”

Spann spent his freshman year at Hill-Freedman World Academy, where he didn’t even make the varsity squad for a team that plays in the lowest division of the Public League. Not happy at the school, he decided to transfer to Sankofa Freedom, closer to his North Philadelphia home.

Despite the fact that the Warriors are up in the ‘B’ Division of the Pub, Spann made the varsity team as a sophomore, becoming the team’s leading scorer as a sixth-man-turned-starter, playing mostly the ‘4’ and ‘5’ for a team that went 16-11 and made it to the second round of the PIAA Class A state tournament.

Spann spent the offseason making quite the change in his game, focusing on his handle and outside shot as the former ‘big man’ found his peers catching up with -- and surpassing him -- in height as high school began. Now he plays a hybrid wing role for Sankofa, which is sitting tied with Lincoln atop the Public League ‘B’ at 7-0 following Tuesday’s win; overall, the Warriors are 10-4 this season.

The transition to guard was in full effect against Boys’ Latin; though Spann got several buckets on put-backs, he had quite a few straight-line-drive layups off the rip, and even knocked down one of his two 3-point attempts. His passing was also impressive, including several no-long passes and one beautiful touch pass to classmate Khalil Turner off an inbounds play for an easy layup.

“His offseason was amazing,” Thomas said. “He came back this year and he plays more of the ‘2’ and ‘3’ for us, beating his man off the dribble, finishing at the rim, finding his teammates. It’s impressive, his progress is impressive.”

Turner, a 6-6 wing, led Sankofa with 22 points in the win, 19 of which came in the second and third quarters as the Warriors took a 13-6 lead after one period and continually expanded the advantage to 36-21 at half and 59-41 by the end of the third.

Junior guard Jabril Noble chipped in 11 points to round out the Sankofa double-figure scorers.

Boys’ Latin (8-6, 4-2) was led by 15 points from Jabril Lawson and 11 from Damien Sears, but the Warriors -- yes, both teams were the Warriors -- struggled with turnovers as Sankofa Freedom came away with 18 steals in the victory.

Sankofa’s showdown with Lincoln for outright first place comes next Tuesday at Lincoln. If it can survive that one (and one against Central on Friday) unscathed, Sankofa only has three more regular-season games to close out the Division title.

A couple of wins in the Public League tournament, and Sankofa will have qualified for the state tournament for the second year in a row. The odds are against the Warriors winning the overall Pub title -- ‘A’ Division teams like Imhotep Charter, Constitution and Martin Luther King will present significant roadblocks in that run -- there’s no doubt that Sankofa has what it takes to make a deep run in the state tournament.