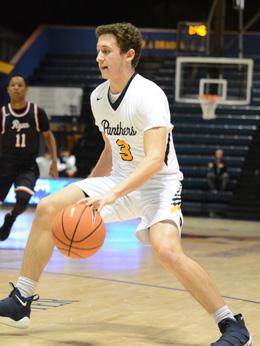 Cheltenham's Tim Myarick (above, in Dec.) sparked the Panthers to a win over Wissahickon on Tuesday night. (Photo: Josh Verlin/CoBL)

At the end of the first quarter against Wissahickon, Cheltenham needed a spark.

With the final seconds of the opening quarter ticking away, junior guard Tim Myarick caught a pass off of a defensive rebound, turned towards the basket, and launched the ball just before time expired. He was about 60 feet from the hoop.

Like any other shot from half court and beyond, the attempt was a mere desperation heave. A shot seldom practiced and rarely necessary, Myarick just looked at the hoop and let it fly. He stopped to watch the ball as it flew through the air, and he said he was expecting nothing more than a miss.

This time, he didn’t miss.

“It’s something we all do for fun at the end of practice,” Myarick said. “Zahree [Harrison] is the one who hits the most in practice.”

The basket may have only counted for three points, but to Cheltenham, it was worth much more. A six-point deficit was trimmed to three, and a disappointing first quarter of defense was put on the back burner.

“After it went in, my ears were hurting,” Myarick said. “The bench was going crazy, everyone’s energy skyrocketed.”

In the second period, Myarick sparked the Panthers yet again, this time with a 3-pointer in the corner with just five seconds left on the clock. Instead of trailing by one at the break, the Panthers led by two.

Though Myarick didn’t score again, the momentum he’d started carried onwards as Cheltenham pulled away from Wissahickon late in the third and early in the fourth, defeating the Trojans 76-61.

The Panthers (7-3, 3-0 Suburban One) outscored their hosts 18-6 in the final eight minutes, with their defense disrupting the flow the Trojans (6-4, 2-2) developed in the opening 20 minutes.

Myarick scored all 10 of his points in the first half, as he fought to keep the Panthers in a tough Suburban One battle. Despite lackluster defense in the opening half, the Panthers kept pace with a humming Trojan offense, thanks to their 6-3 sharpshooter.

“We are waiting for Tim, we watch him do this in practice,” head coach John Timms said. “Tim is a spark every time he comes into the game.”

Myarick was held scoreless in the second half, as the junior failed to register a shot attempt. Despite sinking four of his five shot attempts in the opening 16 minutes, he played limited minutes in the ensuing 16.

Timms said that Myarick has the potential to be a "15 point-per-game" player, but he's waiting for Myarick to take the next step, and turn his flashes of brilliance offensively into a better all-around performance over more minutes. While Myarick has shined in moments over the last two seasons, Timms wants the junior to earn himself a spot in the starting lineup.

That starts with his mentality on the court.

“I’m starting to get more confidence,” Myarick said. “I need to be aggressive and go to the basket more.”

In the second half, Myarick -- brother of Temple tight end Chris Myarick -- looked on and watched the Panthers’ tenacity first hand. Cheltenham turned over Wissahickon 16 times on the night, and smothered the Trojan offense in the fourth quarter. Jack Clark and Amir Lewis paced the Panthers offense as they scored 22 and 21 points respectively. Despite coming off the bench, Myarick was third in scoring with 10 points.

“He has to become a better on-ball defensive player, it’s all about tenacity,” Timms said. “Instead of a spark, we want him to be like a light. We’ve been wanting him to start since last year.”

Timms said that other teams will attack Myarick because he remains a bit of a liability defensively. Myarick knows this, acknowledges it, and uses it to fuel him.

“It gives me inspiration to stop my man and keep him in front of me,” Myarick said. “I know I have to improve my foot speed if I want to get better.”

The Panthers will be tested again on Friday night, as they host undefeated Plymouth Whitemarsh. They will need scoring from everyone, especially Myarick, as they look to avenge two defeats to the Colonials last season.

As the Cheltenham junior gets closer to breaking into the starting lineup, he knows the best way for him to earn his spot is to continue scoring and improve defensively. The Panthers like to play at a high tempo, with lots of ball pressure, a system Myarick has to be fully prepared to execute as he plays more and more minutes.

Timms is dangling the reward right in front of him, and he said the reward is coming if he continues to hit big shots, just like Tuesday night.

“The spot is there for him,” Timms said. “He’s just going to have to come take it.”