Here is our our first Division II Super 7 of 2018, with conference play in full swing:
~~~

7. Thomas Jefferson Rams (Last Week: 5)
Record: 10-7 (5-1 CACC)
Last Three Weeks: vs. Goldey-Beacom (W, 72-61), @ Franklin Pierce (L, 90-88), @ USciences (L, 64-54)
Star Watch: Kaison Randolph (Sr./G)
Update: The Rams extended their win streak to six against Goldey-Beacom, but then lost two straight in tough fashion, extending the game against Franklin Pierce for two overtimes and taking the lead in the final minute of the second extra period before coming up short, and then running out to a 20-4 lead at USciences on the road before the Devils came all the way back. In his 51 years at Textile/Philly U/Jefferson, Herb Magee might have his shortest roster yet, now that sophomore point guard Kylan Guerra is out with a foot injury; he’s got just five players who have seen significant minutes at this level, though now sophomore Jordan Purcell will be called upon to give several starters a breather. Randolph, a wing scorer by nature, will be forced to run point for the foreseeable future, and perhaps the remainder of his college career. 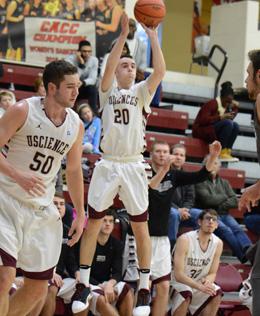 Brandon Starr (above) had two double-digit scoring efforts off the bench for USciences the last three games. (Photo: Josh Verlin/CoBL)

5. University of the Sciences Devils (6)
Record: 9-5 (5-1 CACC)
Last Three Weeks: @ Wilmington (W, 83-58), @ Goldey-Beacom (L, 76-52), vs. Jefferson (W, 64-54)
Star Watch: Brandon Starr (Fr./G)
Update: Figuring out 5-6-7 was a bit of a struggle, as USciences is above a Goldey-Beacom squad it lost to by 24, while Goldey is ahead of a Jefferson squad that beat it by 11. But considering both of those games were on the road, and USciences just beat Jefferson, this order made the most sense. Thanks to beating the Rams, the Devils are now tied atop the CACC South, and have recovered from losing three of four in November to win six of their last eight overall. Starr, a freshman guard out of Garnet Valley, has become the Devils’ sixth man due to his sharpshooting abilities, and he was crucial in the two wins, scoring 19 points (with five assists) in the win over Wilmington and then 15 points (with four 3-pointers) to help USci finish off the comeback over Jefferson. Senior Will Gregorits had double-doubles against Goldey and Jefferson; classmate Flo Da-Silva had 19 points, 10 rebounds, six steals and five assists in the win over Wilmington.

4. Shippensburg Raiders (4)
Record: 9-3 (5-2 PSAC)
Last Three Weeks: @ East Stroudsburg (L, 79-90), vs. Millersville (W, 94-72)
Star Watch: Dustin Sleva (Sr./F)
Update: The East Stroudsburg loss ended a five-game win streak for Shippensburg, and now the Raiders are one of three two-loss teams in the PSAC East that all find themselves suddenly chasing West Chester. Two days after handling Millersville at home, now Ship has to go on the road to face a tough Kutztown squad, and the loser will find themselves with an increasing amount of ground to make up from the top. Sleva put together a 23-point, 11-rebound, three-block effort in the loss to East Stroudsburg, and then was one of five Raiders in double figures in the win over Millersville, with 16 points, nine rebounds and five assists. The Shippensburg bench deserves mention for shooting a combined 11-of-13 from the floor between Na’Quan Council, Jake Biss and Joe Marshall, who combined for 27 points in the win.

3. East Stroudsburg Warriors (3)
Record: 9-3 (6-2 PSAC)
Last Three Weeks: vs. Mansfield (W, 88-63), vs. Shippensburg (W, 90-79), @ Lock Haven (L, 89-82)
Star Watch: Steve Harris (Sr./F)
Update: Really, the Warriors deserved to drop a spot, as the loss to Lock Haven was their third in the last five games. But we couldn’t drop them two spots, and considering they beat Shippensburg last week, for now they’ll stay No. 3. But with a tough two weeks ahead, another couple losses could see them breaking the PSAC hold on the top four spots; on the flip side, five wins would certainly upset the balance of power as well, considering they get both West Chester and Kutztown in the next fortnight, as well as a never-easy trip to IUP. As is typical for Jeff Wilson’s squad this year, ESU got strong contributions from up and down the roster the last few weeks, but fifth-year big man Harris put together 16 points and seven boards against LHU after going for 16 and 11 boards against Mansfield. 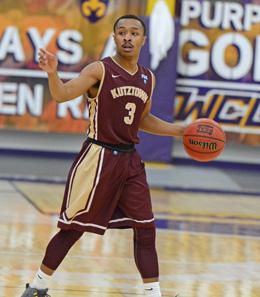 Ethan Ridgway (above) had his 1,000th point and moved into 9th on the PSAC assist list this week. (Photo: Josh Verlin/CoBL)

2. Kutztown Golden Bears (2)
Record: 10-2 (6-2 PSAC)
Last Three Weeks: @ West Chester (L, 95-89), vs. Bloomsburg (W, 97-92), @ Edinboro (W, 91-89)
Star Watch: Ethan Ridgway (Sr./G)
Update: The battle for the top of the PSAC went West Chester’s way, so Kutztown finds itself in that three-way tie for second, with games against two teams it’s even with coming up, starting with Shippensburg on Monday night. Ridgeway had a big week, scoring his 1,000th point in the win over Edinboro, then later in the game hit the game-winning bucket to cap off an 18-point, 14-assist game; the 5-9 guard out of West Chester Rustin is up to 558 career assists, which is ninth in PSAC history. Redshirt junior guard Anthony Lee, the Golden Bears’ leading scorer this season (23.6 ppg), dropped 34 points against West Chester -- 26 in the second half -- and then had 25 against both Bloom and Edinboro. He’s an incredibly efficient scorer, as well, hitting 58.4 percent overall, 55.7 percent from 3-point range and 2.6 percent from the foul line.

Record: 12-0 (8-0 PSAC)
Last Three Weeks: vs. Kutztown (W, 95-89), @ Millersville (W, 75-73), vs. Mansfield (W, 72-63)
Star Watch: Jackson Hyland (Sr./SF)
Update: There’s no doubt who’s the top dog in the area Division II landscape at the moment. West Chester’s best start to a season in program history continued to a dozen straight wins, though none of the three teams they played after Christmas break made it easy. They’ll finally have to travel to one of their main challengers on Jan. 20, but by then the division lead could easily be three games with all the other matchups happening. The Rams are getting terrific production from their wings, including Hyland (17.5 ppg, 4.5 rpg), Tyrell Long (19.1 ppg, 7.3 rpg) and Frank Rokins (12.2 ppg, 8.4 rpg); Hyland had 23 points on just six shots (6-6 FG, 2-2 3PT, 9-11 FT) in the win over Millersville, with three rebounds and four assists. This is a WCU team that thrives off its defense, and the way they’re playing, it’ll take a 40-minute effort to hand them their first loss.