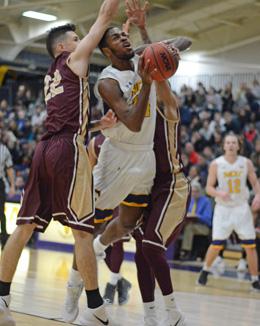 Tyrell Long (above) and West Chester are 10-0 for the first time in program history. (Photo: Josh Verlin/CoBL)

The combination of individual success and team achievement is something that had thus far eluded Tyrell Long.

A 1,000-point scorer at Philadelphia Catholic League member Bishop McDevitt, Long went under-the-radar during his prep years, at a program that’s not exactly a powerhouse in the toughest league around. Long’s Lancer teams never finished better than 14-10 overall and never had a winning record in league play during his four years there. In the three years after Long left, McDevitt won a grand total of 10 games.

In his first two years at D-II West Chester, Long wasn’t a stranger to the court, playing in 47 games with 14 starts, though he was outside the Rams’ top six scorers each year. But he was playing on a much higher-caliber team; West Chester won 23 games in 2015-16, Long’s sophomore season, and made it to the NCAA Tournament after losing to Mercyhurst in the Pennsylvania State Athletic Conference (PSAC) championship game.

Long broke through personally as a junior, averaging 17.8 ppg (second on the team) and a team-high 9.7 rpg. But the Rams went just 14-15 overall and 11-11 in league play the year after finishing as the conference runner-up.

Now, finally, everything is coming together.

The only senior on the West Chester roster is playing exactly like he’s supposed to in his final year in college.

“You have to recruit kids that are die-hard basketball players -- and what I mean by that is, gym rats,” West Chester coach Damien Blair said. “Because no longer do you find those types of kids. Now kids just want all the glory, they want to be on Instagram and Twitter, showing everyone how many points they had.

Long had intended on going to Cardinal Dougherty High School, to follow in the footsteps of Cardinals greats like Kyle Lowry, Shane Clark and more. But Dougherty closed in 2010, when Long would have started his freshman year. So instead, he went to Bishop McDevitt, the next-closest Catholic school to his home in North Philadelphia’s East Oak Lane section

By his junior year at McDevitt, he was the team’s leading scorer (19.1 ppg), and he improved upon that by averaging 21.5 ppg as a senior. A lanky 6-foot-4 wing, Long played all five positions for the Lancers, though typically serving as a slashing ‘3’/’4’ who played very well at the high post in the middle of a zone defense.

“When we recruited him, we didn’t know what position he was going to play, because he didn’t handle (the ball) really well,” Blair said. “I was in the stands watching a game with [Shippensburg head coach Chris] Fite and we were trying to figure out if we were going to offer him or not, and I said ‘you’ve got to take him, because he finds a way to score.’”

Long has certainly done that at the next level, on pace to become the 25th player in West Chester history to surpass the 1,000-point mark; if the Rams win a few playoff games, he’s got a decent shot at entering the top 20.

But he’s still a bit of an enigma on the court.

“I still don’t know what position he is, I’m not going to lie to you,” Blair laughed. “He can play multiple spots: he brought the ball up some tonight, played some ‘4’, played some ‘2’, played some ‘3’. He’s got to get stronger and improve his perimeter shot, and if he can do that he can definitely make some money.”

Long is aware that top-level Division II players frequently find their way overseas -- perhaps not to the top Euro leagues like Spain and Turkey but to several others. He spent this summer, as he has the last few years, working out at Fidonce Player Development with trainer Pooh Evans, alongside current pros like Dion Waiters, D.J. Newbill, and others.

“I was holding my own, that gave me more confidence coming into this year, knowing I could play with those guys,” he said.

But this season holds far too much promise for him to think ahead just yet.

Long is a major reason West Chester is off to its best start ever, currently up to No. 25 in the latest D-II national poll. Blair’s squad has already scored wins over Indiana (Pa.), Wilmington, Mercyhurst and Bowie State, and has five players averaging double figures, including Long, junior wing Jackson Hyland (17.1 ppg) and JUCO transfer Frank Rokins, who’s averaging 12.3 ppg and 8.9 rpg despite standing just 6-3.

In beating Kutztown, the Rams chased away a major demon. The Golden Bears had won each of the last six meetings between the teams -- “[a]nd not only did they beat us those six times,” Blair said, “but they were in important games.” The first round of the 2016 NCAA Tournament was one, the quarterfinals of the 2017 PSAC tournament was another, in addition to winning all four regular-season matchups.

The streak almost hit seven on Saturday, despite the fact that West Chester held a 21-point lead with under 14 minutes to play.

Kutztown (8-2, 4-2), led by former West Chester assistant Bernie Driscoll, has won the PSAC East each of the last two years and is once again right in the running, led by senior guard Ethan Ridgeway, redshirt junior guard Anthony Lee and junior forward Dan Cuevas. The Golden Bears made a strong second-half push, led by Lee, who scored 26 of his game-high 34 after the break; Kutztown had two chances to tie or take the lead in the final 30 seconds, but couldn’t connect on either, and West Chester survived.

“Coach texted us a good motivational speech yesterday and I texted him back, ‘unfinished business,’” Long said. “(Kutztown does) an unbelievable job, got an unbelievable backcourt, so it feels real good to beat a real good team.”

The Kutztown game, though it was West Chester’s fifth in league play, was its first against a PSAC East foe. Division play now comes in earnest, beginning with a trip to Millersville on Wednesday. After playing five of their last six games at home, the Rams will play six of their next eight on the road.

Though the Rams will still have to prove themselves twice against the likes of fellow title-seekers Shippensburg and East Stroudsburg, as well as the return game to Kutztown (Feb. 3), right now they’re the only team in the league with a spotless record.

“Our core guys have been talking all summer how we want to lead the team, set an example for everybody, play confident and have belief in everybody that we could have this kind of start,” Long said. “We didn’t have any doubt that it could happen.”