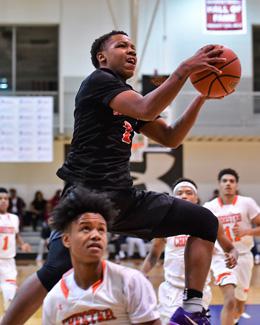 Below our are staff’s picks for standouts; recaps of the games can be found here.

Jhamir Brickus (2020/Coatesville)
Coatesville coach Chuck Moore said the Red Raiders have started to run their offense through Brickus as of late. The sophomore showed why on Friday, scoring 27 points in Coatesville’s 68-46 win against Chester. At 5-foot-9, Brickus is very quick and has a terrific handle, which makes him extremely difficult to stay in front of. He used the dribble to both get to the hoop, and open up his midrange game, where he was very effective. He also knocked down two threes, showing off a sweet stroke.

Ed Croswell (2018/St. Joe’s Prep)
Croswell put on a masterclass of a performance for a 6-foot-7 big man. With a game-high 22 points and 21 rebounds, Croswell led his team to a victory over Cheltenham 68-52 while earning MVP honors for his game. Croswell showcased his ability to grab rebounds in tough spots and turn them into points on second-chance, third-chance and even fourth-chance opportunities. Croswell also displayed his shot-blocking abilities, swatting two shots away as well.

Eric Dixon (2019/Abington)
No matter where he plays, Dixon is always productive, and that didn’t change on Friday. The burly 6-7 left-handed forward paced the Galloping Ghosts with 23 points in their loss to Archbishop Carroll, grabbing six rebounds as well. Relentless in post-up situations, Dixon has no trouble catching and finishing through traffic with either hand, and he’s got the feel and body control to make adjustments and get the ball through the bucket even when he’s bumped off his line slightly. A capable jump-shooter, he also knocked down one 3-pointer on two attempts.

Jack Forrest (2019/Lower Merion)
Forrest did a little bit of everything for the Aces in their 59-47 victory over Academy Park, but most notable were his game-high 26 points on an efficient 9-of-16 shooting from the field. The 6-foot-4 guard was equally steady at the line, connecting on four of his six attempts, while shooting 4-of-8 from beyond the arc. Forrest was a consistent contributor from start to finish for Lower Merion, scoring at least six points in each quarter; the junior’s best frame was the first, during which he had eight of his team’s 10 points. He also added four rebounds, two steals, two blocks and an assist.

A.J. Hoggard (2020/Archbishop Carroll)
Hoggard filled up the statsheet scoring 14 points, grabbing 10 rebounds and giving out seven assists in route to Archbishop Carroll’s victory over Abington on friday night by a final score of 70-56. In front of coaches from Seton Hall and Rutgers (both of which he holds offers from) Hoggard used a bevy of quick, shifty moves to get to the basket or the fancy, body twirling passes to kick out for an open three. He also showed his strength on the glass by hauling in 10 rebounds.

Mikeal Jones (2020/Girard College)
Particularly in the earlier portion of his team’s 69-50 loss to Malvern Prep, Jones dominated inside on both sides of the floor. In the first quarter, he was unstoppable, amassing a quick nine points and six rebounds to help his team open up a 15-8 advantage. Jones slowed down from there, but ended up with a double-double on 13 points and 10 boards. At 6-foot-7, the sophomore’s size and physicality allowed him to make a handful of nice plays through contact, especially early on.

Deuce Turner (2020/Malvern Prep)
With 20 points and seven rebounds, Turner was named MVP of his game for the Friars, a 69-50 win over Girard College. Turner made his presence felt all over the floor on offense, scoring both inside and outside of the lane and connecting on one triple. The talented sophomore was most potent with his mid-range pull-up jumper, which he showcased on more than one occasion as the Friars remained in control in the second half. Turner’s ability to create his own shot was key for Malvern being able to keep a comfortable lead down the stretch.

Ahmad Williams (2018/Plymouth Whitemarsh)
Williams led the Colonials in scoring with 15 points in a 64-60 double overtime win against Bonder Prendergast. The 6-foot-2 guar also showed good vision as a passer, picking up three assists. On defense, he really did a good job of guarding Bonner’s Isaiah Wong late, forcing the ball out Wong’s hands at the end of both overtimes. Williams also grabbed four boards. He likely would have had a chance to sink the game-clinching free throws at the end of regulation, but was called for a questionable travel after securing a rebound.

Isaiah Wong (2019/Bonner-Prendergast)
Plymouth-Whitemarsh  kept Wong in check for most of the first half, holding him to just five points. But Wong got things going in the second half, scoring 13, including eight in the fourth quarter, as he helped Bonner climb back from a double-digit deficit. Even when his offense was struggling, Wong was still a playmaker for the Friars, finishing with four assists. He used his length defensively to get in the passing lines, picking up a pair of steals.