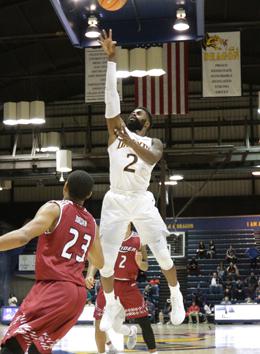 Tramaine Isabell (above) has jumped right in to become Drexel's most productive player. (Photo: Mark Jordan/CoBL)

With the season at its midpoint and most of the non-league games in the record books, the CoBL staff is taking a peek around the City 6 to see how each of the teams have fared this far.

Here’s a look at the Drexel Dragons as they prepare to enter Colonial Athletic Association play on Saturday against Elon:

Tramaine Isabell is a real talent
The Drexel coaching staff knew they had something good in Isabella, a 6-foot-1 guard who spent his first two years at Missouri before sitting out last season due to NCAA transfer regulations. But in the 10 games he’s played -- starting five of them -- Isabell has been the best player on the Drexel roster and then some, leading the team in scoring (19.5 ppg) and rebounding (8.1 ppg), displaying tremendous athleticism and play-making abilities with the ball in his hands. He’s the most dynamic scorer the Dragons have had since Damion Lee last donned a Drexel uniform, and he’s helped make them even a little exciting to watch offensively, something that hasn’t been said about Drexel basketball in a long time.

The rebuild is still in its early stages
With the impressive play of freshman Kurk Lee Jr. last year, the addition of transfers Isabell and Troy Harper (Campbell) to the mix this year and a good group of upperclassmen all returning from last year, Drexel seemed to have the pieces to make a surprise leap up the CAA standings, though admittedly it would have taken the perfect mix to do so. Injuries seemed to derail that plan before it even got started, but even beyond that, it’s clear that Zach Spiker still has a ways to go to really get the Dragons clicking the way he wants. A team that wants to be reliant on the 3-point shot is shooting only 32 percent from deep against Division I opponents, and only 40 percent of their buckets are assisted, which is one of the worst marks in the country. They’ve been better at home (4-1), but coughed up a game to Bowling Green in the season opener. The league slate will still tell us plenty more about this group, but there’s going to be more bumps along the way.

When will the injury issues stop?
The awful injury luck has to stop for Drexel eventually...right? For the last six seasons, the Dragons haven’t been able to avoid multiple key players being lost for long stretches, and this year has been no exception. Miles Overton has played all of one game as he deals with a calf strain. Troy Harper hurt his shoulder after five games, and has yet to return to the court. Sam Green went down with a knee injury in game six, and he’s still sidelined. On top of that, Isabell hasn’t even been fully healthy, missing two games of his own, and Spiker has hinted that senior Sammy Mojica is playing at less than 100 percent as well. A nine-day layoff from the end of the non-conference slate until the beginning of CAA play might provide some time to get healed up; Spiker can only hope that’s enough, with games against UNC-Wilmington, Charleston, William & Mary following up the Elon game in a brutal start to the CAA slate.

What will Overton, Green and Harper be able to provide?

While obviously Spiker and the rest of the Dragons will welcome their perimeter depth back as soon as they can get it, it’s much less clear what exactly that will mean on the court when those three injured players return. Overton was up-and-down as a redshirt junior, making only 21 percent of his shots in his first eight games, though he did average 13 ppg on 37 percent shooting over a nine-game stretch later in the year. Harper, who averaged 13.5 ppg as a sophomore at Campbell, had made just 28.9 percent of his shots before his shoulder injury. And Green, who averaged 7.0 ppg in the team’s first four games of the season, only got three minutes in its fifth game and then injured his knee in his first minute of action in game six. Spiker might have a lot of options to throw out, but it won’t be much help if none of them are efficient offensively.

Updated Prediction
The preseason ninth pick in the CAA, Drexel looks like it might be able to make a little more noise in league play than it has been the last couple years, when the Dragons had just three league victories apiece. They’re only three wins off their total from last year overall, and should be getting a few more bodies back on the court in the coming weeks. Don’t look for them to win the CAA, but it’s possible that Drexel could make a push for a top-six spot and perhaps even a win or two in the league tournament in Charleston in March.