WYOMISSING — Boy, is it ever nice to have several experienced players who can play all five positions on the basketball floor — if the need ever arises.

And at Abington Heights, which brought back three starters from a talented club that reached the PIAA’s Class 5A semifinals before encountering eventual champion Archbishop Wood, having all-state veterans such as 6-5 senior Jackson Danzig and 6-5 junior George Tinsley is a huge deal.

Especially since Ken Bianchi’s Comets are dealing with some really, really lofty expectations — not only in the friendly confines of their own locker room, but also every time they open the front door and step out into their suburban Scranton neighborhoods or walk down some school hallway.

Well, Tinsley and Danzig certainly put on a show Wednesday night in the middle game of the Berks Catholic Holiday Play-by-Play Classic at Lloyd Wolf Gymnasium, as Abington Heights held on for a 66-63 triumph over a gritty Harrisburg club that refused to go away even as time wound down.

“Just do the same thing as last year, but we had to buckle down defensively and not gamble because we don’t have a 7-footer back there [Seth Maxwell].

Tinsley poured in 31 points and snared 11 rebounds, but he also dished out five assists and got a hand on four shots. Danzig finished with 20 points and five boards, but he also dropped nine dimes for a Comets club (7-1) that repeatedly went to the hoop whenever it solved Harrisburg’s trap.

Ky’aire Sumpter (19), Penn State football recruit Micah Parsons (15) and Tony James (10) reached double figures for the Cougars (5-2), the defending District 3 Class 6A champs, Parsons, who completed a double-double by yanking down 11 rebounds, suffered an ankle injury on the final play of the game and limped off.

Whether Parsons plays in Saturday’s game against St. Benedict’s Prep at Interboro is unknown — especially since he’s scheduled to leave for San Antonio the following day for an all-star football game. After that, he’s slated to enroll early next month at PSU and begin classes.

Even with Parsons tossing around his 6-3, 240-pound frame in the paint, Abington Heights still managed to shoot just over 63 percent (29-for-46) from the floor and assist on 24 of its 29 made field goals. Even in its half-court sets, the Comets were able to benefit from back-door cuts whenever Bianchi’s bunch found itself in 1-on-1 situations against overplaying defenders.

It also helped that Tinsley, Danzig and 6-3 junior Trey Koehler (4 points/3 assists) are big enough to see over most of the defenders that try to get into them and disrupt breathing patterns.

“Once we realized that they didn’t help off of those traps, it was really easy to get those back-door layups,” Tinsley admitted.

Koehler continues to recover from a nasty sprain that’s limiting his effectiveness, but his perimeter abilities concerned Kirk Smallwood and his Harrisburg assistants since they watched him light up Williamsport for 31 points (4 treys) before he went down with his injury.

So while Koehler wasn’t his usual self, Tinsley picked up plenty of slack by converting 14 of his 17 field-goal attempts and knocking down all three of his free-throw tries as the Comets ran their winning streak to four games since a 60-55 loss to Downingtown East in which they trailed by 18.

Danzig, meanwhile, was an efficient 8-for-12 from the floor and 2-for-3 from the arc. His floor savvy and remarkable stoicism — even under pressure — is surprising until one realizes that he’s the son of University of Scranton men’s basketball coach Carl Danzig.

Danzig, Tinsley and Koehler also were around the ball down the stretch as Harrisburg valiantly tried to turn the Comets over and up the pace even more.

Helps to have that experience.

“We’re always on the same page, so it’s easy to work off each other,” Tinsley remarked.

“They feed off each other,” Bianchi continued.

“Those two guys are very aggressive when they handle the ball,” Smallwood said, referring to Danzig and Tinsley. “They’re also tall enough to see over the top.”

If these guys make mistakes — and Abington Heights did cough up the basketball seven times in the fourth quarter (16 overall) as Harrisburg made its comeback try — they don’t hang their heads and languish on an error. They move on, regroup and get dug in for the next sequence.

Bianchi said former Abington Heights great J.C. Show used to harp about this all the time.

“He’d say, ‘The most important play in this game is your next one. Forget about the other stuff,’” Bianchi recalled. “And that was him telling that to the other guys.”

While a 10-0 run in the second quarter turned a 17-15 deficit into a 25-17 lead for the Comets, the second of Danzig’s treys ignited the burst while Corey Perkins added a layup, Tinsley canned a short jumper and polished off a conventional three-point play and Koehler finished at the rim.

Harrisburg had it to three several times, but a Koehler deuce off a Danzig dish sent the Comets into the lockers with a 35-30 lead.

“Most people will look at it as we benefited from that run, but I’ll look at it as we had three turnovers right at the end of the half,” said Bianchi, who began his head coaching career at Line Mountain in lower Northumberland County some 50 years ago and has won more than 750 games.

While the Comets led by as many as nine points several times after the break — Tinsley’s layup off a Jack Nealon dish had Abington Heights ahead 62-53 with 2:49 to go — Smallwood’s Cougars didn’t back down. So, when Parsons bagged the back end of a two-shot look with 55.7 left it was 64-60.

“It was the pace,” Smallwood said. “They’re not the kind of team that wants to do that for 32 minutes. Once we pushed it back in, everything went to our favor.”

Danzig made both ends of a 1-and-1 to keep it a two-possession game, but things got really, really interesting when Na’reece Glenn buried a banked trey from the left wing. Nealon missed a freebie, but the Comets stole the ball back only to see Koehler clank a pair with 8.0 seconds to go.

Harrisburg had a chance to pull even, but Glenn’s trey was off the mark and Koehler latched on.

“We had the shots and opportunities, but we’ve gotta finish,” admitted Parsons. “We didn’t get the whistle tonight. If we get the whistle, I think it’s a different outcome.”

So, whether Parsons pulls on a Harrisburg basketball uniform again, is uncertain. Once he’s at Penn State and taking classes, Parsons’ absence will be a definite. Until then …

“It’s the next guy up,” Smallwood added. “We have some players that are blooming and now it’s time for them. They’ve been blessed to practice against Micah every day.

“We’ll just see how they adjust to their new roles.”

Not at Abington Heights, where the Comets’ three returning veterans know what their primary roles are yet they could wind up playing any of the five positions on the floor. Whether that’s on offense or as part of a matchup 2-3 zone that Bianchi has installed doesn’t matter.

Right now, things are going well for the No. 6 Class 5A team in City of Basketball Love's rankings.

Yeah, I’m pleased,” Bianchi admitted. “We have a lot of things to cover, especially on the defensive end. But we’ll straighten it out.” 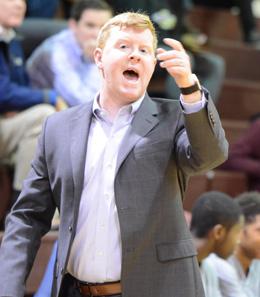 Bobby Jordan (above) and Girard College beat Berks Catholic in the finale of the tripleheader. (Photo: Josh Verlin/CoBL)

Trailing 24-21 at the halftime break, Girard College knew it was in a scrap against a Berks Catholic squad that was playing for the first time this season in Lloyd Wolf Gymnasium.

Of course, that’s exactly what first-year head coach Bobby Jordan anticipated from the host Saints when he scheduled the game in the first place. He figured a contest against a team ranked fourth in CoBL's latest Class 4A rankings would have a long-lasting positive effect on his bunch.

While we’ll have to check back in February and March to see whether or not that was the case, Jordan’s Cavaliers fought their way back and finally bounced out into the Arctic conditions with a satisfying 52-48 victory that would have everyone upbeat for their ride back to Philadelphia.

Saddled by two fouls in the opening half, Mikael Jones rebounded in the second half by scoring 12 of his 14 points to lead the Cavaliers (6-3). Daiquan Copeland added 12 more, while Brandon Smith pitched in with six for a GC program that returned everyone from the club that last March played for a Class A state title.

Helps explain why the Cavaliers are No. 2 in CoBL’s Class A state rankings.

Keba Mitchell netted 14 points — the 6-4 senior also got his mitts on several Jones shot attempts — to lead Berks Catholic (4-2). Snip Esterly’s patient Saints, who played significantly better than they did in a recent setback to St. Joseph’s Prep, also picked up 11 points from Tre Dabney.

“This was a game we thought could help get us prepared for the postseason,” Jordan admitted. “Playing in a hostile environment against a team playing its first home game of the season. We really want to use this game to prepare for the postseason by playing a tough opponent on the road.

“We made plays at the end which put us over the top,” Jordan added. “We stayed composed, which was probably the biggest thing down the stretch.”

Finally able to move in front 40-38 with seconds remaining in the third quarter when Rodney Carson pocketed a trey from the right corner, the Cavaliers did what they had to do in order to prevail.

Jones, Copeland and Kasim Toliver each scored four points in the final quarter for Girard College — the Cavaliers were a perfect 6-for-6 from the line in the final minute — which led by as many as six late.

With Michael Ruisch scoring 17 points and Jake Bartholomew chipping in with 16, Parkland held off a furious Carlisle rally and claimed a 55-52 victory in Game 1 of the three-bagger.

Andy Stephens’ Trojans (4-3) led by nine points (40-31) early in the fourth following Jared Kucharczuk’s 3-ball and looked to be in terrific shape, but the Thundering Herd fought back and tied the game (45-45) with 3:19 to play on a Ki Barnes trey. Parkland, however, didn’t bow to Carlisle’s momentum.

Following a Ruisch post move — Logan Rindock’s entry pass preceded the short turnaround — Rindock tacked on both ends of a 1-and-1 opportunity. Howie Rankine’s conventional three-point play pulled the Herd (4-4) within a single point at the 45.9 mark, but Carlisle would not get closer.

Rankine finished with 18 points for Andre Anderson’s Herd, who dropped their third game in a row.