Gwynedd's Will Davis reaping benefits of being slimmer 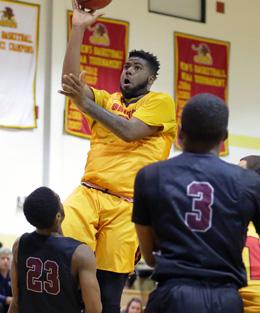 Gwynedd-Mercy's Will Davis (above) is having a breakthrough senior season after dropping 50 pounds. (Photo courtesy Gwynedd Athletics)

At the end of last season, Gwynedd-Mercy head coach John Baron gave his senior forward Will Davis a tall task: lose some weight before the start of next season.

“In his end of the year meeting, we talked about he’ll be as good or as bad as his weight,” Baron said. “He was still a talented guy even with weight, but it would’ve limited his mobility.”

Davis knew he needed to lose some weight, but having a constant reminder drilling that into his head helped him with the process.

“(Baron) told me every day [that] I needed to lose weight and I’d become the player that I wanted to become, and I still don’t think I’m the player I can be,” Davis said. “I think I’ve got a lot of work to do, but getting the weight down was really a big help to my game.”

An Olney-area product, Davis got into the sport of basketball as a kid when his father would take him to shootaround and play basketball in their neighborhood. He attended the now-closed Truebright Science Academy and played basketball there for three years, and then went to George Washington High School in the northeast to play his senior season.

After his year at Washington, Davis went to Manor College, a junior college in Abington; in his sophomore season, Davis averaged 24.4 points and 10.8 rebounds a game.

Once his time at Manor was finished, Davis had interest from schools away from home but ultimately decided that staying close, and attending Gwynedd-Mercy was the right decision.

“When I came on my visit here, Coach Baron made me feel like I was family,” Davis said. “I wasn’t really comfortable with going away to school real far, I had schools that wanted me real far but I just wasn’t comfortable plus my grandfather was sick so I wanted to stay close to him.”

But this season, in no small part due to that weight loss, Davis is a completely different player.

Davis had his best game of the year so far on Monday night, leading the Griffins to an 87-83 victory over fellow CSAC foe Rosemont College.

Davis tied his season-high in points with 29 while grabbing 12 rebounds, shooting 13-20 from the field and 3-4 from beyond the arc.

Monday night’s victory was the sixth straight for Gwynedd, lifting the Griffins to 7-1. Davis has scored more than 10 points in all of the team's victories so far this season; the 29 points marked the second game in a row he’d hit that number on the nose after putting in that amount in a win over defending league champ Cabrini.

“We lose if he’s not in the game the last two games, without a doubt,” Baron said. “He’s playing really well, he’s staying in games, he’s not fouling, and if he keeps doing that, we’re going to ride him as long as we can.”

On the night that Philadelphia’s own Kobe Bryant, who was known for his scoring, had both his iconic number 8 and number 24 jerseys retired by the Los Angeles Lakers, Davis had to give Kobe a little tribute of his own.

“My brother (Kareem Barksdale) used to play at Lower Merion with Kobe, he was the point guard so he was pretty good,” Davis said. “I’ve seen all of the state medals and trophies in our house.”